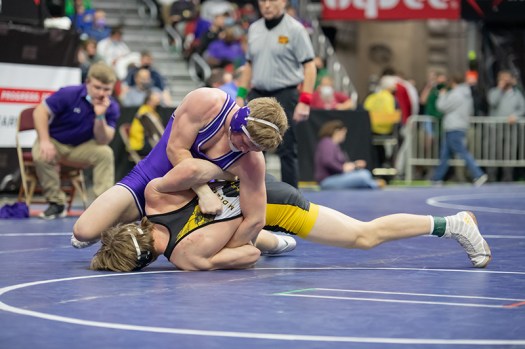 Lake Mills senior Casey Hanson flips his Midland opponent to his back Friday in the second round of the Iowa state wrestling tournament. Lory Groe/For the Albert Lea Tribune 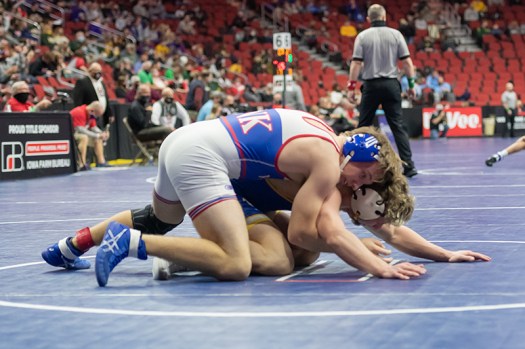 Northwood-Kensett junior Drake Tiedemann stays on top of his opponent in the second round of consolations Friday in Des Moines. Lory Groe/For the Albert Lea Tribune 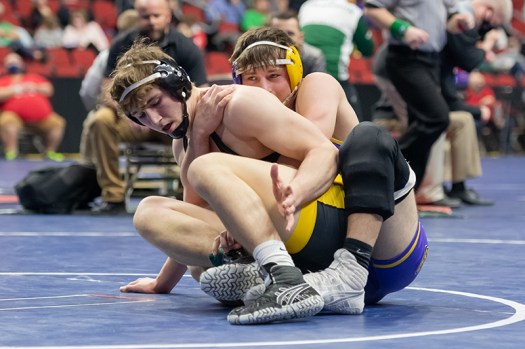 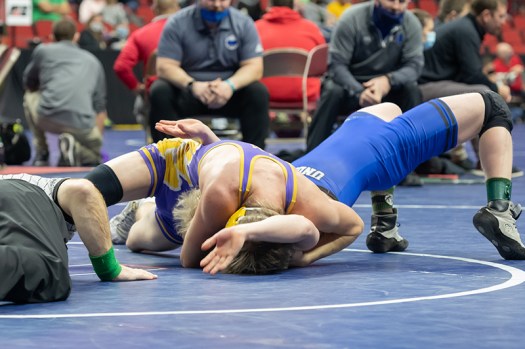 Senior Dalton Thorson pins his opponent in his first match of the day at the Iowa state wrestling tournament. Lory Groe/For the Albert Lea Tribune 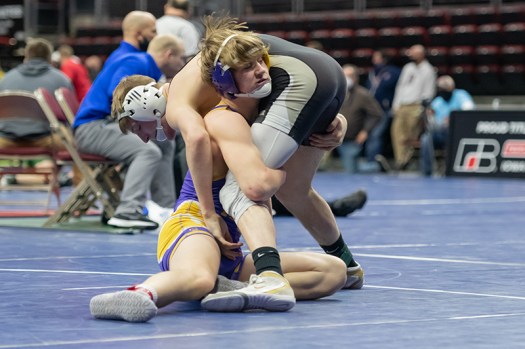 All six area wrestlers that earned a trip to the Iowa state wrestling tournament were still in the competition when day two started Friday morning.

Starting on the championship side of the brackets, Beaty was first up at 145 pounds. Beaty had the tall task of taking on undefeated No. 1 Robert Avila Jr. of Lisbon. Avila Jr. showed why he was ranked No. 1 in the state and defeated Beaty by pinfall in the first period.

The loss moved Beaty into the consolation bracket, where defeated Wayne-Corydon senior Jackson Cobb in overtime 6-4.

Beaty then lost to Jesup senior Jarrett Delagardelle in a 6-1 decision. Beaty will take on No. 6-ranked Garrett Sarringar of Sibley-Ocheyedan in the seventh-place match Saturday morning.

No. 3-ranked 160-pounder Hanson was up next, defeating his opponent by fall in the final 20 seconds of the match. The win came over No. 10 Caden Ballou of Midland, and advanced Hanson to the semifinals.

In the semifinals, Hanson met Don Bosco senior Cael Frost in a matchup between the No. 2 and 3 ranked wrestlers at 160 pounds. Hanson lost to Frost 7-1 and was sent to the consolation bracket, where he will take on No. 9 Bryar Subject of West Hancock. The match will take place Saturday morning and will determine if Hanson wrestles for third or fifth place.

In the same bracket, Tiedemann took on No. 4 Gabe McGeough of MFL Mar-Mac. Tiedemann and McGeough went back and forth through much of the match, resulting in an overtime period. Unfortunately for Tiedemann, McGeough recorded a takedown early in the period, winning 8-6 and sending Tiedemann to the consolation bracket.

Tiedemann won his first consolation match in a second-period fall over East Mills senior Jackson Wray. However, he came up just short in a 4-3 ultimate tie-breaker battle. Tidemann will wrestle No. 5 Gavin Maguire in the seventh place match.

Wagner, ranked No. 2 at 182 pounds, was the final wrestler to compete in the morning championship session. Wagner earned a pinfall over Midland junior Cayden Miller in the third period at 182 pounds. The win sent Wagner to the semifinal round, where he came up on the wrong end of a 3-1 sudden victory. The loss puts Wagner in the consolation bracket, where he will continue a quest for third place Saturday.

Thorson, who started his day in the 138-pound consolation bracket, won his first match of the day with a dominant pinfall in the first 20 seconds of his match against Underwood junior Westin Allen.

In the next round, Thorson battled hard but came up short in the 2-0 decision. Thorson will wrestle Randy Jiminez in the seventh-place match Saturday morning.

Peterson was the final wrestler to see the mat Friday morning. In the consolation bracket at 152 pounds, Peterson dropped his match to Lisbon junior Lincoln Houlb in a 9-7 decision. The loss ended Peterson’s season with a record of 34-9.