Daily COVID-19 update: 10 percent of Minnesotans have at least one vaccine dose 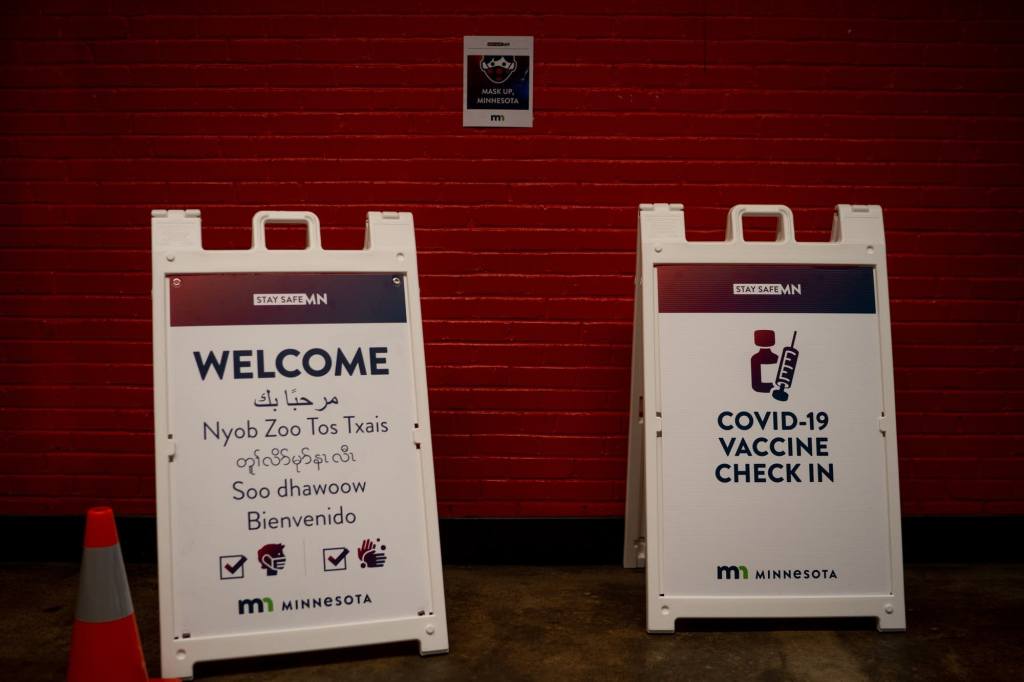 About 10 percent of Minnesota residents have now received at least the first dose of a COVID-19 vaccine.

The state reached that milestone in Sunday’s update from Minnesota Department of Health, reflecting data reported as of Friday. That’s just over 554,000 people. About 2.8 percent of Minnesotans — nearly 157,000 people — have received both doses to complete their vaccination.

And the state is slowly making progress in vaccinating people age 65 and older. Just over 27 percent of that age group in Minnesota have now received at least one dose of the vaccine.

But week-over-week, the pace of vaccinations in Minnesota in recent days is falling short. The state reported more than 43,000 doses administered in its updates each day the previous weekend, Jan. 30-31.

At the current rate, officials estimate it could take four months to vaccinate all Minnesotans 65 and older.

COVID-19 metrics continue to show Minnesota holding its own, at levels of new cases, hospital admissions and deaths at their lowest point since last fall.

Known, active cases stand at 8,594, similar to early October levels and still down significantly from around 50,000 in late November.

Ten newly reported deaths raised Minnesota’s toll to 6,299 on Sunday. Among those who’ve died, about 63 percent had been living in long-term care or assisted living facilities; most had underlying health problems.

The state has recorded 468,118 total confirmed or probable cases so far in the pandemic, including 914 reported Saturday. About 97 percent of Minnesotans known to be infected with COVID-19 in the pandemic have recovered to the point they no longer need to be isolated.

State officials continue to caution that the pandemic is not over yet, noting the new virus strains arriving in the United States, including including two cases of the Brazilian strain and 16 of the U.K. variant in Minnesota.

They’re also trying to dissuade people from attending big Super Bowl gatherings on Sunday given the ongoing worries about spreading the virus.

People in their 20s still make up the age bracket with the state’s largest number of confirmed cases — nearly 89,000 since the pandemic began, including nearly 47,000 among people ages 20 to 24.

The number of high school-age youth confirmed with the disease has also grown, with more than 36,000 total cases among those ages 15 to 19 since the pandemic began.

Although less likely to feel the worst effects of the disease and end up hospitalized, experts worry youth and young adults will spread it unknowingly to older relatives and members of other vulnerable populations.

People can have the coronavirus and spread COVID-19 when they don’t have symptoms.

Caseloads are trending down across all regions of the state following a late December, early January blip.

Even as new case counts continue to fall from their late November, early December peaks, the data shows people of color continue to be hit hardest.

‘Everyone is going to have to be patient’

State public health leaders have been pleading for patience over the pace of COVID-19 vaccinations.

More than 554,000 Minnesotans received at least one dose of COVID-19 vaccine as of Sunday’s report, which included data through Friday. That’s about 10 percent of the state’s population. About 2.8 percent had completed a full vaccine series.

Concerns continue to simmer over the speed of the effort — and the confusion it’s generated as people struggle to find out when and where they can get a shot.

Last week, officials said it could take up to four months to vaccinate Minnesotans 65 and older if the feds don’t deliver more vaccine faster; about 20 percent of that priority population has received at least their first dose.

“We are getting Minnesotans vaccinated safely and quickly as supplies come to us,” Kris Ehresmann, the state’s infectious disease director, told reporters Tuesday. But “we just don’t have enough vaccine and everyone is going to have to be patient.”

Minnesota’s getting some 84,000 more doses this week, which will be shared among tribal nations, people over age 65, educators, group home residents and others.

No new hospitalizations or deaths were reported.

No new COVID-19 deaths reported in the area