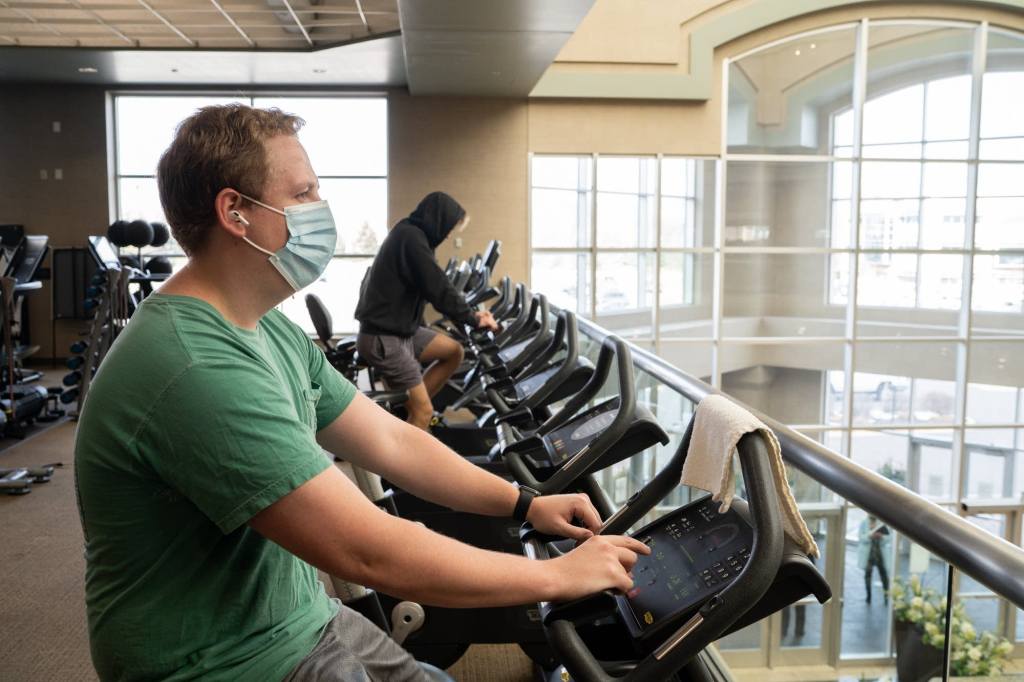 Liam Connery works out on an exercise bike while wearing a mask at Lifetime Fitness in Chanhassen in November. Gov. Tim Walz required masks in gyms in December, and now some Democrats in the Minnesota House want to make a mask requirement the law. Evan Frost/MPR News 2020

Democrats in the Minnesota House are considering making a mask mandate state law while Republicans in the Senate continue their efforts to limit DFL Gov. Tim Walz’s emergency powers.

Walz first required Minnesotans to wear face coverings in indoor public settings last summer as part of his strategy to slow the spread of COVID-19. Another order in December added gyms and fitness centers to the list.

Last month, Walz asked legislative leaders to enact the mask requirement and several other provisions to help wind down the peacetime emergency.

In a presentation to the House Health Finance and Policy Committee Tuesday, University of Minnesota professor Chris Hogan made the case for mask-wearing.

Rep. Sydney Jordan, DFL-Minneapolis, told committee members that her bill is a way for them to be involved in the pandemic response.

Under the proposal, anyone age 6 or older would be required to wear a face covering when indoors at a business or public setting or when riding public transportation. Temporary removal would be allowed under several scenarios, including while eating and drinking.

Several Republicans spoke against the bill.

Rep. Glen Gruenhagen, R-Glencoe, revealed to his colleagues that he had COVID-19 last year but said he doesn’t think a mask mandate is the answer.

“I think we need to emphasize prevention with people — not with masks, but with actual treatments that will help prevent them from getting the infection,” Gruenhagen said. “It seems like some of the medical community is waiting for people to get so sick before they do anything, then stick them in the hospital.”

The House committee did not vote, but the bill was held over for possible inclusion in a bigger bill.

Republicans in the Minnesota Senate are taking a much different approach. They are moving a series of bills aimed at limiting the governor’s emergency powers.

The Senate Civil Law Committee heard two of the bills Tuesday and sent them to the Senate floor for a vote. One would allow businesses forced to close or scale back operations during the pandemic to reopen if they have a plan in place for safe operation.

“Many of them are hanging on by just a fingernail right now, and we need to try to help give them a bit of certainty for them to be able to stay afloat as we continue to move forward in dealing with this pandemic.”

The other Senate bill would require legislative approval to extend emergency orders. Under the law now, the House and Senate need to take action to end an emergency, and that has not happened under divided government.

Sen. David Osmek, R-Mound, said his bill would require an affirmative vote from each body to extend an emergency.

“After 30 days, the legislative branches, the Senate and House, have to take an active role and vote to extend those orders,” Osmek said.