Empowering the community through art 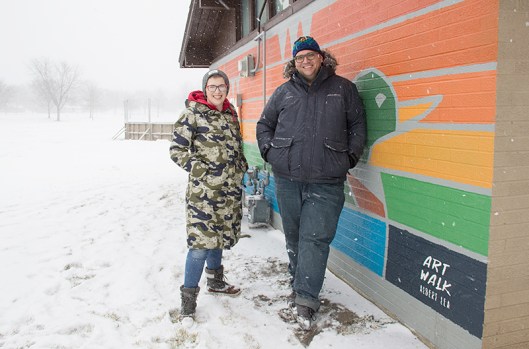 Holly Karsjens and Shane Koepke and a group of three others have helped a new initiative in Albert Lea called Art Walk Albert Lea, which aims to bring in more public art to the community. Sarah Stultz/Albert Lea Tribune 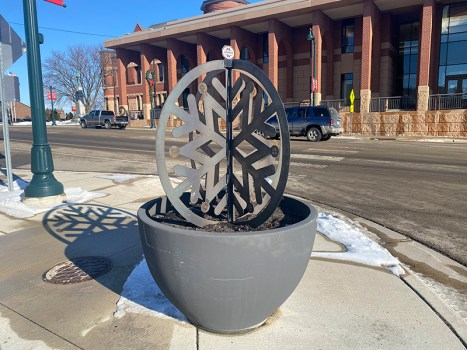 The metal snowflakes installed in the large flowerpots in downtown Albert Lea were part of an Art Walk Albert Lea project that was made possible with help from Riverland Community College. Sarah Stultz/Albert Lea Tribune

The design Ava Cunningham has created for the Academy Park warming house includes lots of color and a whimsical design. Provided

In its first year of existence, Art Walk Albert Lea has already started to brighten the community.

The group has set forth a goal to have 10 public arts projects by 2022.

“Good public art draws the community in — and makes people understand we care about this place enough to make it beautiful,” said Shane Koepke, one of the group members.

Another member, Holly Karsjens, who is also the executive director of the Albert Lea Convention and Visitors Bureau and Main Street Albert Lea program, said they have considered different types of public art and have visited other communities to see what is being done there, learning from their mistakes and successes.

Though the COVID-19 pandemic slowed them down a bit, the group has completed a community mural project at the Lakeview Park warming house and has another solo artist mural project slated for the spring at Academy Park.

Rich Finley, with the Industrial Maintenance and Machine Repair Department at Riverland Community College, helped organize a project of metal snowflake sculptures for the downtown flower pots that were installed in December, and in the spring they also plan to install a large metal picture frame near the mermaid at New Denmark Park, where people can take their pictures inside the frame with the popular landmark in the background. Other art installations are planned around Fountain Lake between the fountains near New Denmark Park and Fountain Lake Park.

As a downtown building owner, Karsjens said she has always wanted to have a mural on the side of her building, and she is hoping once she completes the process, she can be a facilitator through her own experience for others who might want to have a mural or other form of public art in the community.

“It’s really about empowering the community,” she said.

They are also considering murals in the alley between The Nasty Habit and Aragon bars, as Koepke said this would not only beautify that area but potentially contribute to reducing the amount of graffiti there. He said research shows graffiti is reduced in areas with public art.

Koepke and Karsjens said they hope the projects not only beautify the community but also help showcase the diversity in Albert Lea and help others feel included.

The projects in the historic downtown have to get approved through the Historic Preservation Commission, and others on city property have had to go through the Parks Board. Thus far, they have received funding through grants with Thrivent Financial and have also had private donations, as well as donations through Sherwin Williams and Doug’s Painting and Sandblasting in Albert Lea, who helped prepare the Lakeview Park warming house before the mural there was painted and then helped seal it once it was complete.

Karsjens said Art Walk Albert Lea is under the umbrella of the Main Street program, so if people want to donate to it, they can do so under that program.

Karsjens and Koepke said they don’t intend to take away from any of the arts groups already in town but instead hope to just add to them.

“The more successful art awareness we have in the community, the better,” Karsjens said.

She said while art not only is a benefit for residents of the Albert Lea community, it can also be a reason to bring people into the community.

“It’s becoming a reason people travel to areas,” she said.

If people want to get involved, they can call 373-2316 or email holly@explorealbertlea.com.