Funeral services for Erlys Wittmer, age 92, of Albert Lea will be held at 10:30 a.m. on Thursday, February 18, 2021 at Trinity Lutheran Church. Rev. Eileen Woyen will officiate. Interment will be at Graceland Cemetery. Visitation will be one hour prior to the service at the church on Thursday. Online condolences are welcome at www.bayviewfuneral.com. 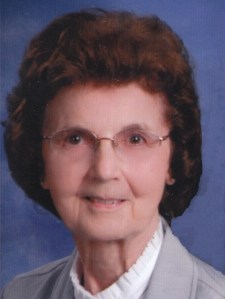 Erlys was born on May 1, 1928 in Mansfield Township to Ervin and Emma (Krueger) Wacholz. Her family lived and farmed in the Walters and Mansfield areas. Erlys graduated from Kiester High School in 1946.

On May 9, 1948 Erlys married Harlan Wittmer at Mansfield Lutheran Church. Together they had three children. Harlan and Erlys lived on their farm in rural Alden until 1989 when they moved to a condo on Lake Chapeau in Albert Lea.

Erlys worked at Osco Drug in Albert Lea from 1966 until its closure in the mid 1990’s. She enjoyed these years and valued the lasting friendships formed with several of her co-workers.

Some of Erlys’ hobbies included baking, crocheting, doing word puzzles and playing cards. She enjoyed birds, flowers, taking drives in the country and spending time with family and friends.

The care and well-being of her family were always of most importance to Erlys. During her lifetime, she officiated over many family gatherings, prepared many wonderful meals, crocheted an abundance of blankets and provided much good advice. She was faithful to her husband, her children and to her God. She was a homemaker in the truest sense of the word.

Erlys was preceded in death by her husband of 71 years, Harlan, parents, Ervin and Emma Wacholz and brother, Loren Wacholz.