From fees to IDs, a deep dive into Walz budget 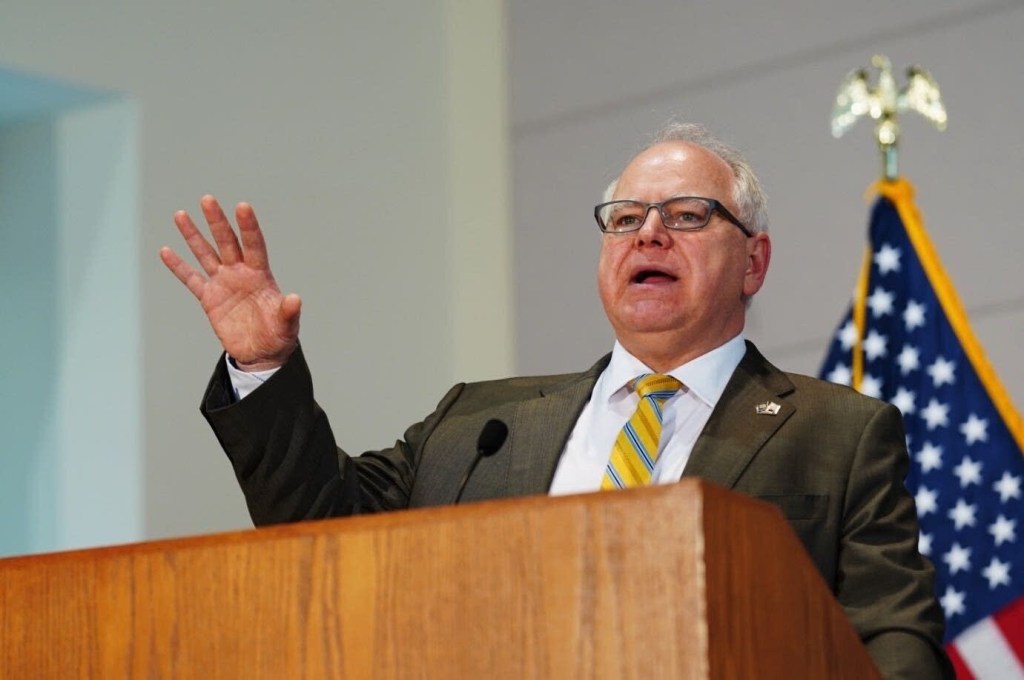 Lawmakers are diving deeper into the budget plan from Gov. Tim Walz this week. Items such as his proposed tax increases and additional school spending will dominate the debate between now and May.

But there are many changes people feel won’t get as much attention and maybe not as much pushback. They aren’t necessarily where the biggest dollars are, although several of the items have a good shot of actually happening. Historically, governors tend to get a fair amount of what they propose.

The Walz budget would increase the fees on new automobile license plates.

That’s because the restructuring is meant to tie the cost of producing and distributing the plates more closely with what’s charged.

There could be higher fees ahead for state park passes.

If the Walz plan goes through, annual permit fees for park entrance would go up $10 to $45. The daily pass would rise by $3 to $10. Together, there’s more than a half-million of these permits issued annually.

The Department of Natural Resources says more money is needed to shore up the finances of the state park system and prevent reductions in visitor services.

Boat registration fees would go up, with the amount depending on the size of a craft. The upcharge would be anywhere from $5 on a sailboat to $40 on a pleasure boat longer than 40 feet. The additional money would be routed toward improvements at public docks and measures to reduce the potential of aquatic invasive species spread.

Some are licensing fees tied to specific professions.

Pesticide fees assessed by the Department of Agriculture — a percentage based on gross sales — would tick up; the money would go for analytical equipment required for sensitive water-quality analysis.

The insurance industry would also see higher fees. They’d rise anywhere from a penny more to $175 more depending on the product or service. A few of the fees last went up in 1987, according to the Commerce Department. The money would be fed back into regulatory services and oversight of companies.

There are also things like the newborn screening fee. When a baby is born, there’s a battery of screenings done to test for dozens of disorders. The state wants to screen for a few more. So the cost would go up by $42. It’s $135 now.

The goal is to make sure there is appropriate follow-up when a rare disease is detected through the screening, allowing for quicker intervention. Budget materials say the fee is usually covered by insurance or waived in cases of financial hardship.

Across the budget and all agencies, the state would collect $61 million more than it was on track to bring in for fiscal years 2022-23. But because of some reshuffling, it adds up to less than what Minnesota collected in 2020-21, according to the Department of Minnesota Management and Budget.

Walz would reboot or ramp up some reviews when pregnancy ends in tragedy or infants die soon after birth.

The Health Department would restore its Fetal and Infant Mortality Reviews Committee. The agency would be able to access health, medical and autopsy records without consent of the parent or guardian when an infant dies before age 1 or a fetal death happens after 20 weeks of gestation.

Similarly, there would be more done into maternal death during or around childbirth.

In both cases, the reviews are designed to look at factors or conditions that might have contributed to death. And while mortality rates are low in Minnesota, the deaths that do occur tend to be among populations of color. Officials hope the studies help learn more about what’s leading to the poor pregnancy outcomes and what more can be done to prevent them.

As an October deadline approaches for people to get Real ID cards instrumental to air travel, the state is betting on a surge in applications. While the federal deadline has been moved before, further extensions are far from certain.

The budget would devote $2.4 million to additional staffing at Driver and Vehicle Services, which currently has a couple-month lag between the application and issuing of the security-enhanced ID cards. Staff working on those licenses must undergo extra training and pass FBI background checks due to the sensitive materials they use.

“Adding staff when the demand is greater will decrease the burden on current employees, and allow for better productivity,” the agency states in its budget materials.

The attorney general’s office would get a budget bump for a new antitrust enforcement initiative.

The $578,000 per year would pay for more attorneys to look into potential antitrust violations, from agriculture to health care.

“Increased resources will result in an increased ability to initiate investigations of anticompetitive conduct in Minnesota, and increased law enforcement actions to seek remedies for violations of state and federal law,” attorney general materials say.

The law would be changed to allow for high school students to receive benefits if they are laid off. A court ruling did that temporarily during the pandemic but legislative action is needed for the long term.

Employers currently pay into the unemployment insurance account for those employees, but the workers are not entitled to collect when their jobs are eliminated.

A set of programs would help thousands of students afford their college education.

For example, the state would put $17.5 million into a grant program to help workers whose industries were adversely affected by COVID-19. That would help an estimated 20,300 work toward degrees in new fields, the Minnesota Higher Education Services Office predicts.

There are also “hold harmless” provisions for students in the State Grant Program whose college educations were interrupted by the pandemic.

The Department of Agriculture would devote that money toward a trade representative in Taiwan geared toward food and farm exports. The agency says Taiwan is in the top 10 for U.S. exports and that its demand for agricultural products is only expected to grow.

Depending on the course of the pandemic, the effort could also include trade trips going both ways across the Pacific Ocean.

An additional $1.65 million over the two years would be put toward suicide prevention among military veterans.

According to the Department of Veterans Affairs, more than 100 Minnesota veterans die by suicide each year.

The program would feed collaborative efforts to get help to veterans regardless of where they live and what other life circumstances they face. It would help connect at-risk veterans with services related to housing, employment and mental health services.

While it’s less about dollars and cents, the Walz proposal would relax requirements around automobile accidents.

Currently, crash reports are required to be filed with the state for accidents with $1,000 or more in property damage. That requirement would be abolished.

It led to 11,000 crash reports being filed with the state last year, although very few of them were requested after the fact. And it was only a fraction of the almost 80,000 crashes, meaning it was mostly being ignored anyway.

“Generally, citizens do not understand the difference between the citizen crash report and the law enforcement report,” the Department of Public Safety budget narrative says.

Besides, state officials say $1,000 is an easy threshold to clear these days as more cars have bumper-to-bumper technology that turn even minor fender benders into high-cost repair jobs.