Fundraising started for new mural in the heart of Ellendale 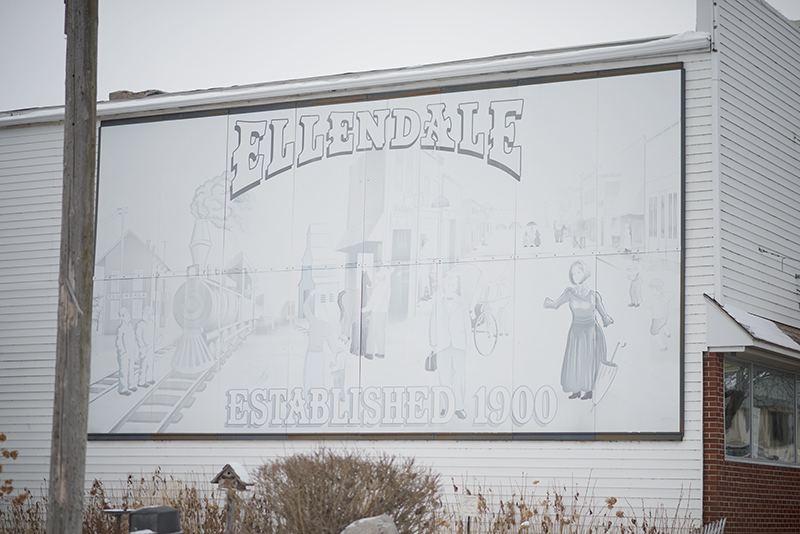 A fundraiser has recently been started to raise money to have a mural painted in Ellendale. Around $14,000 is needed for the project. The new mural will be painted by Chandler Anderson, an Albert Lea graduate, and will replace this old mural. Tyler Julson/Albert Lea Tribune

ELLENDALE — A large mural painted on the side of a cafe in Ellendale has long been a fixture in the community. Due to the paint on the old mural fading and washing away, Ellendale resident Gwen Reiss is leading an effort to raise funds to have the mural repainted with a new design.

The mural, on the side of the Ellendale Cafe on the corner of 5th Avenue and 2nd Street, has lost most of its color and the outlines of many of the figures have started to fade.

Reiss, owner of Two Doves Boutique across the street from the mural, said it’s time for the mural to be repainted.

“It’s going to be totally new,” Reiss said. “It will be honoring the history and the background of the city and its highlights, honoring who developed and who was the main core group that started the city.”

A large bulk of the funds is expected to be raised at the town’s Fall Harvest Festival and through donations.

Ellendale’s Fall Harvest Festival, scheduled for the first Saturday of October, will draw in many vendors from around the area to come and sell their goods. Located all on Ellendale’s main street, the vendors pay a fee to have their stands on the road. Reiss said the funds collected from the vendors will go towards funding the mural.

Reiss said some private donations have already been made by some businesses and individuals from in and out of the community.

“There’s a fund set up at the bank, and if they do want to donate, donate to the ‘Mural in Ellendale,’” Riess said. “It goes into the city’s account, so we didn’t have to open up a new account, but it’s designated for this mural. If they want a receipt, it’s a great tax write-off.”

The new mural is set to be painted by local artist Chandler Anderson, who is currently working on possible renditions of the mural. When the renderings are complete, they will be presented to the Ellendale City Council to be approved. Once approved by the council, the drawings will be put on display for the community to see and then vote on the one they wish to be used for the mural.

Reiss said there is no definite timeline for when the mural will be finished, it will depend on how fast they can get the money raised and when they can get the renderings in front of the council.

“It just needs to be refreshed,” Reiss said. “It needs to be redone, honoring Ellendale’s history and background. I think Ellendale is up and coming, and it’s just a pretty city.”