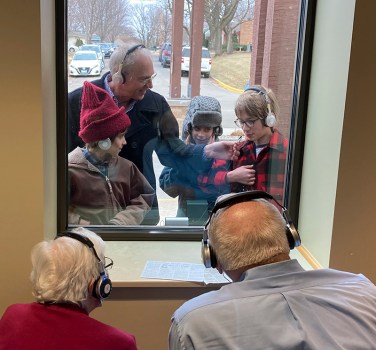 Thorne Crest residents Irvin and Mary Zenk enjoyed a visit with their son, Steve, and their great-grandchildren over the holidays using technology to communicate through the window. Provided 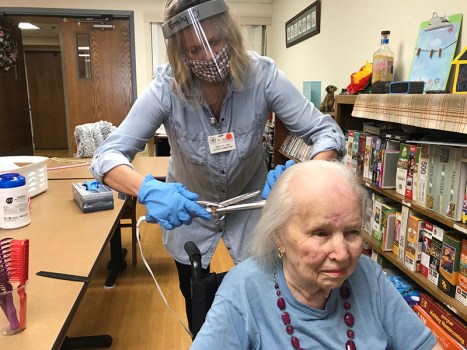 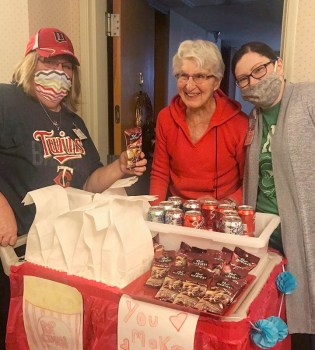 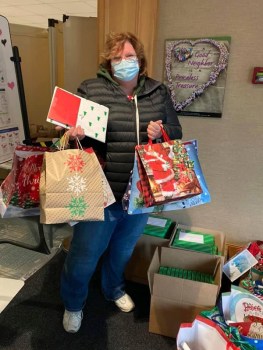 Jolene and the membership of Albert Lea Moose Lodge 1703 donated gifts for all Thorne Crest skilled nursing residents. Though volunteer efforts have looked different during the pandemic, they have still been critical. Provided

When COVID-19 surfaced in 2020, life instantly changed for residents of senior care facilities.

Visitors were restricted for much of the year, and staff at the facilities had to quickly alter their plans out of an effort to not only keep the virus at bay and to protect residents but to try to keep residents’ spirits high, despite all the changes.

Kathy Woodside, director of public relations, fund development and volunteers at St. John’s Lutheran Community, said when the pandemic began, the main goal at St. John’s was to keep as many activities the same as they could — though they had to modify how to engage residents.

Instead of gathering residents for special events, staff went door to door with special snacks or happy hour items.

The senior care center offered hallway bingo — socially distanced and with masks — and the organization’s pastor offered a hallway chapel service. The St. John’s location off of Minnesota Highway 13 also has a channel everyone can turn on to listen to the service.

“We’re trying to keep everything as routine as it can be so there aren’t a lot of changes, but how things got implemented was different to keep things safe,” she said.

Throughout the year, they collaborated on group dress-up days for staff and residents to keep spirits high and also tried different meal days. St. John’s offered hair, makeup and a photoshoot for women for Mother’s Day and offered activity packets that residents and tenants could pick up that included coloring pages and word searches. The care facility also partnered with other community groups to offer various parades outside of the facilities — everything from cars and motorcycles to emergency vehicles.

“We’ve been so blessed by the generosity of community members and stepping up,” Woodside said.

Because outside volunteers could not come indoors, decorating for the holidays took on a new feel. She said many people who live at St. John’s stepped up to help decorate, giving them a sense of purpose and community.

She said though the role of volunteers was different this year because they could not enter the buildings, their role was still critical, though in an unconventional way. Many made masks, greeting cards and lap blankets.

“Our volunteers pretty much stepped up, too, even though they couldn’t physically come in,” she said. “Those guys were pretty important to keep things running smoothly.”

As a whole, Woodside said residents have been understanding of the circumstances.

“Everybody’s been amazing and grateful and kind,” she said. “They know we’re all in it together. People are hopeful.”

Marilyn Claassen, activities director at Thorne Crest Senior Living Community who has worked at the care facility for 44 years, said Thorne Crest has been lucky to have music therapy twice a month offered virtually, in which residents use headphones and the organization’s Eversound system in their doorways to listen.

They have relied heavily on FaceTime and Skype to connect residents with their families, which she described as “a lifesaver,” as well as window visits. Now that the weather is colder again, Thorne Crest is offering people to come into the first set of doors at the exit on the southwest side of the building. The resident is within the second set of doors.

“It’s almost like being together, just separated by a sheet of glass,” she said.

They try to have ice cream treats in the evenings and still try to celebrate national theme days as best as they can. Despite the changes, birthday celebrations also continue.

Claassen said religion is a big part of the residents’ lives, so they offer a daily devotion with residents with the chaplain, Todd Walsh.

In addition, they offer hand and arm massages to relax the residents, as well as a game system called It’s Never Too Late with various games and brain teasers.

Like other facilities, they have offered hallway bingo, as well as exercise for each resident in their room. Residents have also taken advantage of walking in the hallways for exercise.

Claassen said as a whole, residents are coping well. She said she is grateful now that residents are able to come out of their rooms and socially distance. The beauty shop is also open again in the facility, which has been popular.

For a short time, Thorne Crest opened up the facility for essential caregivers on the health care wing, and there was a special room where those visits could take place for up to two hours. As of the middle of January, the visits were discontinued because of the high COVID-19 cases in Freeborn County.

Claassen said in all her years as activities director, this year has been one like no other.

Instead of planning months in advance, she has had to plan her calendar a couple weeks at a time because she’d never know when something would change.

She said there have been flu outbreaks previously in her time with the care center that lasted for just a few weeks and then life returned to normal.

“This has lasted a long time,” she said. ‘You just keep going. You keep each other going as staff. You try to do fun things with residents.”

She thanked various family members who have donated food items for staff and have helped boost staff morale.

The bistro has also reopened at the site, which gives residents and staff something to look forward to with special snacks and coffees.