Kyle Norman Wolfe was born March 14, 1959 to Dale and Charlotte (Christian) Wolfe in Kiester, MN and was joined by sister, Nona, 4 years later. Kyle took his last flight on February 12, 2021 after an impactful life which was cut short by pancreatic cancer. 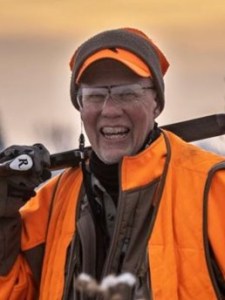 Kyle was born with an adventurous spirit. He was introduced to snowmobiles, airplanes and a love of the great outdoors from the start. Kyle grew up working at his father’s service station, East Side Motors, where he learned to fix everything, put things back where they belong and the ability to converse with everyone. As soon as he earned his driver’s license, he asked Becky Kruger on a date. She earned his heart including 10 years of courtship, 36 years of marriage and was his co-pilot for life. He graduated from Kiester High School where he played football, was in the National Honor Society, was a leader in many activities and played a decent trombone.

Kyle chose Winona State University for scholastic enrichment….. and the fact that the hills surrounding the river town were a playground to many outdoor adventures and afternoon hunts. While studying for college courses he also studied and earned his private pilot license.

Graduating a quarter early with three job offers, he chose Federated Insurance in Owatonna as his employer and promised to give it a two year try. This April would mark 40 years of employment and the number of colleagues who became valued friends is impossible to count. He continued to enjoy work as a business analyst into his last week on earth.

Kyle’s love of aviation drew him on a quest to find the airplane just like the one Dad Wolfe owned for much of his life. A vintage Cessna 170B became Kyle and Becky’s baby and opened the airways to a host of special friends. Magical memories include weekend flights to area fly-in breakfasts, a monthly “Third Thursday Burger Burn” and of course, camping under the wing at Oshkosh.

Someone invited the kid from Fed to the Owatonna Gun Club and it became part of the fabric of his life. He was a keen trap shooter and helped make the Gun Club tick. He was a board member for over 35 years. His impact on young shooters was profound and he treasured his time as a high school clay target team coach.

As hard as Kyle worked, his passion for the outdoors was greater. He looked forward to each new season with the anticipation of a giddy child. He cherished the new growth in the woods while waiting for a gobble and the challenging climb of a mountain trek in anticipation of a bugle. He knew the pain of a fall from a tree stand, but it dulled to the anticipation of the next quest. Kyle beamed with pride with each steady point of his pup, Jada. His fellowship with his hunting buddies was one of the most precious gifts he possessed. Even with chemo 2x a month, he achieved 90 days in the field in his final season of life. Weekends at the Whitewater cabin were more cherished than any exotic vacation.

He earned the title of Uncle Kyle and wore it proudly. Driving the yellow Easter Egg car (Izetta) to get ice cream or flying many children in his plane for their first plane ride brought as much joy to Kyle as it did to the youth. Throngs of people called him Uncle Kyle, even those not related. His scary campfire stories are legendary and led to sleepless nights for many little kids!

Wherever Kyle went, he made a significant impact on PEOPLE and his contributions include the Owatonna Gun Club Board, Wee Pals Board, Soil and Water Conservation District Supervisor, Owatonna Airport Commission, Federated Employees Credit Union Board of Directors Chair, Big Brother Mentor (Big Brothers Big Sisters), Owatonna Clay Target Team Coach and Board of Directors.

Blessed to be his family are his wife and best friend, Becky, Sister and brother-in-law, Nona and Tom Nesseth, nieces Clara and Celia Charlotte Nesseth. He is also survived by brothers-in-law and sisters-in-law, Raymond Kruger, Ron and Gail Kruger, Pam and Pat Cordova, and Mike and Dawn Kruger. Nieces and nephews Josh (Paige) Kruger, Chelsey (Zach) Hegge and Alex Kruger.

As Kyle’s season comes to a close, cherish the camaraderie, his oversized grin and the adventures you shared. Kyle LIVED life. Kyle always returned things in better condition than when he borrowed them. It seems he left all of us better than he found us. Smile when you hear an owl hoot or someone tell a scary campfire story. Honk when you drive past the cabin or rock your wings as you do a flyover. Smile when you yell, “pull” for a target. Remember him when you hear a rooster cackle or an ice cube clink in a glass of whisky.

As a fellow pilot bid farewell, “Blue Skies and Tailwinds, my friend!”

A private service is planned, and a celebration of life will be held as the Spring season of rebirth unfolds. In place of sending flowers, please donate to charities important to Kyle: the Owatonna Foundation, Owatonna Clay Target Team, Allina Health Hospice Foundation (Owatonna Designation), Kiester Fire Department or Kiester Ambulance. Ranfranz and Vine Funeral Home is honored to be serving the Wolfe family; to share a special memory or condolence please visit www.ranfranzandvinefh.com