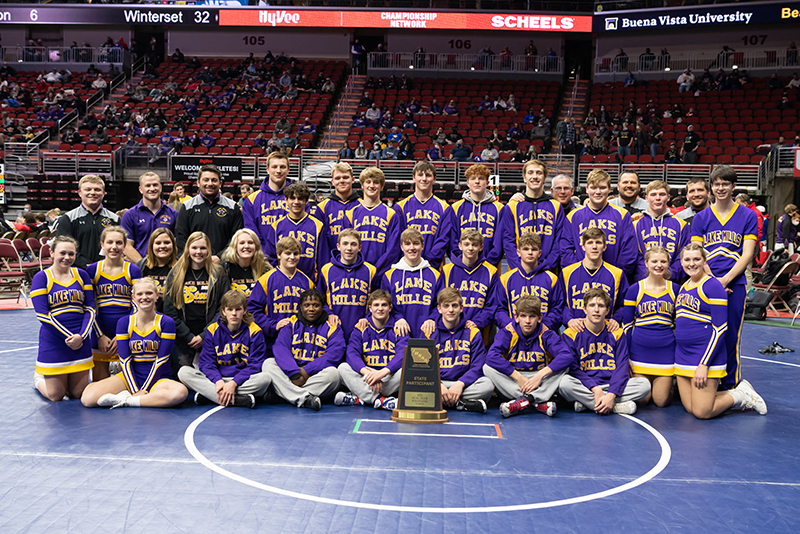 The Lake Mills wrestling team competed in their sixth consecutive state dual tournament Wednesday and secured yet another top-five finish.

The Bulldogs began the day with a slow start in their quarterfinal performance before bouncing back to win two straight to finish fifth.

The team opened the day against No. 5-ranked Woodbury Central, who came in with a 22-1 record. Lake Mills got off to a good start and led 24-15 halfway through the dual. However, the team dropped the next six matches and lost the dual, 45-27.

“We wrestled extremely poorly in the quarterfinal dual,” said head coach Alex Brandenburg. “There were a few highlights, but overall it was one of the worst duals we wrestled all season.”

The loss dropped Lake Mills into a consolation semifinal matchup with No.-8 ranked MFL Mar-Mac, which held a 23-1 record. The squad jumped out to a commanding 24-0 lead and never looked back, winning 45-27.

“What a turnaround this was by our team from the first dual,” Brandenburg said. “The effort was much better, and we finished out matches throughout the dual.”

The victory set up a battle for fifth against Top of Iowa Conference foe West Hancock, who came into state duals 21-2 and ranked No. 7. Just like the past five seasons at the tournament, Lake Mills saved its best performance for last. The lead bounced back and forth throughout, and the Eagles led 25-18 with four matches remaining. Fortunately for the Bulldogs, they won all four to win the dual 39-25.

“We take a lot of pride in finishing strong in our last meet each year at state duals,” Brandenburg said. “In this streak of six straight trips to Des Moines, we are a perfect 6-0 in the final duals.”

Lake Mills finishes the season with a 29-1 record.

“I am so proud of what this program has accomplished in recent history,” Brandenburg said. “To be able to place in the top 5 in the state each of the last five years is no small feat.”

One reason the program has excelled is the largest group of seniors the program has ever had with nine. The team will struggle to replace Caleb Albert, Casey Hanson, Charles Jackson, Lindeman, Ramaker, Thorson, Wagner, Bergo and Womack.

“This senior class will be irreplaceable,” Brandenburg said. “Their depth and quality have been an important asset of our teams each of the past four years.”