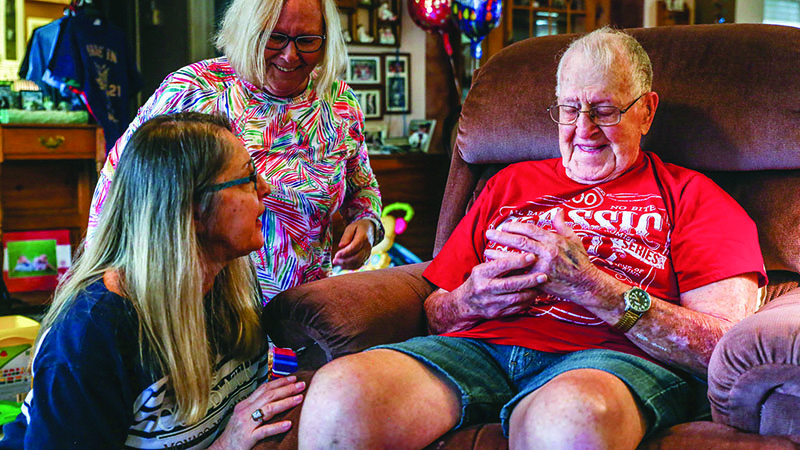 Don Dennis, with his daughter Shari Johnson, left, and family friend Camille Falconer watch as he tries on his lost wedding band that was delivered to him this week. Photo by Ben Johnson

Sometimes things just fall into place the right way in such a way as to feel it’s fate.

Recently, Donald “Buster” Dennis was the recipient of the fortuitous falling of the dominoes when after nearly seven years, his wedding ring was given back to him while staying with his daughter, Shari Johnson, in Florida.

From time to time these types of stories will pop up where one person finds something valuable and is able to return it back to the person who lost it; however, so many things went right in Dennis’ case as to seemingly defy reason.

“I was wondering where it came from,” Dennis said with a chuckle. “I couldn’t believe it. It was a big surprise.”

To know the significance of how far one ring can travel, you have to go back to the beginning when Dennis first lost it — while shopping at Aldi in Austin around six or seven years ago.

“I did a lot of thinking, trying to figure out where I might have lost it,” Dennis said. “It was found at Aldi, but I don’t remember losing it there.”

At the time, Dennis was married to Johnson’s stepmother, Katie Dennis, who passed away in December 2016. An inscription inside the ring read: “Katie to Don 10-25-75.”

In 2019, when Aldi was being renovated, the ring was discovered by workers as part of the demolition; however, the head of the crew, Judd Sachs, instructed them to toss things away as they worked.

But as an old desk was heading to the trash, Sachs heard something inside rattling around. He plucked out the ring — the first step in our progression of fate.

Sachs took the ring to his wife, Mandy Lusti, at their home in the Twin Cities and began talking about how they could return the ring to its owner. That was a year previous.

“We figured we could at least try, and then we kind of forgot about it,” Lusti said.

Even though there was an extended period of time between when it was found and this February, Lusti still believed they could find the owner.

“I did,” Lusti said. “We had a date and names. In small-town Minnesota the chances are better than a big city. You never know.”

They decided to use the power of social media and posted it on Facebook. As Johnson related, on Feb. 14, a friend of the family, Brenda Geisinger of Austin, visited Grace Lutheran Church, where Dennis and his wife went to church, to ask the congregation to send Dennis birthday cards for his 100th birthday a week later.

As she spoke, the minister of the church recalled hearing Don and Katie’s names, as well as seeing the post on Facebook about the lost wedding ring. Geisinger was connected to Lusti, who talked about the ring, which resulted in Lusti getting Johnson’s phone number.

As they talked, it didn’t take long for Johnson to realize the significance of the moment.

“I didn’t actually know it was lost because I kind of thought he put the ring away,” Johnson said. “It said ‘Katie to Don’ and the year, and I knew that it was dad’s ring.”

While the mystery had been solved, it wasn’t the end of the ring’s journey. Sachs and Lusti were heading to north Florida for vacation and would be just four hours away, providing a chance to get Dennis’ ring to him by his 100th birthday on Feb. 21, but the drive was too long.

But the tale doesn’t end here because fate had one more card to play. Johnson’s dear friend, Camille Falconer, who is also from Austin, also lives in north Florida and had plans to visit Dennis for his 100th. 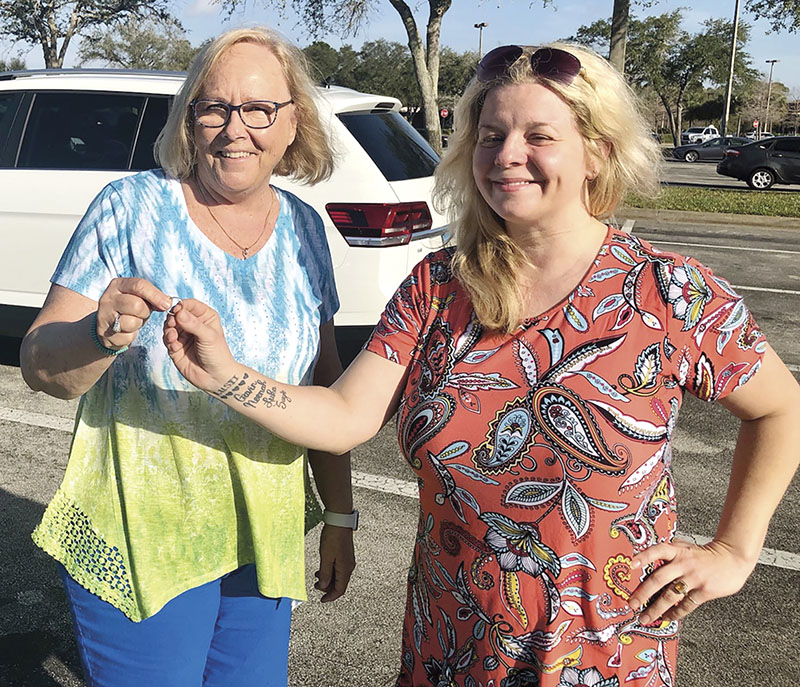 Mandy Lustei hands off Don Dennis’ ring to Camille Falconer who delivered the ring back to Dennis after around seven years of being lost. Provided

Falconer, who was close to where the couple was vacationing, met with them and carried the ring the rest of the way to give to Dennis, who was unaware the ring had been found.

“I thought that was a pretty nice thing for whoever found it,” Dennis said, chuckling, and adding, “I didn’t know what to do with it.”

The ring still fits, though it is a bit loose on his fingers, and until they can get something to ensure it stays put, Dennis isn’t taking any chances.

“I don’t want to do that again,” Dennis said.

For Lusti, who, along with her husband, was on the front end of this, the outcome was amazing to see.

“It was awesome,” she said. “I was so happy that he was able to get it back, let alone on his 100th birthday. The pictures (Johnson) shared were so cute and he looked so happy. It made me happy.”

But there’s more to this story and that’s the incredible chain of events made possible by caring people who wanted to ensure an heirloom was returned to the right place.

“It makes you feel good, especially in this day where so many sad things are happening,” Johnson said. “Every person you look at was critical in making this happen; a little staircase of little miracles along the way. It leaves you with a good, heartwarming feeling.”