The news traveled fast Feb. 12th on Instagram from Butch McGuire’s Saloon in Chicago: “Our beloved matriarch, Mary Jo McGuire, passed away last night. Although her warmth and humor will be missed more than words can express, her legacy lives on in her family and the great Butch McGuire’s family that she created. Surely she is in heaven, reunited with Butch and raising a glass to a life well lived. Celebrate her spirit with us by doing something nice for someone you love, a complete stranger or an animal in need of rescue. She would appreciate it.” During the next day, more than 800 had responded. 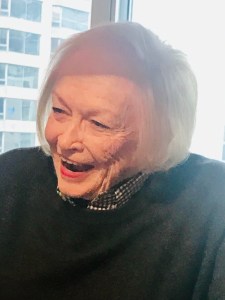 Mary Jo Donovan McGuire, 85, took over the saloon when Butch died in 2006. They had been married 42 years. Now operated by her son, Robert McGuire Jr., she remained involved in the family business until the day she died. She was blessed with an infectious laugh and many friends. The McGuires’ regular Monday night fried chicken dinners fed body and soul. Once a friend, always a friend. Mary Jo was born and raised in Albert Lea, Minnesota, the daughter of Joe and Lauretta Donovan. After graduating from Marquette University, she worked several lively years as an American Airlines stewardess. During this time she met Butch while perched on one of the bar stools he generously reserved for single women in the neighborhood. They had a long and loving marriage filled with laughter and lasting friendships. Mary Jo was a devout Catholic who found great comfort in her faith. She was also an irreverent and beloved grandmother who found her greatest joy in the love of her 7 grandchildren. She leaves a daughter, Lauretta (Bruce) Stewart of Potomac, Md., two sons, Bobby (Rachel) McGuire of Chicago, and Terrance (Lisa) McGuire of Aspen, Co.; seven grandchildren, Patrick, Connor, Riley and Cate Stewart and Maggie, Maeve and Hayes McGuire; her sister, Marcia Nicely of Kansas City and sister-in-law Janet McGuire of Chicago. Funeral Services were celebrated Thursday (Feb 18) by His Excellency, the Most Reverend William Byrne, Bishop of Springfield, MA at St. Joseph Catholic Church, Chicago.