Meeting the needs of a congregation 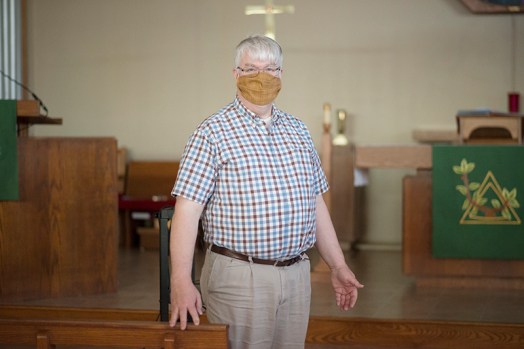 Mark Boorsma, pastor of Ascension Lutheran Church, found several ways to connect with his congregation during the pandemic shutdown, including virtual Bible studies, drive-up communion and calling his congregation members on their birthdays and anniversaries. Tyler Julson/Albert Lea Tribune 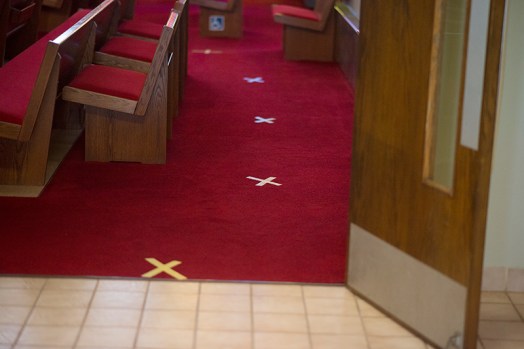 Xs mark the pathway from the doors into the chapel to remind people to stay socially distanced. Tyler Julson/Albert Lea Tribune 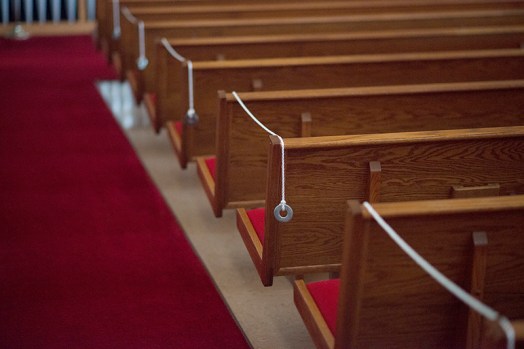 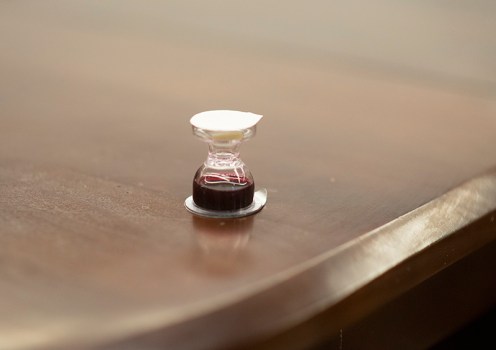 Ascension Lutheran has had a drive-up Communion available with disposable cups with grape juice and a wafer. Tyler Julson/Albert Lea Tribune

The COVID-19 pandemic that swept across the globe in 2020 impacted churches worldwide, and Albert Lea’s Ascension Lutheran Church was no different.

When it was announced that churches in Minnesota would temporarily be banned from holding in-person services, Ascension was not like many other churches in that they were unable to broadcast their services online.

According to the Rev. Mark Boorsma, the church wasn’t sure it had the broadband capability to pull off online services, let alone the equipment.

Instead of having services held at Ascension, Boorsma elected to take part in performing a part of the prerecorded services at First Lutheran Church, which broadcasts its services on KAAL.

When the Rev. John Holt of First Lutheran approached Boorsma and other area pastors about being a part of their service, Boorsma said it was an easy decision.

“The one thing about it that made it kind of a no-brainer for me was I’ve been hearing for years, especially from our elderly members, that whenever they couldn’t get to church, they would watch ‘Peace and Power,’” Boorsma said. “I already knew that was the go-to for most of our folks. It really was a no-brainer when the pastors at First Lutheran invited me to participate, I was like ‘Yeah, absolutely.’”

Even though Ascension wasn’t allowed to hold in-person services, that didn’t mean the congregation wasn’t finding creative ways to share the faith with one another.

“Even when people couldn’t come to church and put something in the offering plate, they were giving electronically,” Boorsma said. “They were mailing in their contributions. It was pretty inspiring to see pretty much every day’s mail brought another contribution. It was both humbling and inspiring.”

Another thing Boorsma has started doing in the pandemic is giving his congregation members a call more often. He keeps a list of the birthdays and anniversaries of each congregation member during the current month on his desk and will call each person that day to wish them a happy celebration.

When word came that churches would finally be able to hold in-person services again, Ascension quickly got to work forming a plan that would allow them to have services while also keeping the members safe.

The plan designated the ushers with a few more responsibilities, closed off all areas of the church aside from the chapel and bathrooms, sectioned off some of the pews and put Xs on the ground to remind people to distance themselves when entering the chapel. Masks are also required at all times, and frequently-touched surfaces are sanitized after each service.

Even though Ascension has gone back to socially-distanced services, Boorsma wants to make sure members of his congregation don’t feel like they need to be coming.

“We want people who choose to come through the doors to feel as safe as possible in a very scary time,” Boorsma said. “But we also don’t want any of our members to get the impression that they have to come in person, especially if they feel that they are a part of the vulnerable population.

“We don’t want to give the impression that we’re shaming anyone for not doing something they aren’t comfortable with. We want to meet the differing needs of as many congregation members as we can.”