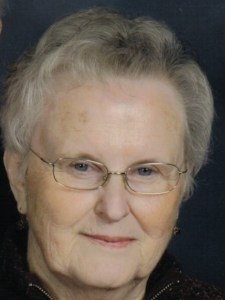 Millie was born on April 28, 1929 to Harold and Nelsena (Skow) Ferguson of rural Ellendale, MN. She grew up on the family farm learning and doing everything a dairy farm girl did. She taught herself to drive by practicing in the hayfield. She did get in trouble with Pop because the hay hadn’t yet been harvested.

Millie and her six sisters would sing while hand milking the cows. Pop would walk in, stop the singing and say, “closer harmonies girls, closer”. They became known through the area as the Ferguson Sisters, and sang together for the rest of their lives. Their repertoire included nearly every hymn in the Methodist Hymnal as well as many folk songs. Their favorite became “The Milkmaid”.

Millie graduated from Ellendale High School where she was a cheerleader and played drums in the high school band. Following graduation she started working for Bell Telephone in Albert Lea as a telephone operator and enjoyed talking to people all over the world. She always said she could find anyone in the United States if she knew a general location. She proved this several times. She loved technology all her life and was in the process of writing down her memories on her laptop at the time of her death.

Millie met her husband, Gerry, while he was building her parents retirement home. They married on May 2, 1952. They lived in several locations until they purchased their farm in rural Ellendale. Millie transferred to Bell Telephone in Blooming Prairie where she worked for several years. They milked Jersey cows and taught their children how to care for animals and how to work. She loved working in the yard and flower beds.

In 1972 Gerry built Millie her dream home in Ellendale where they lived for many years. Millie worked at Wilson Foods in Albert Lea as a telephone operator in the 1970s. She also worked part-time as a cook at The Ellendale Cafe and The Oaks Retirement Home. Gerry helped build homes for each of their children and Millie helped with the grandchildren. They lived in rural New Richland until Gerry’s health began to decline and then moved to Annandale and eventually into Centennial Villa Assisted Living.

Millie loved many things about Centennial Villa. She was able to socialize with her neighbors and made many new friends. She brought out several unknown talents and started painting and selling created items at the Centennial Villa Open house. She had always been a crafter and seamstress. She also helped with baking and Lefse-making classes. She sang and sometimes played the piano for their weekly worship services.

Gerry passed away in 2019. Dealing with his dementia was hard on Millie, but she was determined to tackle it head on and took care of him until the very end. She rebuilt her life expectations and then Covid happened. It took away her social life. Being the telephone operator she was, that was a lifeline. If you hadn’t talked to her in a couple of days, you could count on receiving a phone call, no hello just, “Did you call me?

Funeral and Interment Services are pending for May 2021.