Minnesota playing catch-up to get seniors of color vaccinated 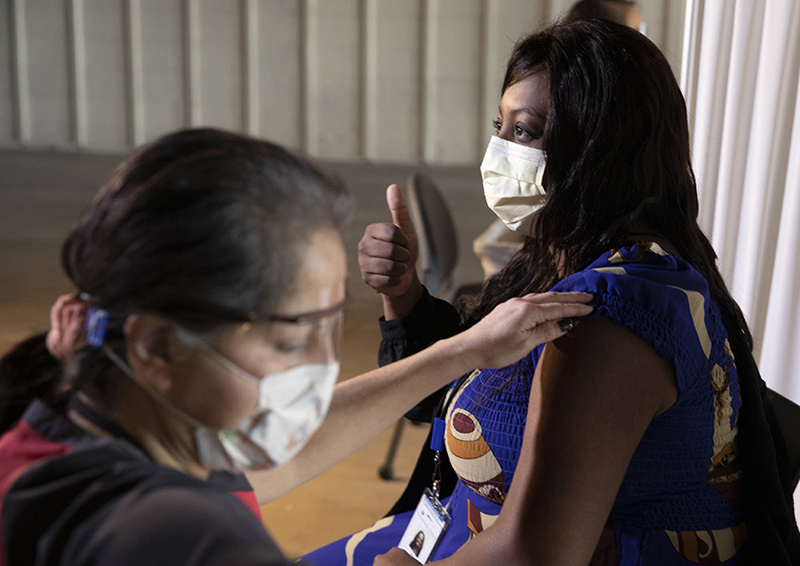 Southside Community Clinic and Sabathani Community Center in south Minneapolis joined together to vaccinate seniors at particular risk of COVID-19.

“We jumped at the opportunity, because we knew that we had the ability to reach out to seniors, and we had the facilities — and if they could bring the vaccine, we know it would be a perfect partnership,” said Tanessa Greene, Sabathani’s executive director. She said they gave the COVID-19 vaccine to 83 seniors, a majority of whom were African American.

“It’s not just about the availability of vaccine doses. It’s also about just using the existing resources in the community to be able to reach the people that most need it,” she said.

Minnesota is trying to bridge two issues at once — getting as many people vaccinated as quickly as possible, while also making sure racial and ethnic communities hardest hit by the virus have access to vaccines.

Greene said a trusting relationship helped draw people in to the vaccination clinic at the end of January. And they knew the best way to reach some was by phone, since she said many of their seniors don’t use the internet.

It’s difficult to know for sure how many people of color are being vaccinated, since Minnesota does not track vaccinations by race or ethnicity. Officials say it’s difficult to get that information legally, but they still hope to figure out a way to do it.

Demographics suggest that priorities for who got the vaccine left people of color behind. Ninety-three percent of Minnesota’s 65 and older population is white, including those who live in long-term care facilities, the largest group to receive vaccines in the initial round.

In the early weeks of vaccinations for adults 65 and older, the sign-up system seemed to favor retirees with time and help from children to navigate a relatively complicated system.

Now there’s a broader array of vaccination avenues, including a new federal retail pharmacy program. But many are still concerned any new pathway will reinforce health care inequities that have plagued the medical system for decades.

“Trust can’t be built overnight. But having said that, there is a fight to be had to make sure that those who actually want the vaccine from these communities can get it,” said Ann Nyakundi, CEO of United Family Medicine in St. Paul.

Minnesota Doctors for Health Equity sent a letter to state leaders urging them to implement better strategies to increase equity in distribution. Among the signers was Dr. Nneka Sederstrom, who is the chief health equity officer for Hennepin Healthcare.

“When we prioritize speed, what we’re doing is perpetuating inequities that already exist and not just perpetuating them, we’re actually exacerbating them, because the people who we know are affected the most by COVID, who have the worst mortality rates, and the worst outcomes are people who need the vaccine for protection first, and speed can’t get to those populations,” Sederstrom said.

Sederstrom said these factors and others should have also been taken into consideration when deciding who should be vaccinated in the first groups.

“We know that our populations of color do not have longer life expectancies. And an equitable conversation around vaccines should have included that reality. So using age as a determinant was not an equitable beginning,” she said.

“We’re combing through our data, learning what we can learn through the the pilots, and now the three ongoing state sites — who’s signing up? What’s the proportion of people who are getting access to those sites? And how can we do a better job of outreach into those communities to help people get connected to where there is a vaccine?” Malcolm said.

The state is partnering with community health clinics in some of the communities hardest hit by the virus, including the Southside Community Clinic in Minneapolis.

First, he says they reached out to all of their patients over the age of 65 to offer them the vaccine. As they’ve almost finished with that group, Noriega says they’ve opened up more broadly and they are seeing more white, Black and Asian patients than their clinic usually does.

Those kinds of events, Sederstrom said, are the key to pursuing equity in distribution.

She said Hennepin Healthcare teamed up with a church in north Minneapolis last week to vaccinate older members of the church. She says they’ll continue to do similar outreach in other communities.

“You have to go to the people, you have to be there and willing to engage them in their comfort zones, places like their churches, their community centers, in their homes in some situations, and spend the time needed in order to build that relationship,” Sederstrom said. “And then they get the vaccine.”