A celebration of Roger’s life is tentatively planned for Saturday, May 29, 2021 at Schott Funeral Homes-Mittelstadt Chapel, 902 E. Main Street in Lake Mills. Inurnment will be in Salem Memorial Cemetery, rural Lake Mills. More details will be published as Memorial Day weekend approaches. 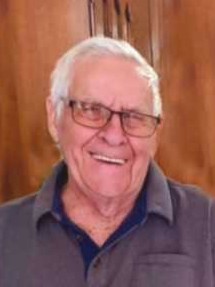 Roger Gordon Hermanson was born on September 17, 1932 in rural Lake Mills, to parents James and Olga (Kloster) Hermanson. He was baptized at Winnebago Lutheran Church and later confirmed at Salem Lutheran Church in Lake Mills. He attended country school in Winnebago County and graduated from Lake Mills High School in 1950. In high school he participated in some plays and was a member of the football team. After his graduation, he worked as a hired man for local farmers and was employed at Decker Meat Packing Plant in Mason City.

In 1952, Roger was united in marriage to Norma Slattum in Joice, Iowa. They were blessed with three children-Jim, Tom and Linda-and they made their home in rural Lake Mills. Roger farmed and shortly thereafter started his career as a real estate agent/broker. Through his career, he sold many homes, helped develop neighborhoods in Lake Mills, and moved his family in and out of a few homes as well. Leading up to his retirement he worked at Universal Circuits in Lake Mills. Roger and Norma’s marriage eventually ended with divorce and in the early 1980’s, Roger moved to Albert Lea, Minnesota.

On May 12, 1984, Roger and Betty (Metcalfe) Scherf were married in Albert Lea. They blended their families (6 children between them), and the couple called Albert Lea their home until Roger’s passing. Initially, Roger purchased and remodeled a home on Fountain Lake for he and Betty. Not only was he proud of the finished product, but the home helped to make many lasting memories for their family. The children, grandchildren and great-grandchildren would visit, fish, watch 4th of July fireworks, and spent cherished holidays at the house on the lake. After his retirement in 1995, Roger was able to spend even more time doing the things he loved: fishing, walking, flower gardening, reading and filling up his birdfeeders. He was the kind of neighbor everyone appreciated, always willing to lend a hand when needed. Even though Albert Lea has been his home for many years, Roger would make regular trips to Lake Mills to check on the farm land and to get a haircut (or shoot the breeze) with the guys at Dean’s Barbershop.

Two years ago, Roger and Betty made the move into their apartment at St. John’s, where Roger passed away peacefully with his family at his side.