Streets to reopen, memorial to stay at thesite of George Floyd arrest in Minneapolis 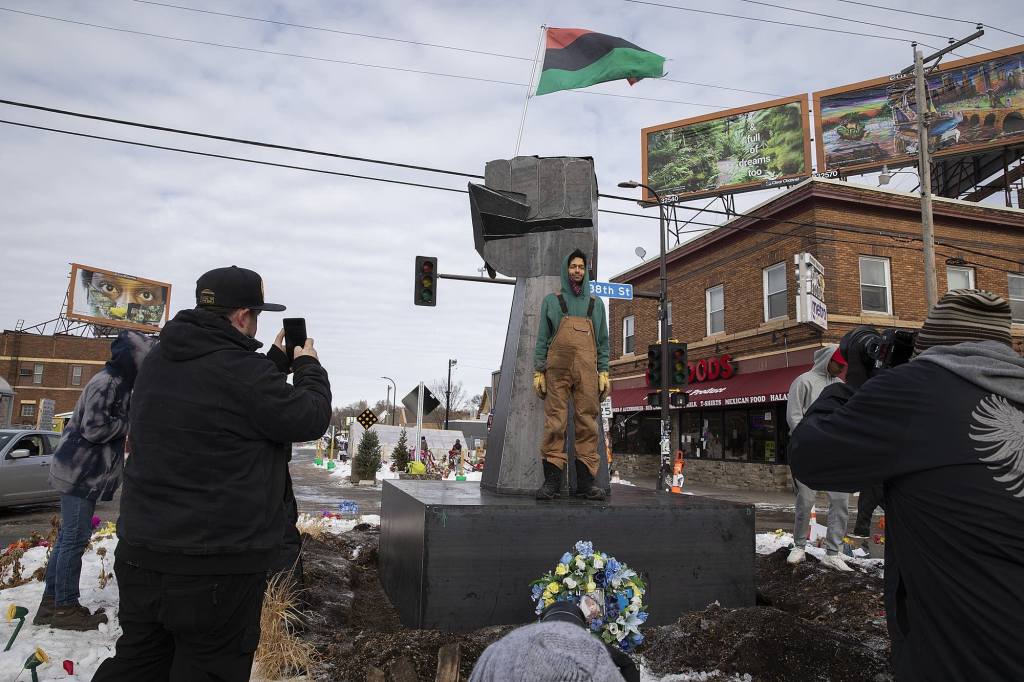 Artist Jordan Powell Karis stands in front of the steel fist sculpture that was installed in January at the intersection of 38th and Chicago in Minneapolis. Christine T. Nguyen/MPR News

MINNEAPOLIS — A memorial honoring George Floyd will remain at the Minneapolis intersection where he was pinned to the ground by a police officer in the moments before he died last May, but the streets will reopen to two-way traffic at the conclusion of the officer’s murder trial, city leaders said Friday.

The intersection of 38th Street and Chicago Avenue — now known as George Floyd Square — has been closed since late May, as the corner became a makeshift memorial to Floyd and a space for community healing. While Mayor Jacob Frey said the intersection has been forever changed, the current situation at one of the city’s busiest corridors is not sustainable.

“We will be moving forward in a substantial way to memorialize George Floyd, to memorialize his life and to make this space an ongoing space for racial justice and healing,” Frey said.

He also said the barricades that were once used to protect people and art are now used to hide illicit activity, and he stressed that the area cannot be an autonomous zone, where police are prevented from entering.

Police Chief Medaria Arradondo said neighbors are suffering, adding, “I cannot allow that to happen … Our men and women will continue to show up and respond and be the guardians of that community when they call us for help.”

Under the city’s plan, a memorial to Floyd and public art will remain at the intersection, and area residents and businesses will get a chance in the upcoming weeks to give feedback on options for a new intersection design. The intersection will see improvements, such as new lighting, and public transportation will be restored.

Frey said the city has heard from many in the community, including Floyd’s fiancee, who said she never again wants tires to run over the spot where Floyd was pinned to the ground before he died.

Floyd, a Black man who was handcuffed, died May 25 after former police officer Derek Chauvin, who is white, pressed his knee against Floyd’s neck as he said he couldn’t breathe. Floyd’s death sparked protests in Minneapolis and beyond, leading to a nationwide reckoning on race. Chauvin is charged with second-degree murder and manslaughter and is scheduled for trial March 8.

Three other former officers, charged with aiding and abetting, are scheduled to face trial in August.

Frey said he recognizes Chauvin’s trial will be a difficult time, and the intersection will be an important gathering place. He said the city will increase services to the intersection during the trial and will reopen it to traffic after the trial concludes.

“It is our responsibility as leaders and as a community to both honor George Floyd and the hallowed ground where he died, and also respectfully restore 38th & Chicago to a vibrant and functioning neighborhood,” Frey said.