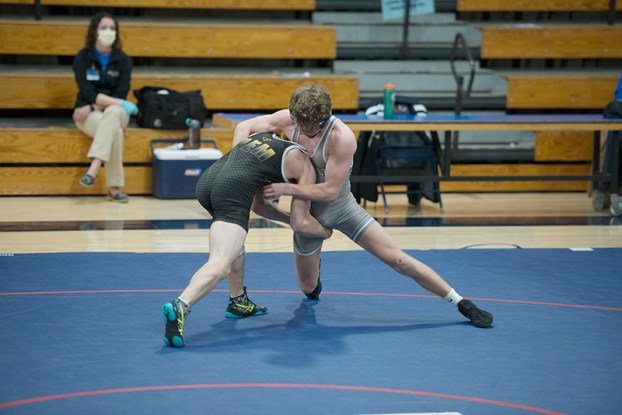 After making a habit of splitting duals at triangulars this season, the Albert Lea wrestling team broke that model in a big way Thursday night hosting Plainview-Elgin-Millville and Austin.

The Tigers cruised to an easy win over the Bulldogs, 44-27, before completely dismantling the Packers in a shutout, 84-0.

In the dual against P-E-M, Albert Lea got out to a 30-0 lead before the Bulldogs pulled out their first victory.

Eighth graders Logan Davis and Nick Korman won in back-to-back pinfalls at 106 and 113 pounds, Davis in the second period and Korman in the first.

Eighth grader Brody Ignaszewski and senior Joey Flores then won both of their matches by forfeit at 120 and 126 pounds, respectively.

Junior Carter Miller picked up a win in what would be the quickest match of the night, winning by fall in 13 seconds at 132 pounds.

Albert Lea dropped three matches in a row at 145, 152 and 160 pounds. Eighth grader Triton Cox lost by pinfall at 145, junior Henry Eggum lost in a 5-0 decision at 152, and sophomore Luke Moller lost in a 5-4 decision that came down the very last seconds.

With the Bulldogs gaining a little bit of momentum, senior Caleb Talamantes came out and shut down any hopes the Bulldogs had by winning in a 22-7 tech fall and securing the victory for the Tigers with four matches remaining.

Sophomore Kadin Indrelie added to the lead with a fall in the closing moments of his match at 182 pounds, giving the Tigers a 44-12 lead.

Senior Trevor Ball fell to a fall at 195 pounds. Junior Adam Semple lost in a 6-1 decision at 220 pounds, and sophomore Jackson Forman lost to a pinfall at 285 pounds.

In the second dual, the already depleted roster of the Packers stood little chance against the Tigers.

The Tigers climb to 12-10 in duals this season. They are back on the mat Saturday morning when they host a triangular against Mankato East and Rochester Century.

MINNEAPOLIS — Boo Buie scored 19 of his 25 points in the second half, sparking Northwestern to rally past Minnesota... read more