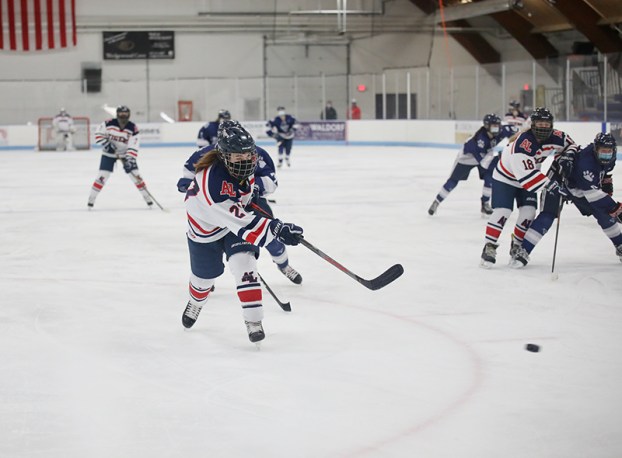 Albert Lea senior Ally Rasmussen scores the first goal of the night for the Tigers. Rasmussen went on to score another goal in the second period, leading the Tigers to a 5-2 victory. Kelly Hendrickson/For the Albert Lea Tribune

After going back and forth with Rochester Century through the first and second period, the Albert Lea girls’ hockey team pulled away with three late goals to win the game, 5-2.

It took little time for the Tigers to find their first goal of the game. Senior Ally Rasmussen scored the goal midway through the period with eighth grader Shelby Evans and junior Esther Yoon in on the assists.

The Panthers answered back roughly five minutes later to tie the game at 1-1.

With less than a minute to go in the first period, senior Alli Dulitz scored for the Tigers, assisted by fellow senior Taylor Stanek.

The Tigers went into the break with a 2-1 lead and a 16-11 shots-on-goal advantage. Senior Maddie Schneider was in goal for Albert Lea, making 10 saves.

Century came out in the second half and tied the game once again just under four minutes into play. The Tigers came right back less than one minute later as Rasmussen scored an unassisted goal, her second of the night.

Ten minutes later, still in the second half, eighth grader Mika Cichosz scored for the Tigers, giving them a two-goal advantage with the unassisted goal.

The Tigers again outshot the Panthers in the second period, 17-10. Schneider saved nine shots in the period.

The Tigers defense held strong in the third period, not allowing the Panthers to come close to a comeback.

Evans scored a goal of her own with less than a minute to go in the game to secure the victory for the Tigers. The goal was assisted by Yoon, her second of the night.

The Raiders outshot the Tigers in the final period, 15-6; however, Schneider saved all of them. Overall the Tigers led in shots-on-goal, 39-36.

The Tigers are now winners of six straight games after losing their opening night matchup.

They will be back on the ice Thursday when they travel to Northfield to take on the 6-0 Raiders in a battle at the top of the Big Nine Conference. Their next home game is slated for Feb. 27 against the Packers of Austin.