Tigers fall in back-and-forth game against Panthers over weekend 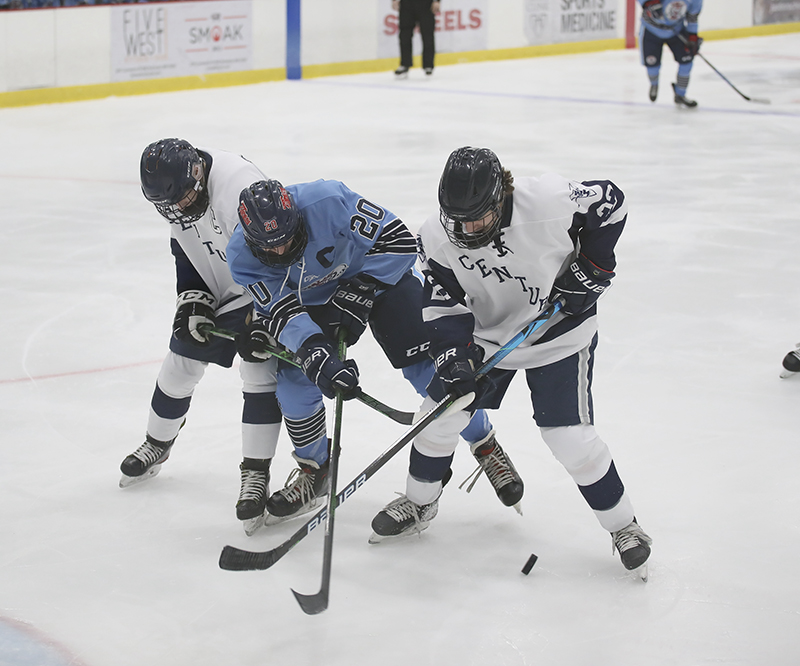 Albert Lea senior Logan Barr battles with some Century defenders Saturday. Barr would go on to score one goal and record one assist in the Tigers 5-3 loss. Kelly Hendrickson/For the Albert Lea Tribune

The Albert Lea boys hockey team traveled to Rochester Saturday in hopes of righting the ship after a tough loss a few days prior to Dodge County.

The Tigers had a lead multiple times against the Panthers, but a scoreless third period put the Tigers in a hole they were never able to climb out of, falling 5-3.

Albert Lea senior Blake Ulve got the Tigers on the board with a goal just over six minutes into the game assisted by senior Logan Barr. Just over a minute later, the Panthers evened the score with a goal in the eighth minute.

Ulve scored his second goal of the period with one minute before the buzzer, putting the Tigers on top once again. The goal was assisted by sophomore Joseph Yoon.

Sophomore Dakota Jahnke was in the net for the Tigers and saved seven shots on goal in the first period. 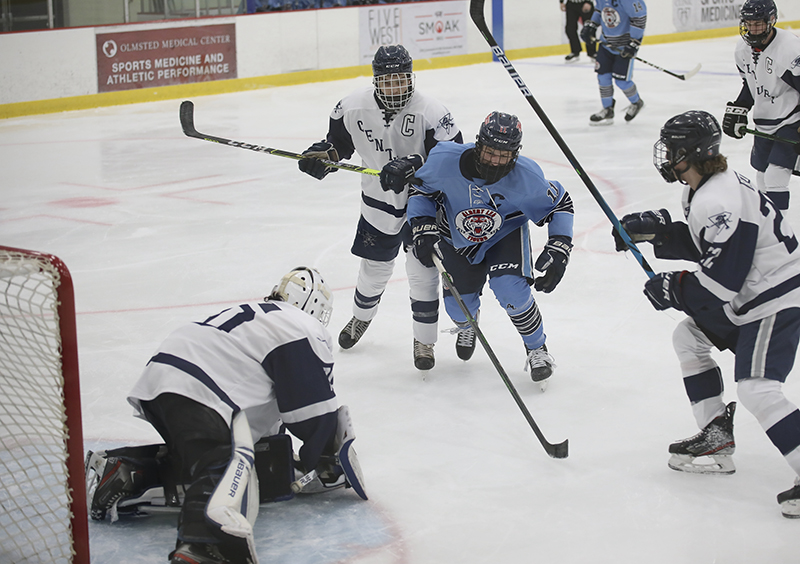 Senior Blake Ulve scored two goals for the Tigers in the loss to the Panthers. The Tigers fall to 4-5 on the season. Kelly Hendrickson/For the Albert Lea Tribune

With the Tigers clinging to a 2-1 lead heading into the second period, it didn’t take long for the Panthers to knot the game back up, scoring an unassisted goal in the seventh minute.

Century took the lead for the first time in the game six minutes of gameplay later, leaving the Tigers trailing 3-2 with four minute to go in the period. Barr made sure Albert Lea didn’t go to the break trailing by scoring on a power-play goal assisted by Yoon and sophomore Tim Chalmers. Jahnke saved 11 shots in the period as the teams went to the locker rooms tied 3-3.

The Panthers came out in the third period and took the lead five minutes into play. The Tigers got off 11 shots in the period, but none of them were able to find the mark. The Panthers all but ended the game by taking a two-goal lead in the 15th minute. Jahnke, who saved a total of 29 shots in the game, was pulled to give the Tigers an offensive numbers advantage, but it proved to be not enough, handing Albert Lea its third-consecutive loss.

The Tigers fall to 4-5 on the season and will be back on the ice Saturday when they hit the road to take one the 4-4 Falcons of Faribault. The Tigers beat the Falcons 3-1 in their previous matchup this season.