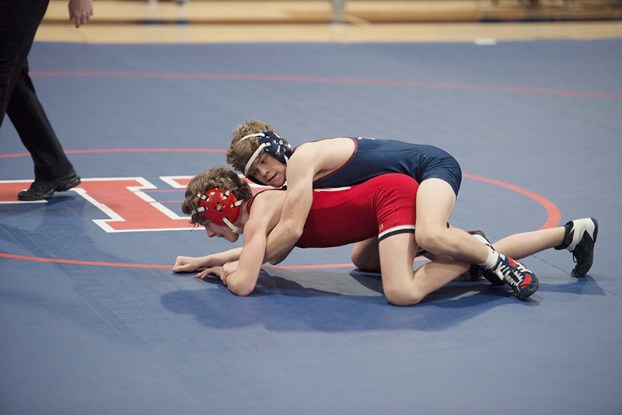 Eighth grader Logan Davis rides his Mankato West opponent in the first period of his match at 113 pounds. Davis won the match a few moments later with a pinfall. - Tyler Julson/Albert Lea Tribune

The Tigers came out on top of both duals, dominating the Scarlets and only losing two matches 47-22. They took on a depleted Rockets team in the second dual and won two of the three contested matches, winning 77-6.

The Tigers started their dual with the Scarlets by rattling off eight straight wins.

Freshman Michael Olson started with a forfeit win at 106 pounds and was followed by eighth grader Logan Davis, who picked up a pinfall in the first period of his match at 113 pounds. Fellow eighth grader Brody Ignaszewski won by forfeit at 120 pounds.

Sophomore Aivin Wasmoen got a hard-fought win at 126 pounds by beating his opponent in a 6-4 decision. Despite the close score, Wasmoen never trailed in the match.

Junior Carter Miller kept the winning streak alive with a 11-4 decision win at 132 pounds, and  junior Cam Davis followed with a dominating performance at 168 pounds, beating his opponent in a 17-2 technical fall in under three minutes. 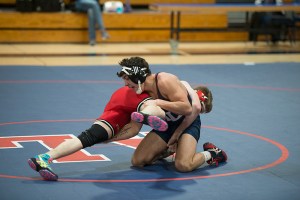 Senior Tucker Ericksmoen put on an impressive display at 145 pounds, beating his Mankato West opponent in an 11-4 decision.

Midway through the dual, the Tigers led 32-0, and were in no danger of giving up the lead. Eighth grader Triton Cox sured up the dual victory at 152 pounds by defeating his opponent in a pinfall recorded in the second period.

Junior Henry Eggum came up short in his match at 160 pounds, losing in a 18-7 decision. Sophomore Luke Moller tried to get the Tigers back to their winning ways, but was caught in a tough spot in his 170-pounds match and fell victim to a pinfall midway through the first period.

Senior and No. 8-ranked 160-pounder Caleb Talamantes got Albert Lea back with an easy first period pinfall to set the Tigers on top 44-10.

Sophomore Kadin Indrelie also won in his match at 195 pounds, allowing only one point in the match, and winning 8-1.

The Tigers dropped the final two matches of the dual with juniors Adam Semple and Caleb Banks falling to first period falls.

Cameron Davis, Semple and Banks were the only three Tigers to wrestle a contested match at the dual.

Cameron Davis made easy work of his opponent at 138 pounds, winning his second technical fall of the night 22-7.

Semple found retribution after being pinned in his first match of the night by picking up a pinfall of his own.

Banks lost his match at 285 pounds, falling victim to a pinfall in the first period.

The Tigers move to 4-6 on the season and will be back in action Thursday at Rochester Mayo.

Tigers blow out Packers on the road, move to 5-1 on the season