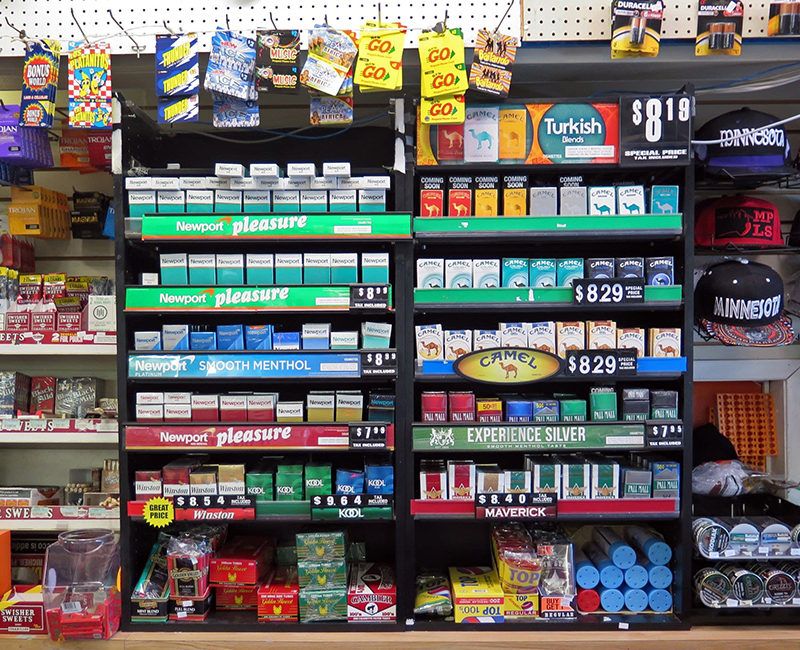 Some of the many menthol tobacco products sold at the Penwood Market convenience store in Minneapolis in 2017. — Mark Zdechlik/MPR News

In his proposed budget, Gov. Tim Walz increases the tax on cigarettes and puts a new tax on vaping devices.

“We use the tax code to either incentivize or dis-incentivize behaviors,” Walz said. “That’s nothing surprising. And we’re trying to do that. I would also say that a bulk of that cigarette tax goes to cessation programs and education programs, and that’s a proactive way to reduce that down.”

Before COVID-19 became the top health issue last year, Walz was working hard to fight the growing rate of vaping among Minnesota kids. In 2019, he described the increase in vaping among students as an epidemic.

Republicans oppose the tobacco tax increase, as well as the income tax increases Walz is proposing on top earners and businesses.

Rep. Greg Davids, R-Preston, is among those pointing out the regressive nature of a higher cigarette tax.

“It’s a tax that the poor have to pay for, and I don’t think that’s where we want to go,” Davids said. “First of all to talk about tax increases in the middle of a pandemic is shameful, just at the outset.”

Republican leaders in the Minnesota Senate say they won’t support any tax increases this year.

The coalition known as Minnesotans for a Smoke-Free Generation is also calling for more state spending on prevention and treatment efforts. Officials with the coalition say the state spent only about 1 percent of the $760 million in tobacco revenue it collected last year on prevention.

Rep. Heather Edelson, DFL-Edina, who supports the governor’s plan, said the 2013 increase had a big impact on getting Minnesotans to stop smoking. The revenue generated by another tax increase could fund more prevention efforts, Edelson said.

“I know people will say it’s regressive. But I would say what is regressive is the death and disease that is caused by tobacco and nicotine use,” Edelson said. “Marginalized populations are targeted by big tobacco, and it’s our job as a state to try to get ahead of that.”