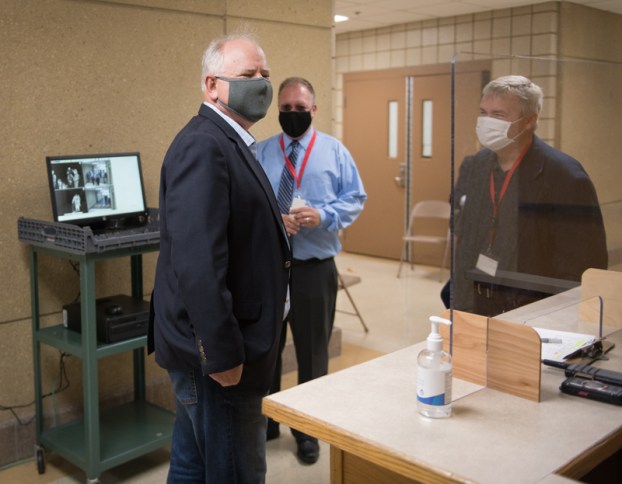 Lower grades at many Minnesota elementary schools are already open with safety precautions in place. Now, all middle and high school students can return to their schools for hybrid or in-person learning starting Monday, if schools are ready and follow required safety protocols such as masking and social distancing.

Walz said in a televised speech that he expects all schools to offer some form of in-person learning by March 8 — less than three weeks away.

Owatonna High School soccer player Lane Versteeg said he had all but given up on a normal senior year after being forced to study from home since last March. He said he’s now eager to experience what’s left — and most importantly to do it together with his classmates.

“Nothing can replace the memories made with friends during high school. I was longing for just one more bus ride with my teammates, just one more rush of anticipation before stepping on to a concrete stage (for graduation). And hoping for not just a senior prom, but a first prom,” Versteeg said at the governor’s presentation. “Now, as vaccines roll out, and the end of this pandemic feels closer than ever before, I am reminded of the excitement I was experiencing 12 months ago.”

Walz is leaving many key decisions on how to reopen safely up to school districts, and is not mandating that they reopen. Districts could opt for in-person classes five days a week, or fewer. Officials must keep a close eye on how the virus is spreading locally, but there’s no hard-and-fast rule to trigger renewed shutdowns. Families concerned about the risks could still choose distance learning.

The governor said more than 25% of Minnesota teachers have now had their first vaccine shots, while 18,000 doses earmarked for them will go out next week. The state launched an aggressive testing program for educators last month, and data from it shows that the transmission rate among teachers is just 0.37%. He predicted that the bulk of them will be vaccinated by March 8. And he said testing for students is being expanded.

“Like across the state, our teachers, our principals, our education staff need to be resilient and courageous and flexible as we work together to get kids back in school,” said Matt Grose, superintendent of the Grand Rapids-Bigfork school district. He urged communities and parents to be patient as their districts fine-tune their plans.

Republicans called on Walz to let schools reopen immediately and make their own decisions. Senate Majority Leader Paul Gazelka, of East Gull Lake, said his chamber will still vote Thursday on rescinding the Democratic governor’s emergency authority to close schools. The Democratic-controlled House has blocked all GOP efforts to roll back those powers.

“All the science says we can and should open schools for the academic and emotional health of our children,” Gazelka said in a statement.

The Minnesota Department of Health on Wednesday reported 10 more deaths and 783 new cases, to raise the state’s totals to 6,390 deaths and 475,379 cases. Minnesota health care providers had administered 943,251 vaccine doses as of Monday. The department said 12.5% of the state’s population has now had at least one dose, or 659,629 people, including 4.4% who have complete the full two-dose series, or 246,431 people.

The announcement drew a muted response from the teachers’ union Education Minnesota. Denise Specht, its president, said many districts will struggle to meet the standards for safe operation outlined in new guidance from the U.S. Centers for Disease Control and Prevention without additional resources and staff.

“There will still be educators who need the vaccine before they can safely return to their buildings because of local conditions.” Specht said in a statement. “There will also be families that won’t be comfortable returning to in-person learning next month. Meeting the needs of everyone won’t be easy and the solutions will look different everywhere.”