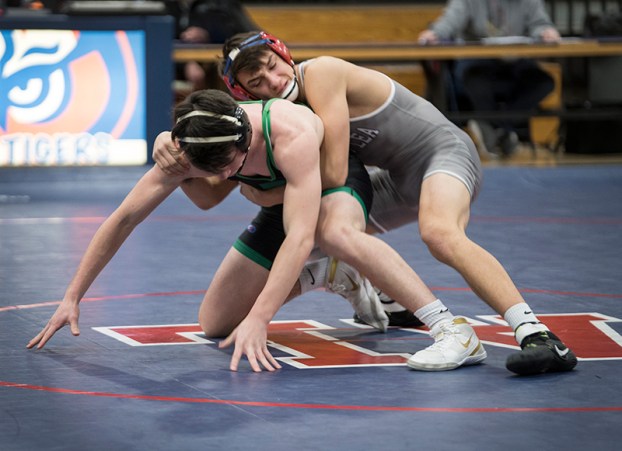 Caleb Talamantes advanced to the state tournament Saturday with a runner-up finish at 170 pounds in the section meet. - Tribune File Photo

Six Albert Lea wrestlers entered the Section 1AAA-2AAA state prelim tournament Saturday in Farmington with the chance to advance to the state tournament next week.

By the end of the day two of them punched their ticket to compete for a state championship in their respective weight classes.

Eighth graders Nick Korman and Logan Davis, sophomore Aivin Wasmoen, junior Cameron Davis, and seniors Joey Flores and Caleb Talamantes started the day in the eight-man brackets consisting of the top four wrestlers from both Section 1AAA and Section 2AAA. Each wrestler needed to place in the top two to advance to the state tournament.

Cameron Davis was the highest finishing Tiger, rolling his way through the championship at 138 pounds. Davis recorded a 13-0 major decision in his quarterfinal matchup, before winning in the semifinals 10-5. Despite a close match in the finals, Davis never trailed in the contest, eventually winning 5-3. The win advances Davis to the state tournament.

Talamantes also dominated through the first two rounds of the day, starting off with a second-period fall in the quarterfinals, followed by a 6-1 decision win in the semis. Talamantes met a tough opponent in the finals, falling in a 9-2 decision. However, due to defeating the third-place finisher in the semifinals, Talamantes automatically qualified for the state tournament.

Wasmoen started the tournament with a 4-3 decision win at 113 pounds. In the semifinals, Wasmoen was defeated in a second-period fall by the eventual section champion. Wasmoen battled his way back up through the consolation bracket, however, winning a 6-0 decision, followed by a 4-2 decision to earn a wrestleback opportunity. Unfortunately for Wasmoen, he would come up short in his wrestleback, ending his season with a third place finish as sections and an overall record of 15-11.

Korman took fourth place at 106 pounds. The eighth grader won his first match via an 8-3 decision, but fell victim to a 14-4 major decision to the eventual section champion in the semifinals. Relegated to the consolation bracket, Korman won his first match with a 7-5 decision. In the consolation finals, he came up just short, falling in a 3-1 sudden victory. Korman ends his season with a fourth place finish in the super-section meet and an overall record of 20-7.

Logan Davis started his day with a second-period pinfall loss to the eventual section champion at 120 pounds. Once in the consolation bracket, Davis suffered a 8-1 decision loss ending his season. Logan Davis finishes his season with a 16-6 record.

Flores also lost his opening round match at 126 pounds in a second-period pinfall. In the consolation bracket, he fell in a 14-0 major decision, ending his season with a record of 12-7.

Cameron Davis and Talamantes will begin their state tournament journeys starting Thursday. Exact times are yet to be determined.