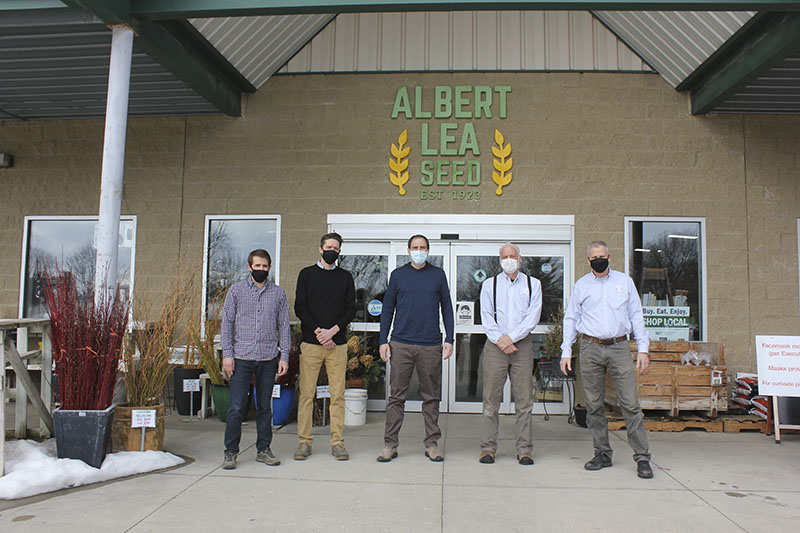 Albert Lea Seed, a farm seed and garden center in Albert Lea, has established a stock-ownership structure to transition business ownership to its employees.

Since its foundation by Louis Ehrhardt in 1923, the company has been owned and operated by the Ehrhardts for three generations. Current co-owners Mac, Tom and Margaret Ehrhardt took over operational control in 2000. Since then, Albert Lea Seed has grown to 40 full-time employees who serve more than 6,000 customers every year.

“We wanted to maintain the integrity of Albert Lea Seed as an independent and local business and to offer the best outcomes — both for the employees who have helped us build this business, and for our customers,” Mac Ehrhardt said in a press release. “That means we have decided to sell in.”

The company announced the sale of minority stock ownership to three current employees and one former employee. Matt Helgeson, Ben Hinueber, Elia Romano and Robert Atwell have taken ownership of a minority of shares. Their shares provide two seats on the company’s board of directors.

The Ehrhardts will continue to be the majority shareholders for several years, but majority stock ownership will be turned over to employees thereafter.

“Our employees, our customers and our community are best served by having our business owned by the people who run it and who live in the communities we serve,” Mac Ehrhardt added. “The success and growth of Albert Lea Seed is due to the hard work and dedication of people who have worked here in the past, and our current employees. I firmly believe that this transition offers the best opportunity to maintain our business momentum and to reward the people who have built it.”

Albert Lea Seed is a leading supplier of organic and conventional, non-GMO farm seed across the Midwest. The company provides farmers with seed for corn, soybeans, cover crops, small grains, forages and conservation planting. It is the home of Viking Corn and Soybeans.