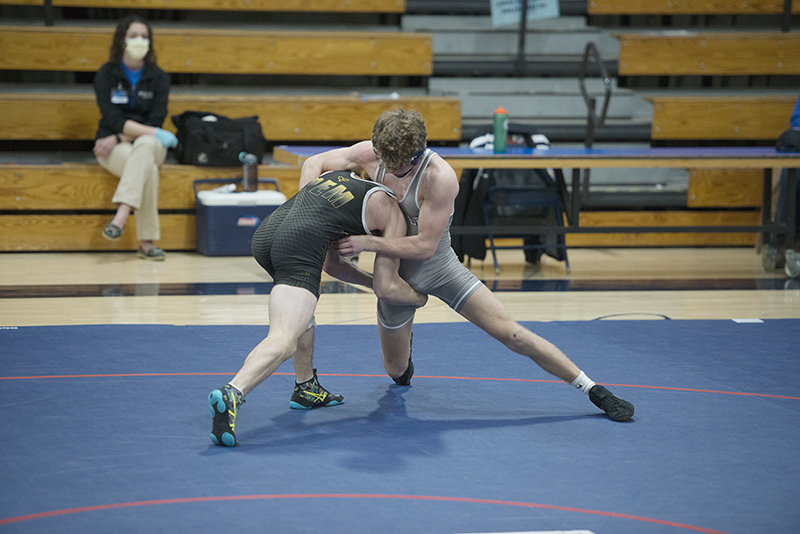 The Albert Lea wrestling team went into the first round of the team sections tournament Wednesday night as the No. 6 seed and emerged as one of the two teams that will wrestle for the Section 1A championship Saturday.

The Tigers put together two of their best dual performances of the season to pull off not just one, but two back-to-back upsets.

Albert Lea first took on No. 3-seeded Faribault, and thanks to some big time bonus-point victories, the Tigers won the dual 40-25.

Eighth grader Nick Korman opened the dual with a 6-5 decision victory over No. 9-ranked 106-pounder Bo Bokman. Fellow eighth grader Logan Davis continued the wins over ranked opponents by defeating the No. 10-ranked 113-pounder JT Housen in a third-period pinfall.

Sophomore Aivin Wasmoen also picked up a pinfall victory at 120 pounds to give the Tigers a 15-0 lead through the opening three matches.

Senior Joey Flores dropped a tough 9-2 decision at 126 pounds and was followed by eighth grader Brody Ignaszewski, who lost in an 11-2 major decision at 132 pounds.

Albert Lea got back on the right track after junior Carter Miller picked up a pinfall victory at 138 pounds and No. 2-ranked 138-pounder Cameron Davis won in a 22-6 technical fall.

Leading 26-7, the Tigers then dropped their next two matches. Eighth grader Triton Cos dropped a 8-2 decision and was followed by junior Henry Eggum, who lost by pinfall in the second period of his match at 160 pounds.

Now leading by 10 points with five matches to go, Albert Lea got two big wins from sophomore Luke Moller and senior Caleb Talamantes at 170 and 182 pounds, respectively. Moller won in a 10-1 major decision, and Talamantes secured the dual win with a forfeit win.

The Tigers led by 20 points with just three matches left, making it mathematically impossible for them to lose. Sophomore Kadin Indrelie lost in a narrow 7-5 decision at 195 pounds, senior Trevor Ball lost in a first period pinfall, and junior Adam Semple won in a 10-2 major decision at 285 pounds.

“Faribault is currently ranked seventh in the latest ratings by the Guillotine,” said head coach Paul Durbahn. “I’m very proud of our boys tonight. Great team wins. Every point and every match matters, and they really embraced that and we had some of our young talented wrestlers showcased tonight.”

The win advanced the Tigers to the next round where they battled with the No. 2-seeded Owatonna, coming out on top 38-33.

Korman again opened the dual with a victory for the Tigers, winning by fall in the first period. Logan Davis then won in a 16-1 technical fall, before Wasmoen was defeated in a 15-0 technical fall.

Ignaszewski lost a 7-2 decision, but was followed by a four-match streak by the Tigers, three of which were forfeits. Joey Flores picked up a pinfall win at 132 pounds, and Cameron Davis, Cox and junior Mason Drescher were all awarded forfeit victories.

Owatonna took two matches back when Eggum was defeated by pinfall and Moller lost in a 11-3 major decision.

Talamantes was once again the match that secured the team win for the Tigers as he won his match at 182 pounds in a 15-9 decision.

Indrelie lost a 7-2 decision, while Ball and sophomore Jackson Forman were defeated by pinfalls.

The Tigers advance to the Section 1AAA championship where they will take on the No. 1-seeded Raiders of Northfield. Action is set to begin at 10 a.m. Saturday in Northfield. The winner moves on to the state prelims where they will meet the champion of Section 2AAA. That dual will happen immediately following the section championships.