Building was ‘love at first sight’ 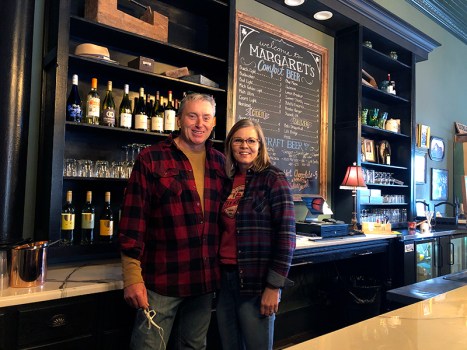 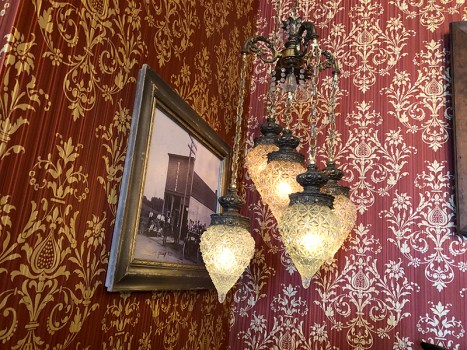 Artwork for Margaret’s Pub was donated by local residents. A corner with an old photo and long-hanging chandelier are shown on Saturday, Jan. 30, at Margaret’s Pub in Easton. David Mayberry/Albert Lea Tribune 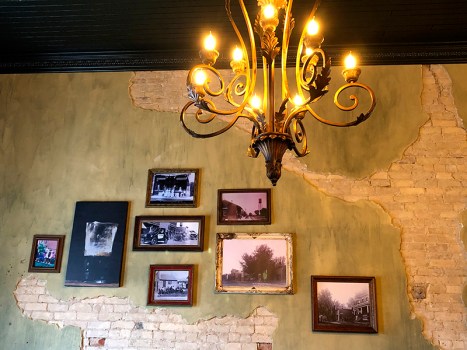 Artwork for Margaret’s Pub was donated by local residents. The renovation purposefully exposed parts of the walls to show the aged brick, and the Allis couple also refinished — rather than replaced — the hardwood floor. on Saturday, Jan. 30, at Margaret’s Pub in Easton. David Mayberry/Albert Lea Tribune 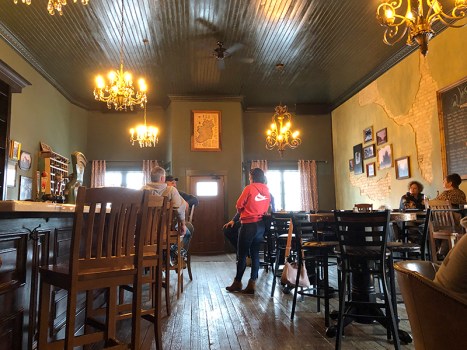 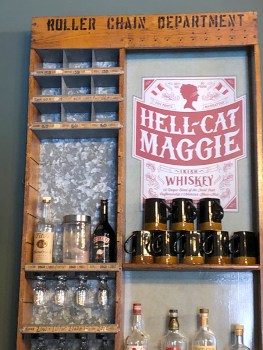 Before Margaret’s, there was a mercantile store. Owners Eric and Ronda Allis saved the display holding chain from the store and turned it into a whiskey display for their bar. The ‘Roller Chain Department’ is shown on Saturday, Jan. 30, at Margaret’s Pub in Easton. David Mayberry/Albert Lea Tribune 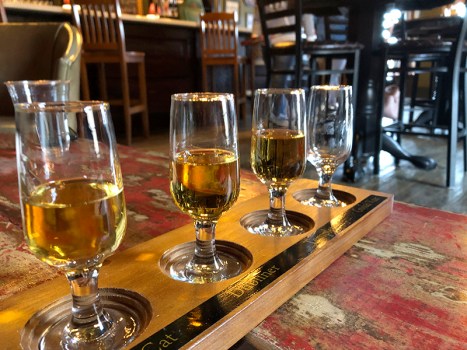 A flight of whiskey (including one bourbon) is shown on Saturday, Jan. 30, at Margaret’s Pub in Easton. David Mayberry/Albert Lea Tribune 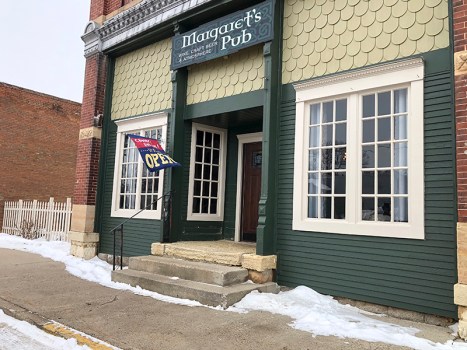 The building that houses Margaret’s Pub was built in 1892. The current facade is shown on Saturday, Jan. 30, in Easton. David Mayberry/Albert Lea Tribune

EASTON — As the pandemic winds down, the mood at Margaret’s Pub will improve.

The colors on the walls and the antique lighting that greets visitors is already warm, but owners Eric and Ronda Allis hope the aesthetic establishes the new bar as a staple in Easton.

“We’d never worked or owned a bar before,” Eric Allis said on a late January Saturday afternoon. “But we like to entertain people, so we decided to look for a place that has a mood.”

With tradition worn into its floors and hanging in various states of originality on the walls, Margaret’s has a swagger.

The menu — both food and drink — is purposefully limited. The decor was largely donated by the community. And the proprietors are expert at fields outside the doors.

Advertising? Only their Facebook page and word of mouth, so far.

The name comes from Eric Allis’ beloved great-aunt and godmother.

In its previous life, Margaret’s was a hardware store, and before that a mercantile. It was constructed in 1892.

“We don’t want it to be a museum, but it needed some history,” he said.

A photo of Margaret Zelezny hangs on a bar shelf, next to other mementos donated by community members. Some are specific to Easton; others speak more to the area’s Irish heritage.

A mirror lining the hallway near the bathrooms is the hand-painted original from the wall of the old Savoy Hotel.

“I geek out on history, so it was sexy to bring that stuff back,” he said.

When not at Margaret’s, Eric Allis operates a custom sign business out of their home. Ronda Allis is a planning director for the Minnesota Department of Transportation; she was also formerly the city administrator for Wells.

The couple has three adult daughters, and has lived a mile outside Easton for 24 years. The soon-to-be bar, despite needing some care, quickly joined the family.

“The minute he walked in, it was love at first sight,” Ronda Allis said of that first meeting.

“It was a mess,” her husband said.

The couple finalized the purchase in May 2019, cleared everything out of it — stacks of boxes, commercial shelving and plenty of dust — by July.

They saved the rollerchain display from the hardware store. It’s now home to the whiskey/bourbon flight stand.

The couple added a patio — which they anticipate will be the focal point during the summer months — by August, worked on the front and hustled enough inside — including restoring the senior floor — to be open for St. Patrick’s Day 2020.

And then Covid shut down the state the following day.

Margaret’s Pub hosted a few car roll-ins over the summer: “I just wanted to do something fun for the community and have a good time doing it,” Eric Allis said.

And they worked with the city to close off the block outside for their reopening on June 1. Margaret’s also hosted a costume party on Halloween.

“They’ve been super helpful with permits. It restores our faith in people,” he said. “They’re pro-business, making sure we have what we need to grow.”

Margaret’s is open three days a week, which is perfect in a town of fewer than 200.

“It’s kept us pretty busy,” he said. “We knew we needed to be able to work it ourselves.”

Two food trucks alternate Thursdays and Fridays in front of the business. The couple offers pork sliders, pork nachos and pizzas on Saturdays.

The beverage options are almost equally as limited but unique.

Flights of whiskey/bourbon, wine or beer are the best deal. There’s also a Bloody Mary and a Bailey’s Hot Chocolate. They rotate beer taps weekly.

“We’re not mixologists,” Eric Allis said. “We keep it simple but fun.”

They’ll host more events as restrictions ease, and maybe hire some help so they can enjoy some of the fun.

“We wanted a place that people wanted to make a trip to see,” he said, “and feel comfortable enough to come back.”