Bulldogs fall in first round of state tournament 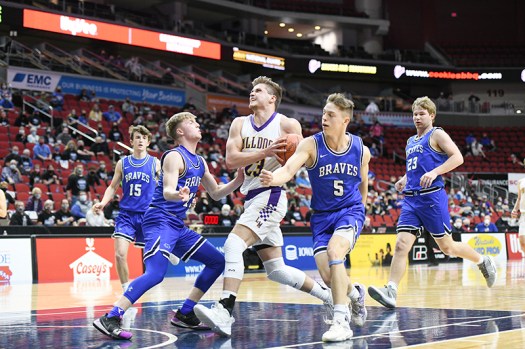 Lake Mills senior Caleb Bacon powers to the basket Monday afternoon in the first round of the Class 1A state basketball tournament. Bacon had 17 points in the loss to Montezuma. Lory Groe/For the Albert Lea Tribune 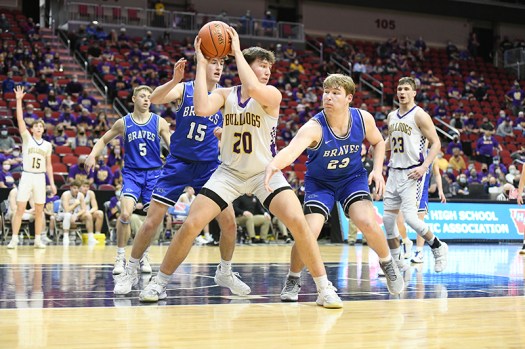 Junior Wyatt Helming catches a pass in the paint Monday against Montezuma. Helming totaled 16 points and 12 rebounds for the Bulldogs. Lory Groe/For the Albert Lea Tribune 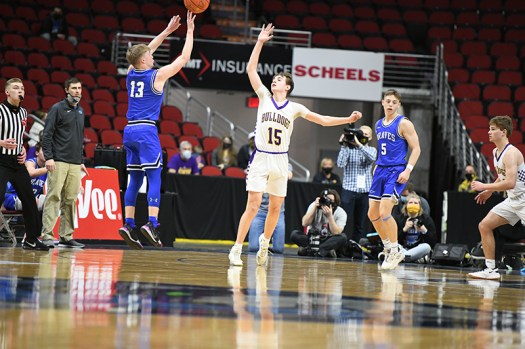 Lake Mills senior Ryan Huston led the Bulldogs with 19 points, 15 of which came from beyond the three-point line. Lory Groe/For the Albert Lea Tribune 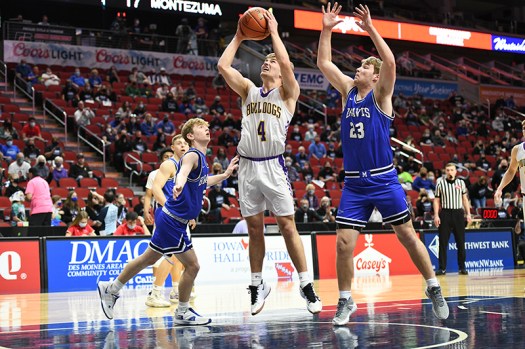 Junior Bennett Berger pulls down a rebound in the opening round matchup against Montezuma. Lory Groe/For the Albert Lea Tribune 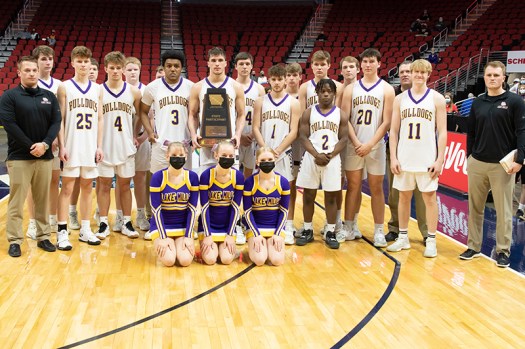 Lake Mills ends its season with a 25-1 record and a first round apprearance in the state basketball tournament. Lory Groe/For the Albert Lea Tribune

For the second-consecutive season, the Lake Mills boys’ basketball team had their state tournament run cut short in the first round of play.

Seeded No. 2 in the eight-team field, the Bulldogs (25-0) took on No. 7 seed Montezuma (22-2) seeking redemption for their early exit one year ago.

Montezuma took a lead early in the first quarter by getting hot from beyond the three-point line, shooting 5-8 in the quarter. The Bulldogs made two three-pointers in the quarter and seven total field goals. Senior Caleb Bacon led scoring in the quarter with seven points. The Braves led 25-19 after the first.

The momentum flipped in the second quarter as the Bulldogs shot 56.3% from the field while the Braves shot just 46.2%. Lake Mills even pulled out to a six-point lead at one point in the second, but Montezuma scrambled back to tie the game just before halftime.

Bacon and senior Ryan Huston were leading the Bulldogs at the half with 11 points each, as the game was tied 40-40.

The Braves scored 11 in the third quarter, while the Bulldogs were right behind with nine. Huston hit a big three near the end of the quarter to tie the game at 49-49.

Lake Mills trailed for more than half of the fourth quarter until Huston hit another three pointer to give the Bulldogs their first lead since late in the third. After building a three-point lead, the Bulldogs gave up a momentum shifting three that tied the game 58-58.

The score remained there until the end of regulation. The Bulldogs had a chance to win the game at the end, but the buzzer beater by junior Wyatt Helming came up just short.

Montezuma opened the overtime period on a 6-1 run, getting the clock to under a minute before Lake Mills scored its first field goal in overtime. Bacon hit a shot below the basket to narrow the lead to three, but it would not be enough, leaving the Bulldogs just short for the second year in a row.

Huston led the Bulldogs with 19 points, Bacon had 17 and Helming had 16 points.

The first-round exit is the first loss for the Bulldogs this season, who finish with a record of 25-1. They will lose four seniors from this year’s team including Bacon, Huston, Antwon Jackson and Dashawn Linnen.