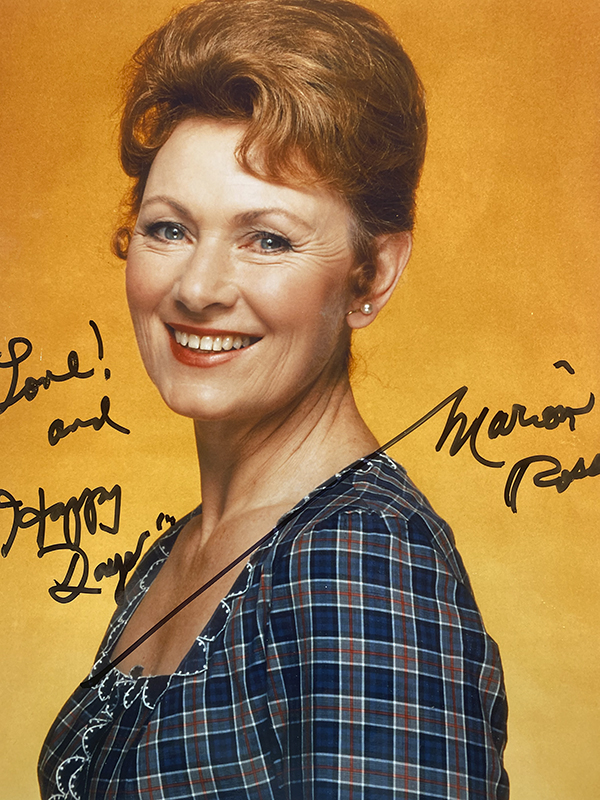 In spite of slowdowns related to the COVID-19 pandemic, the committee raising money for a bronze statue of Marion Ross dressed as Mrs. Cunningham from “Happy Days” is progressing with an unveiling scheduled for July 2.

The bronze statue has been created by sculptor Chad Fisher from Dillsburg, Pennsylvania, and will be installed on the corner of Broadway and Water Street, according to a press release.

Ross as her character will be seated on a park bench with an outstretched hand inviting visitors to take a seat beside her for a photo op. Friends can gather around her for group shots also.

Ross grew up in Albert Lea and calls Albert Lea her hometown. She has many times come back to visit her sister, Alicia, while she was alive, and has done fundraising for the Freeborn County Historical Museum with the donation of her blue garden truck from her “Happy Days Farm,” which raised $20,000.

She has also taken the Albert Lea Community Theatre under her wing, which performs at the theater that bears her name, the Marion Ross Performing Arts Center. The release stated both have benefited greatly through the years with her performances as she has given thousands of dollars back to her old community in support of the arts.

She helped to decide the location of the statue, which will be at an angle looking from the theater corner out across the lake to the beach, where she was a lifeguard. She also thought that her old house on High Street is just over the hill from the beach, so she would be forever looking at important images from her past that would make it the perfect spot.

Recently, Ross was honored by her alma mater San Diego State University in a tribute to women alum who have influenced people’s lives.

The San Diego Union Tribune in a Sept. 27, 2020, article said: “Long before she became part of our TV lives as the cheery Mrs. Cunningham in ‘Happy Days,’ Marion Ross was a San Diego State student playing an English maid in a play at the Old Globe Theatre. Her friendship with Old Globe founding director Craig Noel led to a role at the Pasadena Playhouse, which led to a contract with Paramount Pictures and a TV career that began in the late 1950s and has included stints on ‘Life with Father,’ ‘Mannix,’ and much later, ‘Gilmore Girls,’ and ‘ SpongeBob Square Pants.’ Her role as the unflappable “Mrs. C” made her forever famous…”

She was named an Old Globe artistic associate in 1982 and returned to the Globe for a 2000 production of the comedy “Over the River and Through the Woods.”

Ross plans to attend the unveiling of the statue in Albert Lea on July 2 and has invited Henry Winkler, who played “The Fonz” on “Happy Days,” to attend because she attended his bronze statue unveiling in Milwaukee a few years ago. The committee hopes Winkler’s filming schedule of his show “Barry” will allow him to attend.

Fundraising continues and anyone can donate any amount. Engraved pavers will be installed in the sidewalk areas in front of the theater and are available for $250 for a 4-by-8-inch paver with three lines of lettering or a $500 paver with six lines of engraved names and messages. A bronze plaque will be attached to the bench for any donation of $5,000 or larger. Orders are accepted through May 1.

For more information and forms for ordering a paver or to make a donation, call the Albert Lea Convention and Visitors Bureau office across from the theater at 373-2316.

More details will be available as the date approaches.

Riverland maneuvers through, learns from COVID