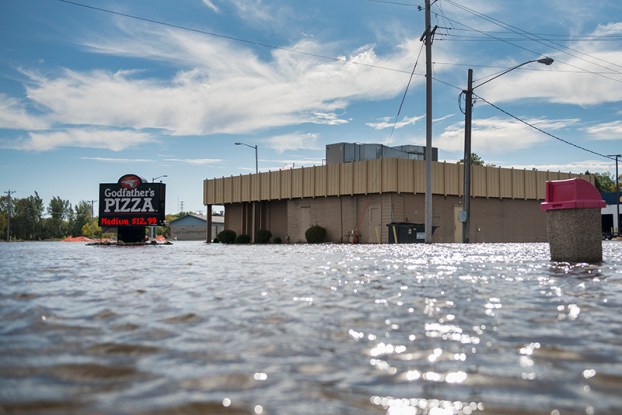 The Albert Lea City Council on Monday approved the purchase of the former Godfather’s Pizza property on East Main Street that will be turned into a storm water retention pond when the street is reconstructed in 2022.

The purchase price for the property, at 509 E. Main St., was $390,000, which the city will be reimbursed for with state bonding dollars, City Manager Ian Rigg said during the meeting. The city is purchasing the property from BRHB Inc. of Spirit Lake, Iowa.

Rigg said the purchase price was based on an appraisal of the land and existing structure on the property.

The storm water retention pond will be one of two planned at the base of the Main Street hill, between East William and East Clark streets.

The ponds are part of a larger plan to reduce flooding in that area. The Minnesota Department of Transportation also has plans to raise the road 2 feet when the street is reconstructed. The new height is expected to be able to handle a 10-year flooding event or a heavy-precipitation storm that occurs once every 10 years. In the past, the road has been closed for various lengths of time, ranging from a few hours to as much as two weeks in 2016.

• Approved an interim use permit for a temporary communications tower for Verizon Wireless when the central water tower is decommissioned.

The city is under a location contract with Verizon for antenna placement on the water tower, and to ensure continued communication service for Albert Lea while the tower is decommissioned, an interim tower will be put in place.

• Approved working in the right-of-way at 147 N. Broadway to install the new Marion Ross statue in front of the Marion Ross Performing Arts Center.

• Amended zoning and the land use map for property at 423 Adams Ave. The property will be rezoned from limited industrial to planned development to accommodate an adaptive reuse housing development.

• Accepted a two-year contract for biosolids removal from the storage tanks at the wastewater treatment plant for $230,000 from Oyer Trucking of Hayward. The sludge will be removed from the tanks and applied on approved land near the treatment plant.

• Approved repairing the aerial apparatus that has been malfunctioning for the fire department for less than $100,000 at a company called E-ONE Bronto in Florida.

• Accepted a donation of $1,150 for a memorial bench in memory of Marilee Hermanson Citsay.