COVID-19 update: More than a quarter of Minnesotans have at least one vaccine dose 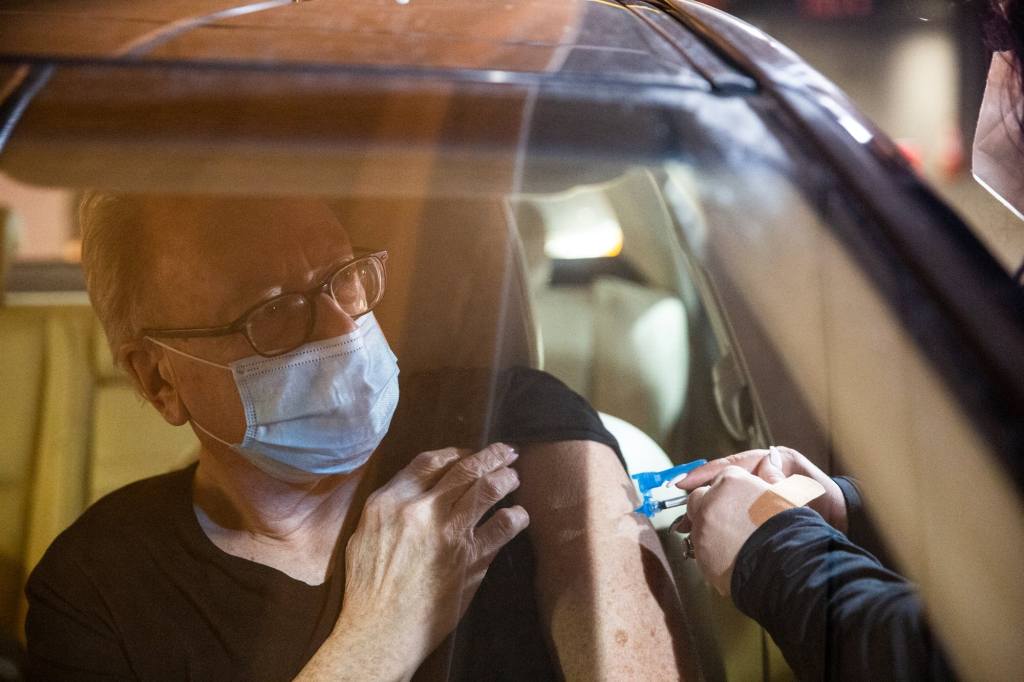 Eugene Heiberger receives the Johnson & Johnson COVID-19 vaccine through the window of his car at a HealthPartners drive-up vaccination site in Bloomington on March 5. Evan Frost/MPR News file

More than a quarter of Minnesota residents have received at least one dose of a COVID-19 vaccine, state health officials announced Sunday.

That’s more than 1.4 million people. More than 15 percent of state residents have completed their vaccinations, whether that’s the two-dose Moderna and Pfizer vaccines, or the one-shot Johnson & Johnson vaccine.

Those encouraging milestones come as the overall vaccination pace has remained fairly flat. Averaged over the past week, the number of vaccinations each day in Minnesota ticked upward to about 41,137 as of Sunday’s update.

That average had reached a record high of more than 43,000 a week ago.

While the state’s made progress in vaccinations, especially among those age 65 and older, it hasn’t yet vaccinated enough people to establish a herd immunity, and there’s a danger of another surge.

“We are in a race between the variants and the vaccine, and the decisions we all make in the next few weeks will have a lot to say about the outcome of this race,” Kris Ehresmann, the state’s infectious disease director, told reporters Friday. “We need to be cautious a little while longer.”

Case counts and hospitalizations, however, have trended upward recently, reinforcing the belief that Minnesota’s in a race now to vaccinate people quickly enough to avoid another statewide COVID-19 surge.

Nearly 840,000 people — about 15.1 percent of the state’s population — have completed their vaccinations, while more than 1.4 million — 25.3 percent — have received at least one dose, including more than 78 percent of people age 65 and older.

Minnesota anticipates getting 350,000 doses the week of March 29, Gov. Tim Walz said Friday. Starting in April, officials also expect the feds to deliver 100,000 doses a week of the Johnson & Johnson vaccine, which requires only one dose.

According to the Freeborn County Public Health Department, there are 76 active cases in the county. No new hospitalizations or deaths were reported.

As of Friday, 8,421 people in Freeborn County had received at least one dose of the COVID-19 vaccine and 4,298 had received the completed series.