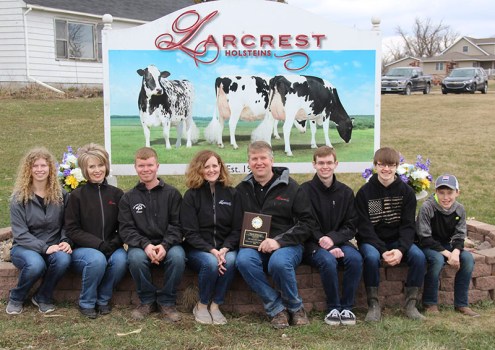 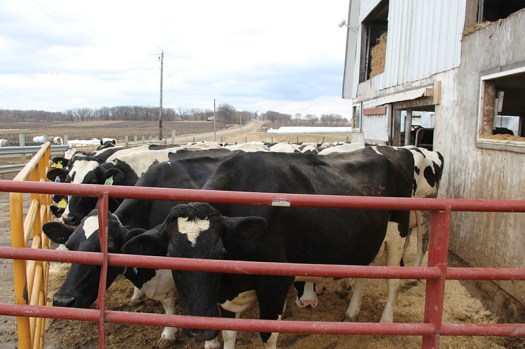 Jon Larson said they milk about 170 cows a day at his farm. Sarah Stultz/Albert Lea Tribune 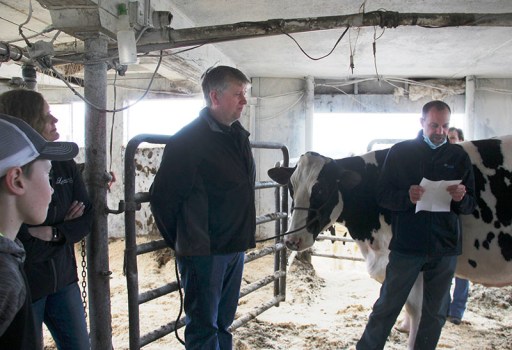 Eric Hunnicutt, right, reads information about Jon and Ann Larson and their operation Larcrest Holsteins as he awards them with the Farm Family of the Year Award. Sarah Stultz/Albert Lea Tribune 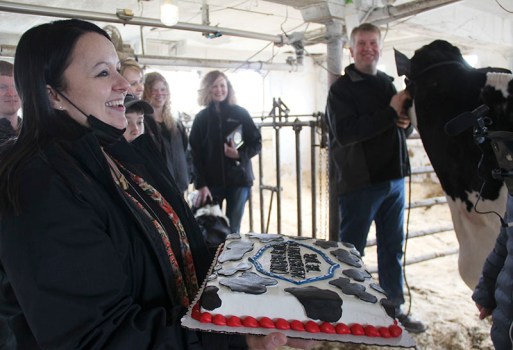 In addition to a plaque, the chamber staff presented Jon and Ann Larson with a cake for their recognition of Farm Family of the Year. The cake was decorated with spots like a cow. Sarah Stultz/Albert Lea Tribune 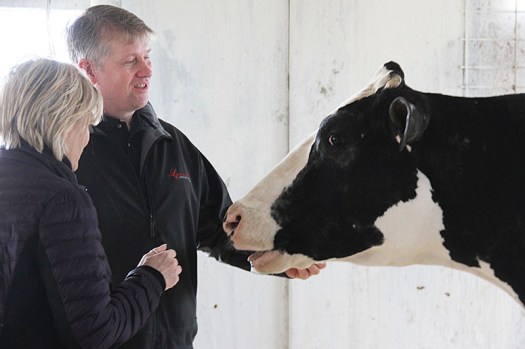 The Albert Lea-Freeborn County Chamber of Commerce awarded Jon and Ann Larson and their family with the 2021 Farm Family of the Year Award Friday afternoon during a small ceremony at their farm.

The Larsons own and operate Larcrest Holsteins west of Twin Lakes and have sustained a multi-generation dairy farm, said Eric Hunnicutt, who presented the award from the chamber’s Ag Committee.

Hunnicutt said the farm has had registered Holstein cattle since the 1960s, and they currently milk about 170 cows. In addition, they raise young stock on the farm and farm about 600 acres that produces feed for their herd.

The Larsons have also been active in the community in various clubs and organizations, including the 4-H Club, and serve in their church. Jon Larson is also president of the Dairy Herd Improvement Association.

Jon Larson, who stood next to his family and his favorite cow named Crimson during the ceremony, said the milk that is produced from the cows on the farm goes to New Ulm and is made into butter, cheese and dry products. Their biggest customers are Kwik Trip and Domino’s Pizza.

He said it takes five to six hours each morning and night to milk the cows, and then there are chores afterward each time.

In addition to selling its milk, Larcrest Holsteins has been successful in recent years with selling its genetics in several countries across the globe, including in countries such as Canada, Mexico and France, among several others.

“I’m the luckiest guy you know. I do what I love in a place I love with the people I love, and it doesn’t get any better than that,” Jon Larson said.

He shared some information about Crimson, who was a clear spotlight in the ceremony. He said a good cow will produce between 20,000 and 25,000 pounds of milk per year, and in Crimson’s about 14 years, she has produced over 350,000 pounds of milk.

The Farm Family of the Year Award is typically given out in the annual ag luncheon hosted by the chamber. Chamber Executive Director Shari Jenson said the chamber has given out the award for about 40 years.

Chamber staff presented the family with a cake specially decorated to look like the spots on a cow, and the Larsons also had cheese and milk for those in attendance to sample.

The Larsons will also be recognized in August at FarmFest.