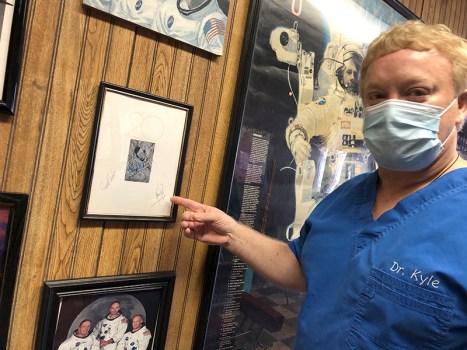 Kyle Sprecher points to a photo of the footprint from the first moon landing signed by Walter Cronkite, Buzz Aldrin and Neil Armstrong on Jan. 29 in Lake Mills. David Mayberry/Albert Lea Tribune 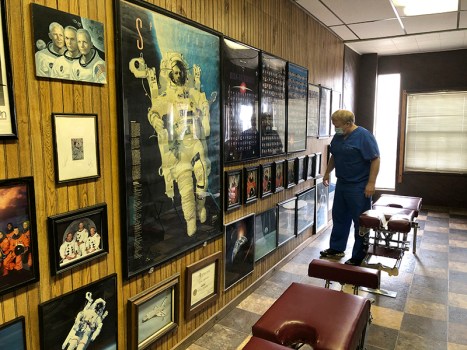 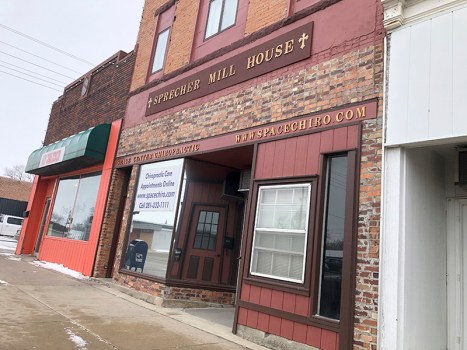 LAKE MILLS — Kyle Sprecher is happy to be home, and if his plans play out, he’ll be spending more time in the area with family and friends.

“When I’m here, I’m busy,” he said. “It’s great to be back. I just wanna come home, plant some roots and help the locals.”

In addition to mending joints and aches, Sprecher’s three-plus decades of professional experience includes work in public health and public and corporate wellness program formulation. He’s hoping to find enough clients in all areas to make it work.

“I feel like I’m launching a whole new life with family and local friends,” he said.

Sprecher grew up in nearby Scarville, graduated from Lake Mills and later wrestled at the University of Northern Iowa.

The name of his business (its first location is in Webster, Texas, outside Houston) comes from the bulk of his professional experience as a contract chiropractor for NASA. It’s also an acronym for Sprecher Preventive Alliance and Chiropractic Education.

That allows him to tie the wellness and rehabilitation aspects of his work to the two centers.

Sprecher, while completing studies at Texas Chiropractic College, was also a test subject for NASA. He completed all of the training required of astronauts; he says he turned down requests to apply for that title or any missions.

While starting his chiropractor business, he earned a master’s degree in fitness and human performance and also studied business and public speaking.

The mix of training and experience made him a valuable resource for boards and commissions.

Sprecher helped standardize wellness programs for large employers in Texas. He lectured at NASA, did contract work for public health groups and served on advisory boards.

Sprecher speaks at conferences and has been a regular guest for launches in the U.S. and Russia.

His ideal business model for the Lake Mills office includes working with area companies on safety, wellness and rehab programs, capitalizing on telehealth options and utilizing his chiropractor space, as needed.

He says he has good working relationships with area providers Mayo and Mercy.

Sprecher has owned the Main Street building — Sprecher Mill House — for some time and for a while operated “an upscale wine bar” in the area that’s now lined with chiropractor tables.

“The property is completely leased out, so it’s making money whether I’m here or not,” Sprecher said. “It’s nice to have this property on Main Street for visibility.”

He already had some equipment and plenty of astronaut memorabilia in the adjacent room on the main floor. Those pictures remain on the west wall.

Sprecher has hired Michael Heyer, of Titonka, as an associate doctor.

“He’s really good, and I’m happy to have him,” Sprecher said.

He’s alternating two-week stays in Lake Mills and Texas until he gathers enough business to make the north Iowa move permanent. Sprecher is busy finalizing details on an upcoming lecture series he’ll offer through the wellness consulting business he runs in Texas that also has a space-themed name: NASA Fitness.