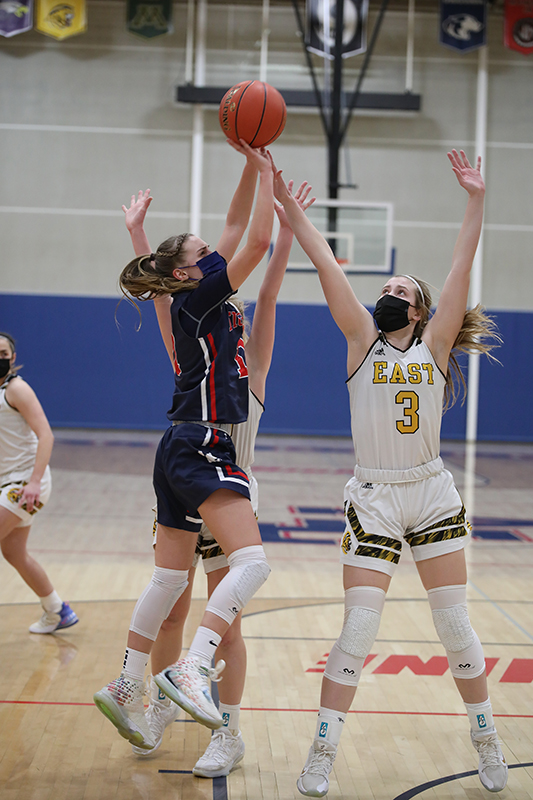 Jeffrey said her next goal is to become the all-time leading scorer for the Albert Lea girls' program. — Tribune file photo

Albert Lea junior Taya Jeffrey not only led the Tigers with 18 points in the victory over the Falcons Monday night, she also etched her name in the school’s history books, becoming one of the select players in program history to reach the 1,000-point milestone.

Entering the game against Faribault, Jeffrey needed just seven more points to reach the marker only nine girls before her have been able to reach. With around seven minutes left to go in the first half, Jeffrey hit a three-pointer to eclipse the threshold.

“It feels great to have reached this milestone,” Jeffrey said. “I have put thousands of hours into basketball, and to see it paying off in this way is such an amazing feeling.”

Jeffrey said she became aware that she was approaching the 1,000-point mark a few games before she hit it. She said she put a lot of pressure on herself to get to the milestone especially in the two-games leading up to Monday.

Jeffrey blew past the mark Monday night and ended the game with 18 points and six rebounds in the 54-43 victory over the Falcons, the Tigers’ third win of the season. Her 18 points puts her career total at 1,011, as she leapfrogs 2011 Albert Lea graduate Alyssa Sager for ninth on the all-time Albert Lea scoring list. She currently sits just 11 points behind 2014 graduate Sydney Rehnelt for eighth. Jeffrey’s current goal, however — the No. 1 spot on the all-time scoring list.

That spot is held by 2014 graduate Bryn Woodside, who totaled 1,340 points throughout her career. With a handful of games left this season, and the hope of a full season in 2021-22, that goal isn’t out of reach.

Head coach Jason Thompson said he thinks it’s possible for Jeffrey to rewrite the Albert Lea record books, not only in scoring, but in many other statistical categories.

Thompson said he knew Jeffrey was a special player from the first summer he started coaching her.

“Taya is the type of player that is always looking to make her teammates better,” Thompson said. “She has a tremendous basketball IQ, top line defender, and explosive on the offensive end. Having said all that, she is also one of the most humble players I’ve ever coached. She takes nothing for granted and is always putting the time in, to put herself in position to succeed and make her teammates better.” 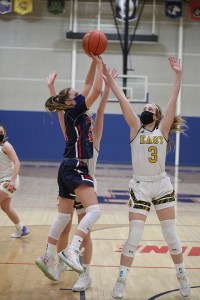 Jeffrey said her next goal is to become the all-time leading scorer for the Albert Lea girls’ program. — Tribune file photo

While reaching the top of Albert Lea’s all-time scoring list is one of Jeffrey’s goals, she also wants to help her teammates and see the program continue to grow.

“A bigger goal of mine is to keep building up this program we have in Albert Lea,” Jeffrey said. “I don’t think some people realize the crazy potential some of my teammates have, and I want to be able to help them and be a part of the great things that are to come in this program. We have something special going, and every year we keep trending upwards. I’m so grateful to be a part of this team.”

As only a junior, Thompson said Jeffrey is drawing interest from some Division 1 schools in the West as well as numerous Division II schools in the Upper Midwest, namely the Northern Sun Intercollegiate Conference.

Before college comes rolling around, Jeffrey is staying focused with her time in the Albert Lea program. Thompson said it’s every coach’s dream to have a “team full of Tayas.” Thompson said Jeffrey is always putting in tireless hours in the gym, in the weight room and in the classroom.

“Albert Lea basketball is just the beginning for this young lady,” Thompson said. “She is going to be successful on and off the court in her life, and it’s been special to me to play a very small role in her success.”

Through all the success her basketball career has already seen and the achievements that are coming in the future, Jeffrey said there are many people behind the scenes to thank.

“My parents, brother and my grandparents have been there for me since day one,” Jeffrey said. “They would drop everything and anything to come watch me play, and support me in doing what I love.