John was born Dec 14th 1929, the youngest child of Henry and Cora (Stam) Crum. He joined his four older sisters in a little town in Otley, Iowa. When he was 6 years old the family moved to Hollandale, Minnesota. They worked in the fields in the vegetable growing area. He graduated from 8th grade public school. He and Edna Smidt married June 27, 1951. They were blessed with one daughter and four sons. 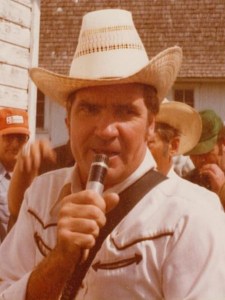 John partnered with Glenn Shaunce in a farming operation, growing Sugarbeets, Potatoes, and other crops.

He was a fast talker when he milked the cow he would auction off the cow. That was the beginning of auction sales. He was a very good auctioneer  (the best in the county). It was a sideline besides farming.

The family spent camping, fishing and going to the lakes for 17 summers. John & Edna also took the motor home in the winter as snow birds in the San Diego area.

In 2008, the time came to sell in Minnesota. They took up full time residence in Sky Valley, California. John enjoyed life and kept busy, building his desert rock garden, horseshoes with his friends, riding his bicycle, walking, playing harmonica, and doing all these things with a ready wit, and always, a song was ever present. He continued with his auctioneering for fundraisers, and other events. A man of many talents. He will be sadly missed.

Burial of the Cremains will be March 27 at one PM, at the Hollandale Cemetery.

It is well with John’s soul. Keep singing, John.