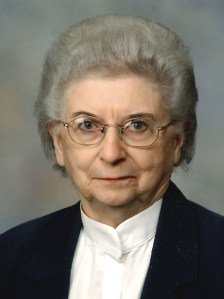 Mary was born in Albert Lea on February 22, 1926 to Thomas and Mary Doyle and graduated from Albert Lea High School in 1943. After graduation, she worked at Wilson Meats in Albert Lea. She also attended classes at Rochester Junior College. On July 9, 1951 she married Eugene O’Marro at St. Francis Catholic Church in Rochester. She worked as a secretary for Judge Harry Blackmun prior to his appointment to the U.S. Supreme Court. She was self employed as a real estate broker, for more than 25 years. Mary was a gracious and kind, not only to her children, but also to the many people she served over the years.

Mary was preceded in death by her husband Eugene, brother Thomas, mother and father.

A funeral mass will be held on Saturday, March 27, at the St. Pius Catholic Church, 1315 12th Avenue N.W. in Rochester. Services begin at 11:00, with an hour visitation 1 hour prior to the service. Arrangements are with Mahn Family Funeral Home, Rochester.

In lieu of flowers, please consider a donation to St. Pius X in Mary’s name.