Meals on the Go adapts for pandemic 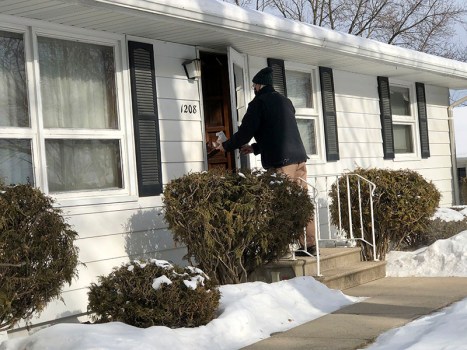 Craig McCormick delivers a Meals on the Go package to a resident on Thursday, Jan. 28 in Albert Lea. David Mayberry / Albert Lea Tribune 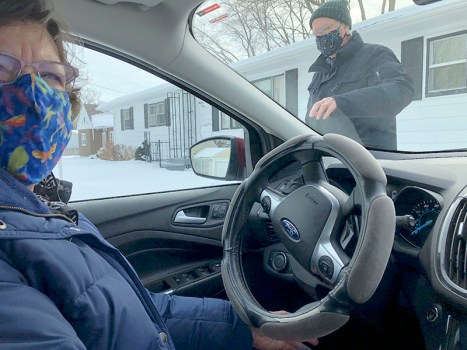 Sue McCormick waits for her husband Craig to return to their vehicle while volunteering for the Meals on the Go program on Thursday, Jan. 28 in Albert Lea. David Mayberry / Albert Lea Tribune 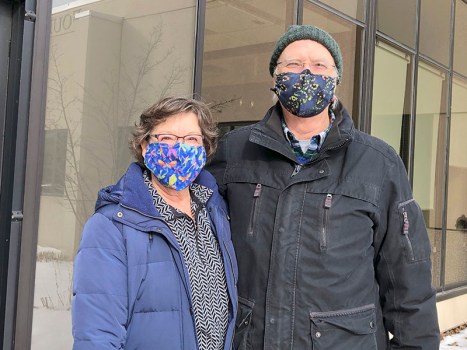 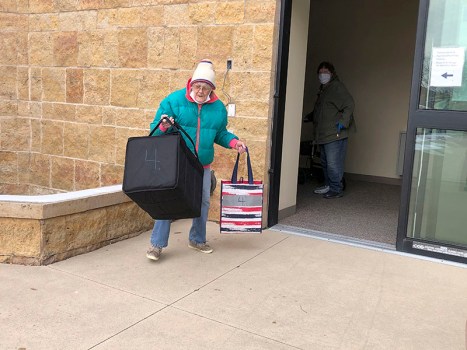 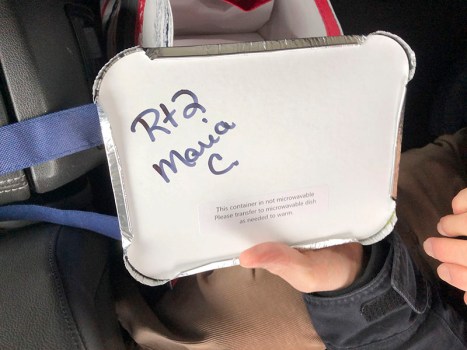 Meals are placed in foil and paperboard packaging or in paper bags on Thursday, Jan. 28 in Albert Lea. David Mayberry / Albert Lea Tribune 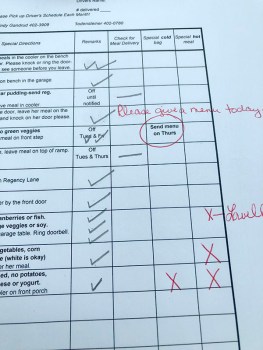 Directions detail which houses receive which meals Sue and Craig McCormick will deliver during their Meals on the Go route on Thursday, Jan. 28 in Albert Lea. David Mayberry / Albert Lea Tribune

Community food program continues, though there is less interaction with recipients than in previous years

The time is still rewarding, but it’s not the same.

And it probably never will be.

That’s the realization Sue and Craig McCormick have made for the weekly Meals on the Go delivery route.

They miss the interaction, but they know it’s for the best. And, despite the global pandemic, meals are still getting to Albert Lea neighbors who need them.

“We miss not seeing their smiles, and they don’t like it either,” Sue McCormick said. “That little contact means a lot to them.”

Cindy Gandrud is the director for Meals on the Go. The process before delivery has changed, as well.

Instead of drivers sharing a cup of coffee and gathering in the cafeteria, they wait in the parking lot of Mayo Clinic Health System and Fountain Centers. If the weather’s nice, they can socially distance near the door. That hasn’t happened in a while.

The meals are packaged in foil containers with paperboard lids or in paper bags, depending on the food item. From the Mayo cafeteria, they are moved by cart and elevator to the next floor. There, Gandrud divides the meal containers by route — seven in all — into fabric bins and bags. Some routes, like the McCormicks,’ require more than one bag.

When Gandrud is done, she hangs a bright pink sign in the window, easily visible from the parking lot.

Food is ready for pickup.

The volunteers, almost all retirees, move toward the Fountain Centers door and lightly mingle along the way.

“The drivers have done really well adapting to the changes,” Gandrud said.

On this Thursday, their regular volunteer delivery day, the McCormicks have 14 meals to drop off at nine locations. After three years, it’s a well choreographed routine.

Both are retired. Sue was a tutor at Riverland Community College, while her husband spent more than three decades as an optometrist, including 27 in Albert Lea.

She hands the clipboard with their list of addresses and meal notes to her husband. As he’s checking the list, she says, “Watch out for Larry,” who sometimes has special food requests.

The couple has been delivering weekly for three years, always on Thursdays.

Meals on the Go, Craig McCormick notes, doesn’t usually deliver when schools are closed due to weather.

“It’s been different,” he said as they arrive at the first stop, just past City Arena.

“For a lot of them, there’s not a lot of other social contact. In the past, we could walk in and set the meal on the kitchen table.”

They certainly can’t do that now. Meals are set on surfaces, inside or outside, depending on the request of the recipient.

“COVID has made it sadder. There’s not as much eye contact,” Sue McCormick said. “You could hold their hands, but now we hope to read lips.

“I’m not sure if it will ever get back to the way it was. I could see this being the norm going forward.”

On most other mid-mornings, the McCormicks enjoy their one-acre plot when the weather is right. They have flower beds and a vegetable garden. Craig McCormick is still active in the Lions Club, but the group has taken a break due to COVID and lack of numbers due to heavy snow bird membership.

You can tell, given the time of year and the task, they value this time and its outcomes. Sue McCormick heads past the Albert Lea Family Y for the second and third deliveries.

“We see them some through the window,” she said. “You get to feel like you know these people, but you really don’t know them at all.”

Volunteers are tasked with checking on recipients, even if for a fleeting moment. Some have found recipients in need of assistance or deceased. In either case, there is a Meals on the Go protocol.

“We do make eye contact, and make sure that they’re all right and that the person is there,” Gandrud said.

The fourth delivery is further south. At this home, Craig McCormick pauses near the door of the home to make sure the woman received her food.

“She was kind of turned sideways in a chair,” he said in a reassuring tone. “But I could see her.”

The sixth and seventh stops are even closer.

A door is locked that usually isn’t, but he knows how to attract the attention of the homeowner. A minute later, his wife reminds him to “grab the special ones.” She knows the home and the food requests.

And just as quickly, “OK, down to the last one.”

On Front Street, the snow is knee-high and there isn’t a lot of room to jump out or park.

“I’ll go forward so you can get to the sidewalk,” she said.

She puts the car’s emergency lights on to slow traffic and then grabs the clipboard, now in an empty fabric bag. She fills in a few lines in the top corner of the sheet.

“That would be it,” Craig McCormick said as she finished.

Counting the time driving back to Fountain Centers, the route takes 30 minutes.

The couple returns the Meals on the Go bags to Gandrud, who’s waiting for the same from the other drivers.

Gandrud confirms Sue McCormick’s hunch from less than an hour ago: Delivery is likely forever changed due to the pandemic, largely due to the susceptibility of both recipients and drivers.

“I worry about the people we’re helping, but also about our drivers,” she said.

Gandrud takes a call from a driver who is still on the route.

The volunteer says he’s stopped at a house twice — once at the start of his route and again just now, but the resident isn’t answering.

Gandrud says to return the meal and she’ll call the home to check if they want a meal today. The person, it turns out, had canceled earlier this week.

Not all of the routes are like the one the McCormicks drive, Gandrud said. But they’re all over Albert Lea.

“Delivery is certainly different than it was before,” Gandrud said. “The drivers have done really well adapting to the changes. They’ve been wonderful through this.”

Meals on the Go needs volunteers to assist both with food preparation and food delivery. For more information, contact Cindy Gandrud at 507-402-3909.