Principal, pastor named as this year’s Citizens of the Year 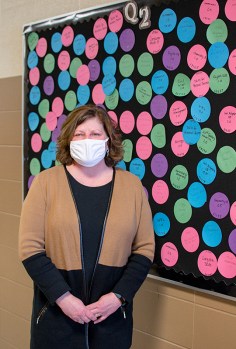 Johanna Thomas poses in fornt of her favorite spot in the Area Learning Center — the wall of completed credits by students. Hallie Cantu/Albert Lea Tribune 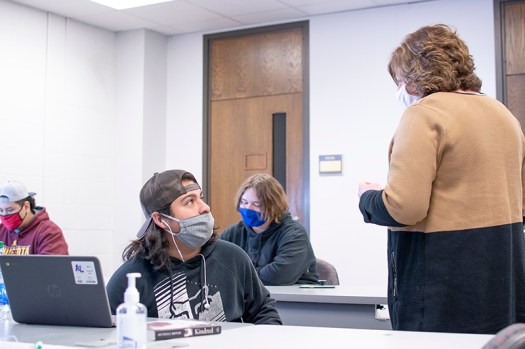 Area Learning Center Principal Johanna Thomas interacts with students during math class to see what they are working on. Hallie Cantu/Albert Lea Tribune 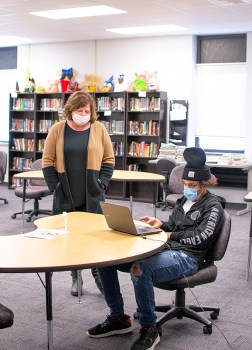 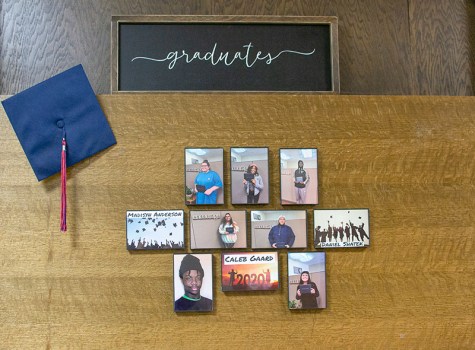 A wall of graduates hangs in the hall of the Albert Lea Area Learning Center at Riverland Community College. Hallie Cantu/Albert Lea Tribune 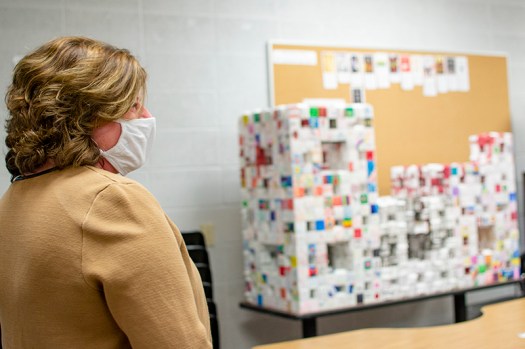 Area Learning Center Principal Johanna Thomas listens as teacher Andrew Gustafson speaks in his classroom about the creative way his classes showcase the completion of credits in the creation pictured at right. Hallie Cantu/Albert Lea Tribune 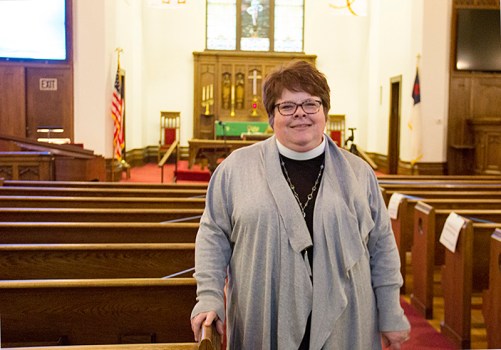 Eileen Woyen started as pastor at Trinity Lutheran Church four years ago. This year she has helped grow the church's community meal program with other members of the church. Sarah Stultz/Albert Lea Tribune 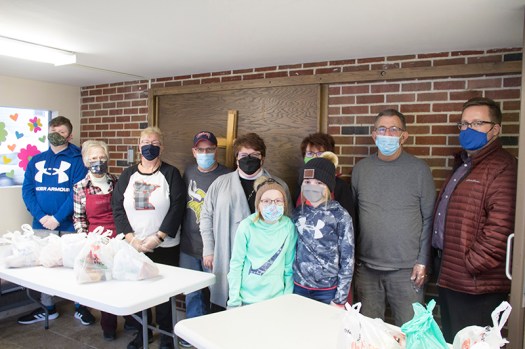 Eileen Woyen, pastor at Trinity Lutheran Church, center, and other volunteers from the church stand behind a table with bags of food on it for a meal distribution program at the church each Wednesday. Sarah Stultz/Albert Lea Tribune 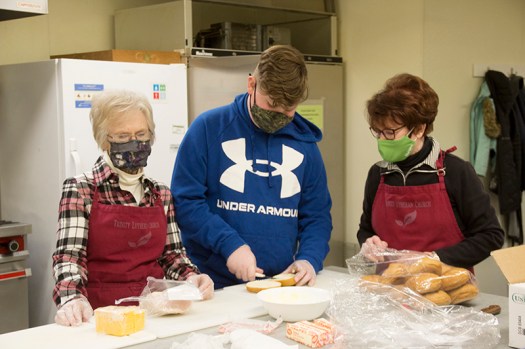 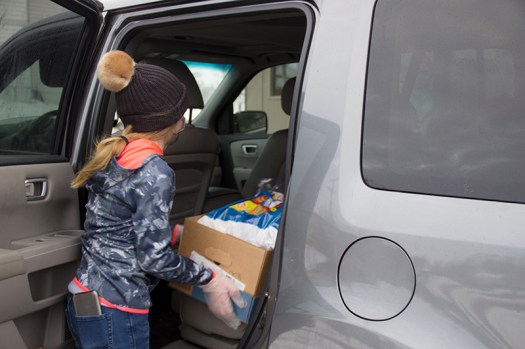 Youth and others help distribute meals as part of a meal program each Wednesday at Trinity Lutheran Church in Albert Lea. Sarah Stultz/Albert Lea Tribune

Despite a daunting year because of the COVID-19 pandemic, women continue lifting up those around them

Though the COVID-19 pandemic has put a strain on many areas of society, there have also been many bright spots in the last year of people who have gone out of their way to make a difference.

Thomas started with the Albert Lea school district in 2004 after teaching in Casa Grande, Arizona, since 1989.

Superintendent Mike Funk said Thomas is the district’s longest-serving principal in the district and has impacted the lives of students and staff at both the secondary and elementary levels.

“In her current role as principal of our ALC, she is very effective, as she understands the challenges that many of our students face,” Funk said. “This perception allows her to lead her staff to best meet the needs of her students.”

Thomas said she enjoys the ALC because of the unique way teachers there can individualize students’ learning programs and because of the opportunity to develop relationships with students.

In addition to her work at the ALC, in her role she oversees the district’s summer school program, which she anticipates will likely be larger this summer because of the academic challenges that have risen with the pandemic.

Thomas said it has been a challenging year for students at the Area Learning Center — with the most difficult challenge for them being attendance.

Students at the ALC have a hybrid schedule, rotating in-person and distance learning. In mid-February, students added back Fridays on a rotating basis.

Though the students are learning resiliency and confidence, Thomas said many have expressed they are missing the personal connection that is often found during the school setting. She said many have some great ideas of how to build those connections in the coming months.

Thomas said though she has worked in a variety of roles in education for over 30 years, she has thoroughly enjoyed being able to help and connect students who have unique challenges and barriers.

Kelsey Thomas, who nominated her mother for the award, said her mom “has a knack for helping students realize their potential, their dreams and goals, and providing endless support to help students succeed in an individualized way.”

Teacher Andrew Gustafson said Thomas has brought a lot to the ALC in her time there and she does a great job of being flexible with everything going on related to the pandemic.

“She has a good mindset of, ‘We’re here to help our students’ — whether it’s credits, the food pantry, the coat rack,” Gustafson said. “She’s been a great fit for everybody.”

She noted Thomas has great ideas and is supportive of the things that teachers want to do in helping prepare the students to go out into the world.

“When they walk out of there, the kids know they’ve been cared for, and it starts at the top,” Olson said.

Woyen moved to Albert Lea from Akron, Ohio, 4 1/2 years ago with her two sons and husband when she received her call to become pastor at Trinity Lutheran Church.

“I kind of felt like a missionary coming,” she said.

When she arrived in Albert Lea, she said the church conducted long-range planning. Out of that planning, one of the main focuses was the church’s Wednesday ministry.

They were already doing meals for members of the congregation and youth who were coming for confirmation classes.

“We thought why not the community?” she said.

In March 2020 they were serving a meal to many church members along with some community members, and then the COVID-19 pandemic began and all their efforts shifted. For a little while, Woyen said, they didn’t have the meal, but then when they started it up again, they shifted it to handing out bag lunches as a safety precaution. Previously, the church had given out warm meals — often leftovers from funerals or soups.

“The word of the year is adaptability,” Woyen said. “If you try one thing and it doesn’t work, you try new things.”

Though the meals cost more in the way they are serving now, she said the congregation has been generous in helping to make it possible. She has also been able to secure some grants.

“I’ve been their cheerleader in finding money,” she said.

Lance Skov, who nominated Woyen for the award, said Woyen has been instrumental in getting the word out about the meal and helping with it.

She has also encouraged other causes throughout the year such as knitting or buying scarves and warm items to donate in November and December, collecting food for the Salvation Army and fundraising for Minnesota Adult and Teen Challenge.

Woyen said she has been humbled to see all the people who come by the church, particularly when she sees teenagers coming to pick up food for the rest of the family.

“I’m wishing we could do more, but this is what Jesus taught us to do — love God and love others,” Woyen said.

Woyen also conducts weekly Zoom Bible studies for members of the church as well as Zoom confirmation classes. She and a few other church members have a virtual service on Wednesday nights in addition to the Sunday service.

She said the online services have actually helped increase participation amongst some youth in the church.

Skov said Woyen also has helped out a lot with the pop-up food pantries put on by the United Way of Freeborn County, in which she volunteers with and helps recruit other volunteers.

Woyen, who recently celebrated her 20th year of being ordained, said her goal is to have an outward focus.

This year has reemphasized to her the importance of serving within the community.

“No church should only be within its walls,” she said.

“We aren’t just a building. The church goes beyond the building. It’s hard when you can’t worship together — and we miss that — but it’s also taught us that we can be the church in our homes, in our families. We’re being the church to people not just in Albert Lea. We have family and friends from all over the United States now who almost consider us their church.”

With the multiple youth who died in the Albert Lea area in 2020, she said she thought it was important to offer her care and support to other area youth and their families and was a part of several prayer vigils and other events in memory of these youth.

She said though she did not help organize any of these events, she thinks it was critical for her to offer her support and let the friends and families  know they were supported.

Skov described Woyen as a “remarkable and caring person,” one who this past year, especially, was always there for anyone who wanted to talk.

Now that she has been in Albert Lea for almost five years, Woyen said she has grown used to the community and has grown to love it.

“It’s a good community,” she said. “Of course we have our problems, but it seems like we’re willing to talk about it.”

Nominees for Citizen of the Year

Members of the Citizen of the Year Committee