Richard F. Lybeck, 82, of San Diego CA, passed away on February 22, 2021 surrounded by his loving family. Dick was born near Chicago, Illinois on Oct. 13, 1938. He later raised his family in Albert Lea and moved to Bovey, Minnesota to his beloved log cabin, Kindawa, after retirement in 1996. 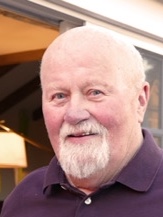 Dick is survived by his spouse, Sally Lybeck, his son Marc Lybeck, and two daughters, Margot Lybeck Wallace and Tamlyn Lybeck McKean, their spouses, his grandchildren, and great-grandchildren. He is also survived by his brother Oliver Lybeck, his wife Elenore, and numerous nieces, nephews, and great- nieces and nephews. Dick was preceded in death by his adored sister Evelyn, Evy, Lybeck and his loving parents, Richard V. and Edith Lybeck.

Dick graduated from Luther College in 1961 with a major in Elementary Education and a minor in Physical Education. Dick taught 6th grade and coached for 35 years in Albert Lea. Later he went on to obtain his Masters Degree and administration credential from Mankato State. His passion for the great outdoors led him to start many outdoor educational programs for his students. He was instrumental in creating 6th grade camping and cross country ski programs. With his love of history and nature he made history come alive for his students. This was achieved in part by visiting the Big Island Rendezvous and having local Lakota/Dakota indigenous cultural experts share their history. Former students will always remember the poem that epitomized his life, “It’s All in the State of Mind’ by Walter D.Wintle. The highlight of his career came in 1989 when he was named the Minnesota Education Association’s Teacher of the Year.

As an avid life-long learner, he had an urge to pursue many hobbies. His love of sports carried him throughout his college career, where he lettered all 4 years in football and his team were the conference champions 3 out of his 4 years. He taught himself to wood carve and loved to draw. Some years after helping local builders build his dream log cabin, he built a log sauna with the help of family members. Dick thoroughly enjoyed his Saturday night sauna, dip in the lake or a bucket of cold water with a stiff toddy while enjoying the “sauna glow”. After retirement he became an active member of the Lawron Presbyterian Church community where he fully realized his Christian faith and love of Jesus. He truly was a Renaissance man.

An online tribute and memorial is available at https://www.forevermissed.com/richard-f-lybeck/visitors . A memorial service will be held on Saturday, August 14th, 2021 at the Lawron Presbyterian Church, 35254 Scenic Hwy, Bovey, MN 55709. In lieu of flowers/gifts, donations can be made in Memory of Richard “Dick” Lybeck to the Lawron Presbyterian Church, address above. Online donations through Venmo can be made to @Sally-Lybeck and she will send to the Lawron.