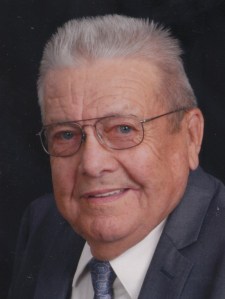 Robert Wilford Johnson, was born at home on December 30, 1931 to Willie C. and Alice (Lund) Johnson. He was baptized on March 4, 1932 at Badger Lutheran Church in Iowa and confirmed at Hartland Lutheran. Robert attended school in Freeborn, MN and graduated in 1949. Robert married Harriet Helland April 8, 1951 at West Freeborn Church.

Robert worked construction on Highway 13, milked shorthorn cattle on the Emrud farm in the early 1950’s and drove bus for Freeborn for 6 years. In 1959 Robert and Harriet purchased the Wittmer-Hoeg farm. Robert milked 50 Holstein cows and made a lifelong living on the farm until his retirement. Robert was picked “Outstanding Young Farmer in 1967”.

Robert was president of West Freeborn, served on the Freeborn County Co-op Board for 25 years, and served on Waterloo Board in Iowa. Robert was Vice President at First State Bank of Freeborn and he served as CEO at Ellendale Bank.