‘The Attic’ founder given advocacy award 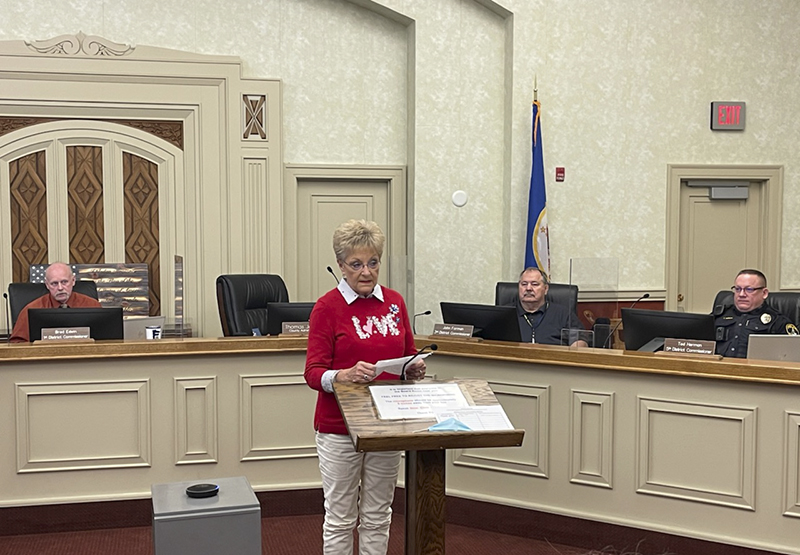 The Freeborn County Board of Commissioners recognized Mary Jo Jensen as the 2021 recipient of the Rose Olmsted Advocacy Award during its meeting on Tuesday.

Jensen has spearheaded a community donation program that assists families transitioning out of poverty and homelessness.

“The need in Freeborn County has been overwhelming at times,” Jensen said after receiving the award at the Freeborn County Government Center. “If we can help one family at a time, we’ve done something good.”

The award dates to 2015 and recognizes “a Freeborn County citizen, professional or volunteer whose advocacy for an individual, family or a community exemplifies service to others.”

Jensen started “The Attic” as part of a confirmation project at East Freeborn Lutheran Church. With the help of school social workers and area pastors, she identified those in need and later collected and distributed items from church members.

“(Jensen) has served tirelessly all while keeping a very low profile and not wanting recognition,” said Donna Nelson, in a nominating letter to the selection committee.

Today, donations come from churches throughout the area, and work to assist clients at the Freeborn County homeless shelter is done through the Albert Lea office of the Southeast Minnesota Community Action Center.

Jensen said she was “truly humbled and honored” to receive the award, and thanked the partnering organizations, and friends and family members who helped move items for recipients.

“We hope to continue this mission,” she said.

Jensen then quoted her mother: “Don’t just count your blessings; share them.”

A volunteering blog by the United Way of Freeborn County notes that Jensen’s work has helped more than 400 families who were receiving assistance from the Freeborn County homeless shelter.

“Mary works endlessly to ensure that no one in Freeborn County goes without basic needs, and that everyone is worthy of dignity and respect,” said Penny Jahnke, Adult Learning Center coordinator, in a nominating letter.

The board zipped through a light agenda in just 30 minutes.

Commissioners next meet at 8:30 a.m. on March 9 for a non-voting, discussion-dominated workshop.

Other highlights from Tuesday included:

There is no timetable by the Driver and Vehicle Services Division to consolidate testing stations. Albert Lea’s site has been closed since the onset of the pandemic.

But there is a March 15 deadline for public comment on the Minnesota Pollution Control Agency’s rulemaking proposal. Public hearings were held virtually in February.

Commissioners indicated that they would like to draft letters proposing to maintain a driving test site in Albert Lea and opposing the PCA’s emissions measure.

County Engineer Philip Wacholz told the group the purchase will complete the fleet’s transition to Mac from International and noted that the funds for the purchase are included in the preliminary 2022 budget.

“These will be the last replacements,” he said. “They are emergency pieces of equipment, and they have to be ready to go in all conditions.”