Tigers advance in Section 1A tourney with 3-1 over Falcons 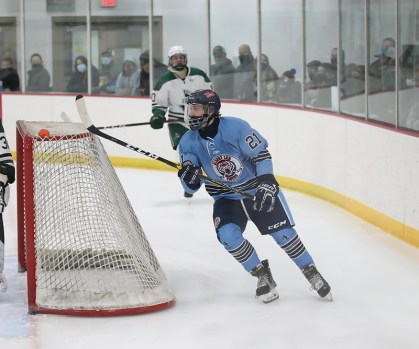 Albert Lea senior Dylan Carlson skates around the Faribault net Thursday night in the opening round of the Section 1A tournament. The Tigers won the game 3-1 and advanced into the section semifinals. Kelly Hendrickson/For the Albert Lea Tribune 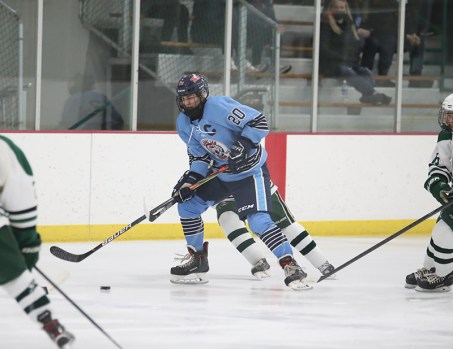 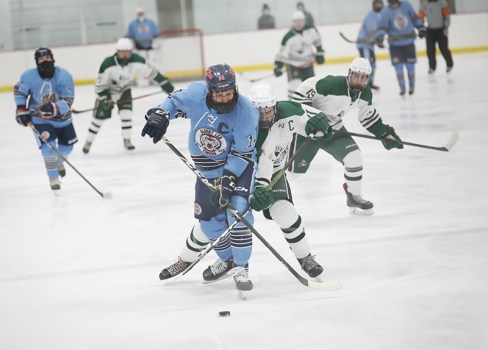 The Albert Lea boys’ hockey team entered the Section 1A tournament as the No. 5 seed and was faced with the task of taking on No. 4 seed Faribault Thursday night in the quarterfinal round.

While the two teams split their regular-season series 1-1, it was the Tigers who came out victorious in the postseason, sending the Falcons home 3-1.

It didn’t take long for the Tigers to get on the board, as sophomore Beau Schreiber scored a goal 31 seconds into the contest. The goal was assisted by senior Blake Ulve.

That would be the only goal scored in the period, as both teams ramped up their defensive play after the early goal.

Sophomore Dakota Jahnke started in goal for the Tigers and saved eight shots in the first period. The Tigers recorded 10 shots on goal in the period, connecting on one of them.

Both teams came out to a quiet opening 10 minutes of the second period. The Falcons were called for a minor elbowing penalty in the 11th minute of the period, and the Tigers quickly took advantage of the power play opportunity when Ulve scored the team’s second goal just over a minute into the power play. The goal was assisted by sophomore Joseph Yoon.

The Tigers made it a 3-0 game with just over a minute left in the second period when Ulve scored another goal, this time assisted by senior Sam Witham.

Albert Lea took that 3-0 lead into the second intermission. Jahnke saved another nine shots in the period. The Tigers took eight shots on goal in the period and were not called for any penalties.

Albert Lea’s defense stepped up to the plate in the third and final period, shutting Faribault out for the majority of it. Witham was called for a minor interference penalty six minutes into the period, but the Falcons were once again unable to score during the power play.

The Falcons finally got on the board in the 14th minute with a goal to cut the Tigers lead to two. However, it was far too late for the Falcons to make any sort of run at a comeback.

Jahnke saved six of seven shots on goal in the period, upping his game total to 21 saves.

The Tigers climb to 9-9 this season and will move into the semifinals of the Section 1A tournament where they will meet No. 1 seed Dodge County. That game is scheduled to take place Saturday night at Dodge County.