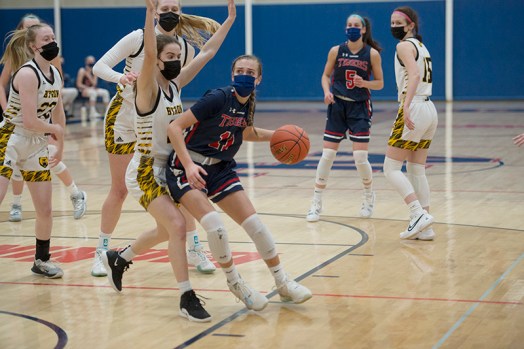 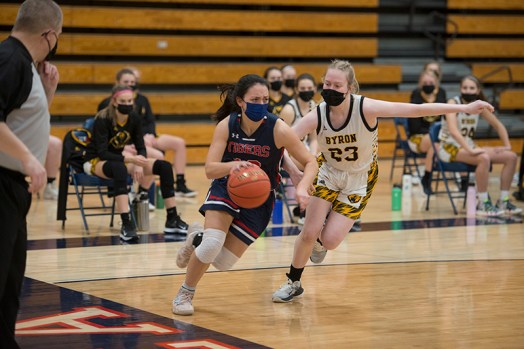 Sophomore Kendall Kenis tries to get by a defender Tuesday night at home. The Tigers defeated the Bears 49-45 in overtime to advance to the Section 1AAA semifinals. Tyler Julson/Albert Lea Tribune 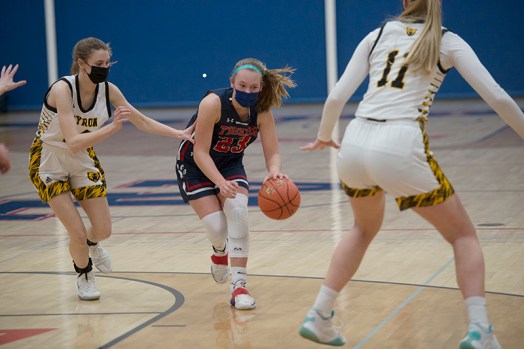 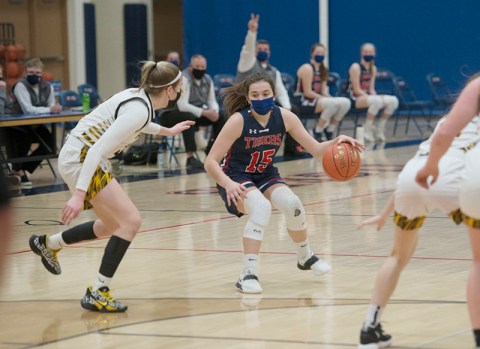 What started out as a slow-moving game in the first half, quickly turned into a barn burner, as the Albert Lea girls’ basketball team hosted Byron in the first round of the Section 1AAA playoffs.

The No. 5-seeded Bears kept themselves in the game with a late game-tying three-pointer, but the No. 4 seed Tigers pulled away in overtime, winning 49-45 and advancing to the next round.

Neither team was able to find their rhythm right away in the first half. Through nine minutes of play, the score was 9-7 in favor of the Bears.

Albert Lea junior Taya Jeffrey was the main option for scoring in those opening minutes, scoring six of the seven points.

The Tigers came out of a timeout with nine minute remaining in the half and promptly took the lead thanks to two baskets from sophomore Kendall Kenis. The Bears came back, however, taking the lead back before calling a timeout with 4:47 left in the half.

Byron climbed out to a six-point lead at one point, but baskets from three different Tigers brought them to within two points by halftime. The Bears led 20-18 heading into the break.

Jeffrey led at halftime with eight points. Kenis had seven, while eighth grader Nevaeh Wacholz had two and junior Jordan Juveland had one.

It was a slow start again for both teams in the second half. Both the Tigers and Bears took turns with the lead through the opening six minutes, until the Tigers called a timeout trailing 26-24 with just under 12 minutes to go in the game.

Albert Lea kept finding ways to tie the game, but Byron always seemed to come right back down the court and tie the game.

Byron once again had a two-point lead with under two minutes to play, but Kenis had enough of the ties and took a shot from three. The ball found the bottom of the net, giving the Tigers a one-point lead with 1:20 remaining.

A missed shot by the Bears forced them to start fouling, where Jeffrey extended the lead to three points. The Bears came back with a quick shot and again sent Jeffrey to the line, where she sank both shots.

Up three with 10 seconds to go, the Tigers played loosely, but it ended up giving the Bears too much space, as they hit a three with 2.5 seconds on the clock. Jeffrey’s half-court heave to win the game missed the mark and the teams went to overtime, 43-43.

The overtime period was all Tigers. Junior Annika Veldman converted on an and-one opportunity followed by another by Jeffrey to put the Tigers in front by two possessions, going on to win the game 49-45.

The Tigers advance to the semifinals of the tournament where they meet No. 1 seed Red Wing Friday night on the road. The previous meeting between these two teams saw the Wingers come out on top 61-52.