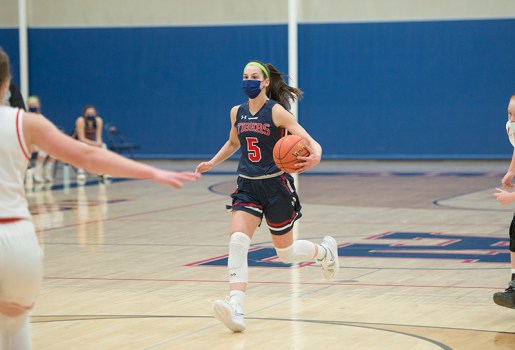 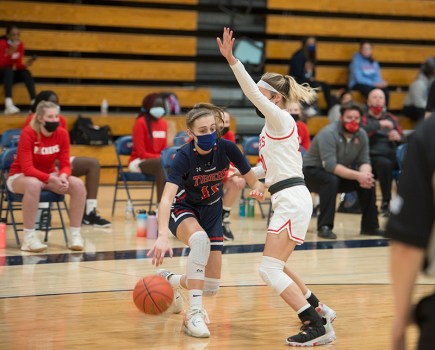 Junior Taya Jeffrey attempts to dribble around a defender Monday night at home. Jeffrey had 12 points and moved into the No. 7 spot on the Albert Lea all-time leading scorers' list. Tyler Julson/Albert Lea Tribune 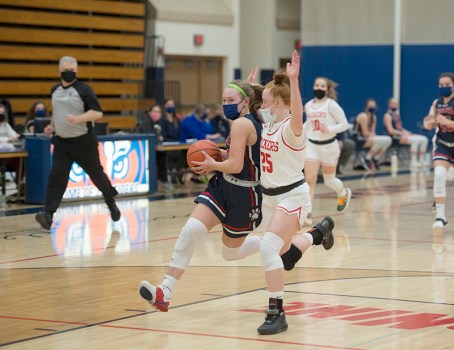 Eighth grader Nevaeh Wacholz gathers for a layup attempt on a fast break Monday night at home. The Tigers win boosts them to 5-11 this season with two games remaining in the regular season. Tyler Julson/Albert Lea Tribune

After falling to Austin by 12 points earlier this season, the Albert Lea girls’ basketball team took them on again, this time on their home court.

The Tigers flipped the script from their first game against the Packers, extending their current winning streak to three by getting three players into double figures, defeating the Packers 45-39.

The Tigers were the first team on the scoreboard, and their defense held strong, not allowing the Packers to score for nearly four minutes of gametime. The Packers also had a strong defense, not allowing the Tigers to get too far ahead while their offense found its stride.

Albert Lea maintained its lead until about six minutes left in the period, when Austin gained back the advantage. Albert Lea junior Annika Veldman tied the game back up and fellow junior Jordan Juveland made the go-ahead basket, giving the Tigers a small lead which they would hold onto until the halftime break.

It was a low scoring first half for both teams as they headed to the locker rooms with the Tigers maintaining a slim 17-16 lead. Veldman led at halftime with six points. Sophomore Kendall Kenis and Juveland each had four and junior Taya Jeffrey had three.

Coming out in the second half, the Packers took the lead back on the opening possession with a quick basket in the paint. However, Veldman answered right back and gave the Tigers the lead once again.

Albert Lea then jumped out to a six-point advantage. Austin cut the lead to two quickly, but Albert Lea held strong and never allowed Austin to tie the game again.

The second half saw much more scoring than the first, as the Tigers outscored the Packers 28-23 in the second half.

Veldman, Kenis and Jeffrey each ended the game in double figures. Veldman led with 14, Kenis had 13 and Jeffrey had 12.

Notching their third win in a row, the Tigers move to 5-11 on the season and will play again Thursday night when they host the Scarlets of Mankato West in their final home game of the season. The Tigers fell 67-50 when these two teams met earlier in the season.