‘A champion for them and for us’ 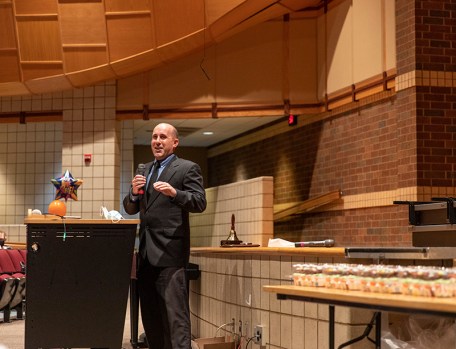 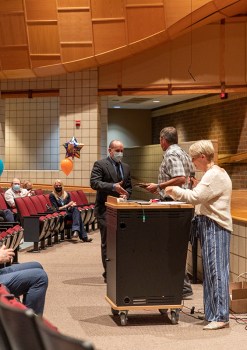 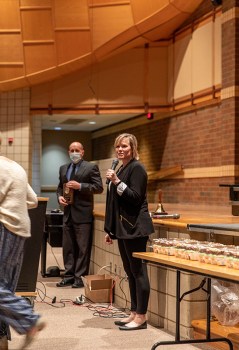 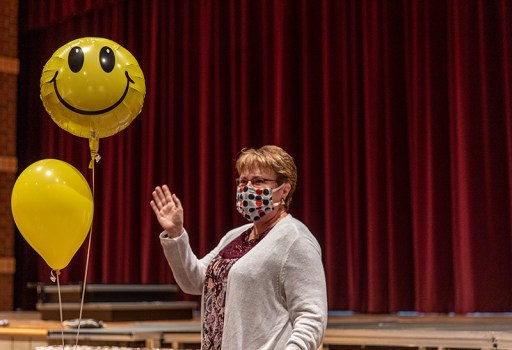 Teacher of the Year finalist Lisa Dugger, licensed school nurse, waves to those in attendance during the ceremony. Hallie Cantu/Albert Lea Tribune 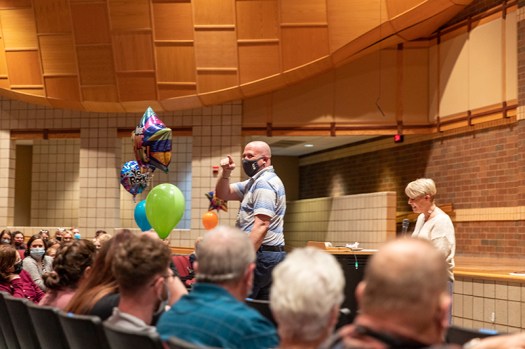 Southwest Middle School teacher Burke Enger, a finalist for Albert Lea Teacher of the Year, waves to those in attendance at the ceremony. Hallie Cantu/Albert Lea Tribune 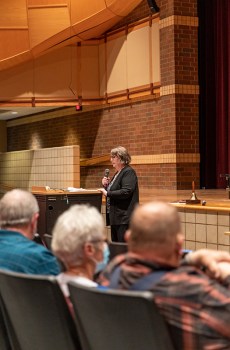 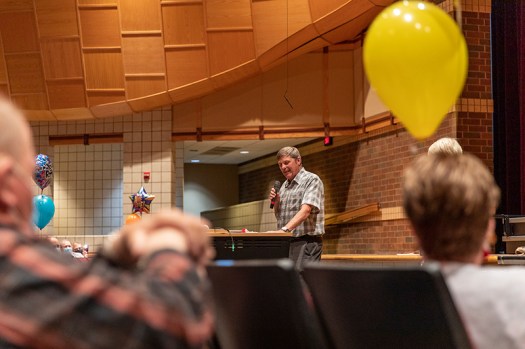 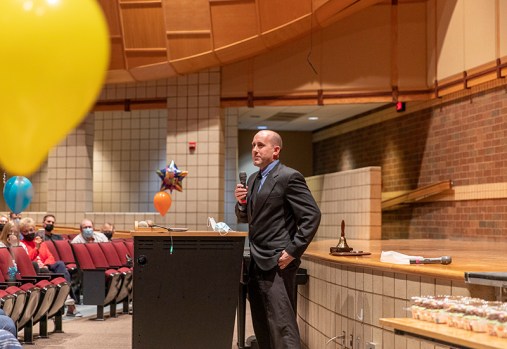 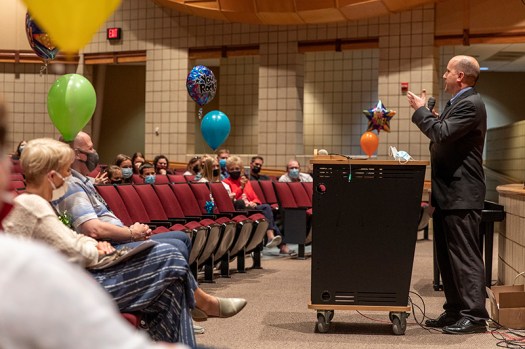 2021 Teacher of the Year Kevin Gentz, a math teacher at Albert Lea High School, speaks Wednesday after being given the award. Hallie Cantu/Albert Lea Tribune

Albert Lea High School math teacher Kevin Gentz was named the 2021 Albert Lea Teacher of the Year Wednesday in a ceremony in the high school auditorium.

Gentz, who has taught in the district for 13 years, has been nominated for the award five times and a finalist for four.

“Kevin doesn’t just care about his students, he cares about all students,” said Kris Burnett, the Albert Lea 2019 Teacher of the Year, who emceed the event and read comments about Gentz submitted by his colleagues.

Other comments stated Gentz is passionate about math and life and has energy that is contagious, noting that even if students don’t like math, they are happy to be in his class.

“His students, our school absolutely know that Kevin Gentz is a champion for them and for us,” Burnett said.

Gentz, who spoke briefly after being awarded both the Teacher of the Year Award by school board Chairman Dave Klatt and the Apple Award by Albert Lea-Freeborn County Chamber Executive Director Shari Jensen, said he has been fortunate to work with great students and wonderful teachers over the years in a subject that is not always everybody’s favorite.

He also spoke highly of the other finalists for the award and thanked the administrators who have supported him through the years, as well as the teachers that prepare and teach students in the younger grade levels.

“Being a teacher, I learned early on that the job doesn’t always end when you go home. It doesn’t end in the evenings, it doesn’t end on the weekends and it doesn’t end during the summer a lot of times,” he said, recognizing his family and the families of other teachers who offer strong support.

Klatt thanked not only the teachers, but also paraprofessionals, custodians and administration for all that they have done particularly in the last year during the pandemic.

Burnett said 81 teachers were nominated for the Teacher of the Year Award — more than any other year.

Burnett said Braaten, who has worked for the district for 11 years, was recognized for her work helping students both in and out of the classroom.

Dugger, who has worked for the district for 16 years, was recognized for her time spent on COVID-19 contact tracing, Burnett said, noting Dugger has her heart at the forefront of her work.

Burnett described Enger as a person who brings “never-ending sunshine” and who has helped start many clubs, including the robotics and coding clubs, at the middle school.

Jensen, Burnett said, shifted roles over the course of the year from starting assuming she was going to be the intervention teacher, to teaching first-grade distance learning and then being changed to teaching third-grade at Sibley Elementary School at Christmastime, noting she always does what is best for the students.

Paula Olson, 2020 Teacher of the Year, who teaches at the Area Learning Center, said the past year had been one of many challenges, but also many triumphs.

She talked about strengths of each of the finalists and pointed out Gentz’s passion for teaching.

“You are what they need — someone who inspires them to come to school and learn,” Olson said.