A surge in the market 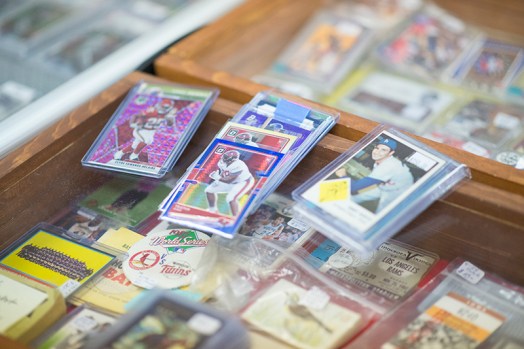 The sports card market has seen a boom recently that has made the value of cards skyrocket and finding a pack of cards at a store nearly impossible. Tyler Julson/Albert Lea Tribune 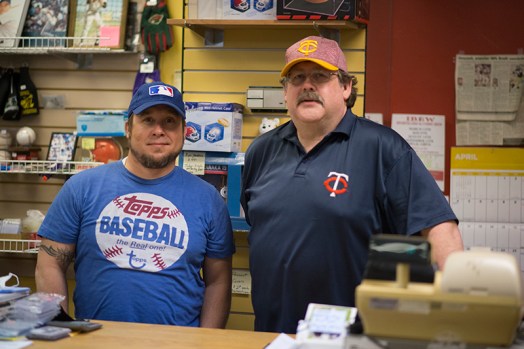 Kevin Dreyling and Mark Rodningen are two of the part-time owners at Trader Jacks in the Northbridge Mall. Tyler Julson/Albert Lea Tribune 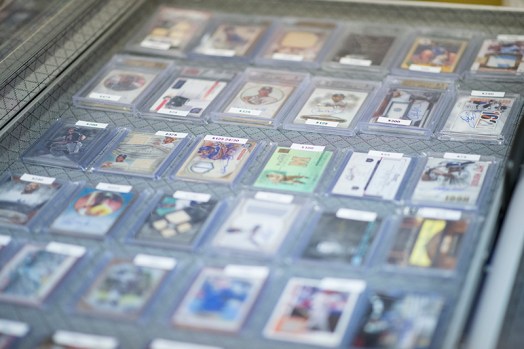 The value of a card depends on its rarity and the condition of the card. Grading companies use a scale of 1-10 to determine a cards condition. Tyler Julson/Albert Lea Tribune

Sports card market booming in area, across the country

Long-time collectors, new hobbyists, investors and gamblers across the country have all recently started flocking to the stores in search of the same thing: sports cards.

Whether it is baseball, basketball, football, hockey — it doesn’t matter — the sports card market all across the United States is at an all time high. For their own different reasons, people are in search of that perfect piece of sports memorabilia.

Mark Rodningen, part-owner of Trader Jack’s in the Northbridge Mall, said the card market is crazier than he’s ever seen it in his 30 years of collecting cards.

“I’d say within the last year it’s been epic,” Rodningen said. “It started probably about two years ago, and it’s just increased exponentially as things have gone on.”

As to why this hobby once popular in the late ’80s and early ’90s has come back into the spotlight,

Kevin Dreyling, another part-owner of Trader Jacks, said there’s likely a multitude of factors that contributed to the rise in popularity. He mentioned COVID-19 making people pick up new hobbies, and allowing more people the extra time to go through their old collections.

Rodningen added he thinks a reason the market has climbed as high as it has, is because there are a number of different groups of people who are interested in the cards.

First there are the “true collectors.” Rodningen said these people have always been around going back to the late ’40s when traditional cards and packs began to be distributed. There are the “investors” and the “speculators.” Rodningen said these people actually invest in the market like it’s a commodity, along the same lines as gold or anything else. Then there are the “gamblers,” “flippers” and “breakers.” These are the groups of people looking to make a quick buck on the market. Gamblers buy random packs or boxes hoping to find a valuable card. Flippers buy cards or packs and hope to sell them for a higher price, and breakers auction off their cards in different forms while opening their packs, usually via a live stream on the internet.

Rodningen said the later groups are the reason why packs and boxes of cards are nearly impossible to find on the shelves at any big box store, and why many of those stores have implemented policies to limit the number of those products one customer can buy on a given day.

“Really, except for the collectors, it all involves money and value,” Rodningen said.

What makes a card valuable?

Ebay and other auction sites are filled with confirmation that some rare cards could be worth hundreds or even thousands of dollars. As recently as Tuesday afternoon, ESPN published a story about a LeBron James rookie card selling privately for the steep price of $5.2 million. But what makes those cards so valuable? Rodningen and Dreyling again said there are a number of factors at play.

The evolution of cards have come a long way in the past 20 years. Some cards now contain authenticated pieces of game-worn uniforms or game-used equipment, such as bats, footballs, gloves or jerseys. There are also cards that come pre-signed with the player’s autograph. But Rodningen and Dreyling both agree, like with many other things, the rarity of the card drives up the value.

“Card companies can manipulate how much supply there is,” Rodningen said. “They make cards that are one of one. That is the only card of that type for that player that exists from that company.”

Unlike 30 years ago, when cards were produced in mass quantities, today’s market had cards in high demand with a somewhat limited supply, driving prices and values sky high.

“You saw it spike in the late ’80s early’ 90s, people got into it for whatever reasons and card companies just churned them out,” Rodningen said. “There’s pallets of that stuff still sitting somewhere that still hasn’t been opened. They exceeded the demand back then. Now, with all these different people looking for cards, the demand is there, but the supply is limited.”

Dreyling gave an example of the boxes of cards they order for customers at the store. Before the boom, a jumbo hobby box from Bowman, which includes a high number of cards and a guaranteed number of autographed cards, sold from $325 to $375. As of recently, those same boxes now sold from $620 to $700, and that was on the low end of products. Rodningen added that a box of Panini Prizm football cards that sold for around $200 last year was now on presale for $2,500.

Dreyling also said the value for a certain player can change from day to day based on that player’s performance in a game.

“A guy hits two home runs in a game yesterday, you could search completed sales from before the game started and look at an identical card that sold today and there’s going to be a bump in price,” Dreyling said.

All of those factors combined make for a rising market.

“If someone is getting into or is already in cards to invest or speculate, it is every bit as complex and far more volatile than the stock market,” Rodningen said.

A lot of the highly valuable cards have been made after 2000, but for those that have a pile of old cards sitting in their attic, don’t worry, as long as those cards are rare and in good condition, they can still hold plenty of value in the market.

Getting a card graded

Getting a card graded by a professional service can increase a card’s value exponentially. The process works by sending cards into a one of many professional services to have the card examined and graded based on its condition. The scale ranges from one, meaning poor quality, to 10, meaning a gem mint condition card.

The companies look at the centering and focus of the photo, stains and marks on the card, as well as numerous other defects. Don’t assume freshly opened cards are going to be a sure gem mint 10, however. Printers can leave marks on the cards as well as print off center leaving some borders thicker than the rest. A gem mint 10 is especially hard to come by.

One of the grading companies also gives out an extremely rare “black-label 10,” meaning all aspects of the examination were given the perfect 10 score. Dreyling gave the example of a Mike Trout card from 2011. A 10 from one company is currently selling for right around $4,500 to $5,000, but that same card deemed a black-label 10, Dreyling estimates would sell for $50,000.

Getting a card graded isn’t cheap, however, at the lowest end of the Professional Sports Authenticator (PSA) service, it would cost $20 per card with a minimum of 10 cards sent in at a time plus the cost of shipping and handling both ways, as well as insurance on high value cards. But in the case of many PSA grading services, operations have been suspended due to the high volume of cards they have received since the start of the card market boom. Dreyling said PSA has about 12 million cards backlogged before they had to shut down operations in order to catch up.

Now, to get a card graded by PSA, usually regarded as the industry standard, card owners are required to pay $300 per card until the backlog can be worked through.

Rodningen said he is approached in the store all the time with people who want to get into card collecting or who have young children who want to start the hobby. His message to all of them is the same — collect what you want to collect. Especially with children, don’t worry about the values right now. Just collect what makes you happy.

“Whatever you want? Collect it,” Dreyling said. “It doesn’t matter if you’re a vintage collector or you’ve got stuff from the ’70s, ’80s, ’90s or today, it takes all of us to keep the hobby going. A few years ago, it seemed like the hobby was dying. Now I see more and more kids showing up to card shows, which is great. It doesn’t matter what you collect, just collect.”