Catherine “Connie” Maxwell passed way on Tuesday, March 30, 2021 at St John’s Lutheran Home in Albert Lea where she had been staying for the last few months. She was 93 years old. 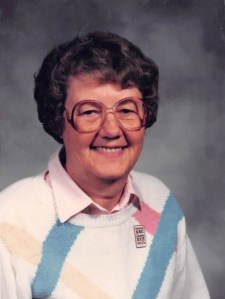 She was a lifelong resident of Albert Lea, having been born on May 4, 1927, to Clarence and Gladys (Iverson) Gunderson. The 2nd of their 3 children. She graduated from Albert Lea High School in 1945 and went to work at Church Offset Printing. While she was working there, she met her co-worker and future brother-in-law, Dan, and introduced him to her husbands’ sister, Margaret.

Connie met her future husband through her sister, Dot. Her father, Gundy, was originally not impressed with this young man, who would come roaring in the driveway on a motorcycle to pick up his daughter. Connie married Robert Maxwell on Oct. 11, 1950 at First Lutheran Church in Albert Lea. It was a small, private ceremony, because he was getting ready to leave for Wichita Falls, an Air Force base in Texas.

She quit work when the children came along and became active with First Lutheran Church as a Sunday school teacher and later with the altar guild. She was also PTA president and a Brownie/Girl Scout leader. She also enjoyed her time with her friends. She bowled on the Coffee league (and even had a 300 game!) and played cards in a ‘500’ card club. She was also an avid bridge player, playing on 2 different bridge clubs, with her friends Cindy and Charlie. Besides playing cards and bowling, she loved to read. She always had a book, magazine, or newspaper in her hands. And she passed on that love of reading to her daughter, Nancy, and granddaughter, Kelly.

Once the children were in school, Connie went back to work. First at Viking Photography as a receptionist/bookkeeper. Then later, working for the school district as a media clerk at Lakeview Elementary until her retirement in 1990.

Bob and Connie loved to travel and went camping out west nearly every summer in their pickup camper. Before the children came along, they did a lot of motorcycle riding with his buddies. And they dearly loved getting together with their friends on the weekends for barbeques and picnics, always dragging the kids along. Many happy memories were made in those days.

Those preceding her in death were her parents; brother, Leroy Gunderson and his wife Jane; sister, Dorothy Wayne; nephew, Bruce Gunderson; niece, Kathy Wilkes; and brothers and sisters-in-laws, Dorothy and Albert Emstad and Dan and Margaret Kruse.

Memorial services will be held at a later date.