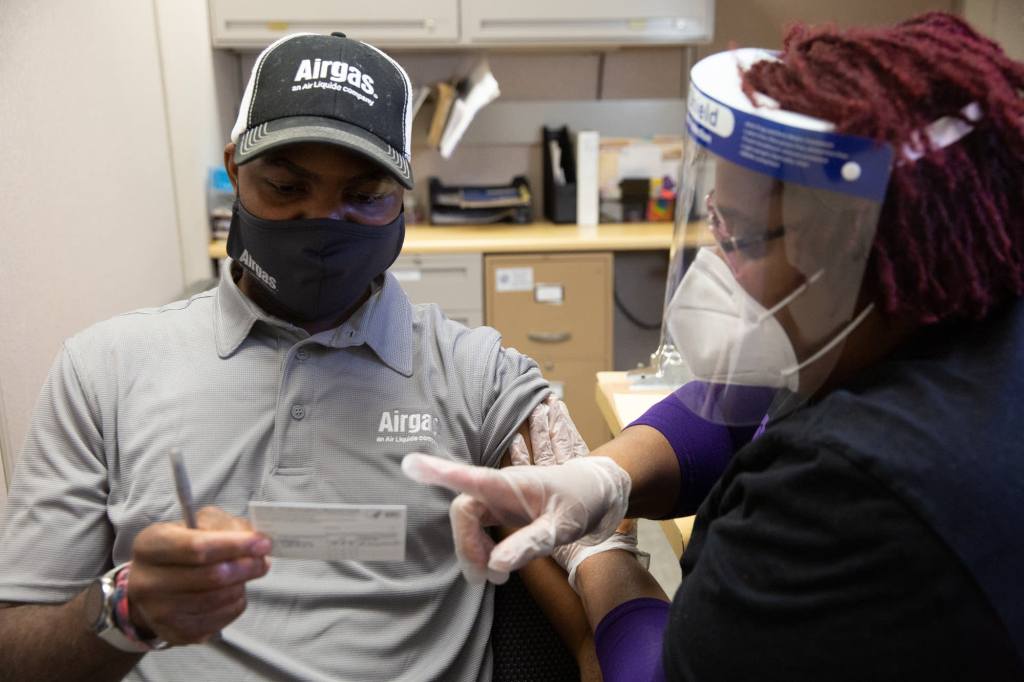 Active case counts haven’t been this high since late December. Hospitalizations and intensive needs are climbing to where they were back in mid-January. Daily deaths are trending at February levels.

There’s a crucial difference, though, between winter and today. Minnesota’s vaccination pace is firmly on the upswing, with daily shots trending at an all-time high and the state seemingly on track to have 50 percent of adults vaccinated within two weeks.

State health officials on Saturday reported a record single-day total of 89,214 vaccine doses administered, pushing the number of Minnesota adults with at least one dose of a vaccine close to 2 million.

The lingering question yet to be answered: Can the state vaccinate enough Minnesotans quickly enough to hold off a big surge in the disease as variants get a stronger foothold in the state?

The agency reported nearly 90,000 more shots given. The seven-day trend is the highest since vaccinations began in late December.

Thanks to the vaccination push, Minnesota likely won’t see as severe a spike in cases this spring as it saw in November and December, but the pandemic isn’t over, Minnesota Health Commissioner Jan Malcolm told reporters earlier this week.

“We’re definitely not out of the woods yet,” Malcolm added, noting that the seven-day positive test rate for the disease is back up at 6 percent. A 5 percent rate is a warning sign of growing spread.

Hospitalizations, for instance, have climbed significantly in the past few weeks to levels not seen since January. The most recent agency data shows 595 people with COVID-19 in Minnesota hospitals; 134 needed intensive care.

ICU needs have doubled over the past month.

The age of those needing hospitalization has been skewing younger. The average age of people hospitalized during the pandemic is 65, but it was 57 years old from March 23 to 29, Dr. Ruth Lynfield, the state’s epidemiologist, said this week.

The number of known, active cases has been trending upward over the past few weeks, with more than 19,000 as of Saturday’s report — marking more than three weeks with active daily counts above 10,000.

It’s also the first time since before Christmas that active cases were greater than 19,000.

While still low compared to late November and early December, the rising trend is notable given the worries over the rise of the highly contagious U.K. COVID-19 variant, which state health officials suspect is driving the current upswing.

The state has now confirmed about 1,600 cases of the U.K. strain, Lynfield said Thursday, adding that it’s linked to five deaths here and likely responsible for the majority of the spread happening now.

Twelve deaths reported on Saturday raised Minnesota’s overall pandemic death toll to 6,944. Among those who’ve died, about 62 percent had been living in long-term care or assisted living facilities; most had underlying health problems.

The state has recorded 540,277 total confirmed or probable cases so far in the pandemic, including 2,454 posted Saturday. About 95 percent of Minnesotans known to be infected with COVID-19 in the pandemic have recovered to the point where they no longer need to be isolated.

Regionally, all parts of Minnesota are in better shape than they were in late November and early December. The latest numbers, however, show cases creeping up across the state.

Public health leaders continue to keep watch on clusters popping up over in recent weeks in the southwest Twin Cities metro area as well as Mankato in southern Minnesota, in central Minnesota and around Aurora and Ely in the northeast.

People in their 20s still make up the age bracket with the state’s largest number of confirmed cases — more than 101,000 since the pandemic began, including more than 52,000 among those ages 20 to 24.

The number of high school-age youth confirmed with the disease has also grown, with more than 43,000 total cases among those ages 15 to 19 since the pandemic began.

With kids increasingly returning to school buildings and sports, Minnesota public health officials are urging Minnesota families with children to get tested every two weeks for COVID-19 until the end of the school year.

Caseloads among people of color

Even as new case counts continue to track well below their late November, early December peaks, the data shows Latino people continue to be hit hard.

Officials have acknowledged that distrust by communities of color has been a problem during the pandemic. They’ve offered up some data on vaccinations broken down by race and ethnicity that they’re updating regularly.

Freeborn County on Saturday reported nine new cases. It has had 3,194 cases since the pandemic began and currently has 97 active cases. No new hospitalizations or deaths were reported.

As of Thursday, 11,172 people in Freeborn County have received at least one dose of the COVID-19 vaccine, and 7,243 people have received the completed series.

• Faribault County: five new lab-confirmed cases; 1,416 total cases; 4,901 people had received at least one dose of the vaccine and 3,428 had received the completed series.

• Steele County: 17 new lab-confirmed cases, three probable cases; 3,466 total cases; 12,464 people had received at least one dose of the vaccine and 7,805 had received the completed series.