Elyce Arvidson, age 84 of Golden Valley passed away peacefully April 1, 2021. She was born to J. Eberhart and Elsa (Froid) Lundquist in rural Buffalo, MN October 24, 1936. Following graduation from Monticello High School she graduated from Augsburg College in 1954. She married Marvin in April of 1960 in Little Falls, MN. 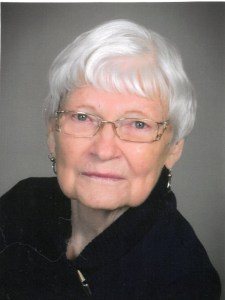 Elyce’s Christian faith was the foundation of her life – to her devotion to family, vocation, friendships, and service.

She spent her social work career first in child and family welfare, but largely in medical social work in Princeton, IL and Albert Lea. While at Naeve Hospital she worked particularly to develop many new community programs  including Naeve Home Health, Crossroads Community Hospice and Naeve Partners in Health. Elyce also served the community through volunteer work and on community boards.

She was active throughout her life in music as a member of choral groups, a pianist, a choral director and an organist, especially in service with the churches to which she belonged. Elyce served in other ministries of the church including as a participant in the establishment of Stephen Ministry at First Presbyterian Church, Albert Lea.

She and Marvin enjoyed retirement years back in Buffalo, MN and took many motorhome trips coast to coast as well as to visit with family. They moved to Covenant Living of Golden Valley in 2015, continuing hospitality to others and an active life.

She is mourned by her husband, Marvin; children Kirsten (David) Scott; Kaelene (Dan) Arvidson-Hicks; and a son Kurt (Carin).  She also leaves behind seven grandchildren: Colin (Lindsey), Peter (Becca fiancée), Jacob (Heather), Hannah, Jared, Hans and Sannah.  She was preceded in death by her parents and her brother, Vernon.

Memorials may be directed to Covenant Living of Golden Valley Benevolence Fund or Arthritis Foundation. A memorial service will be held at a later time at Salem Covenant Church.