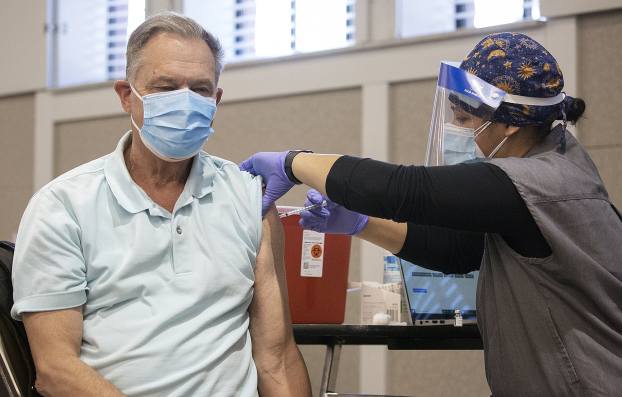 In rural Minnesota, fighting vaccine hesitancy one community at a time

Elaine and Florian Fautsch could have gotten their COVID-19 vaccines a couple of months ago.

The Sauk Rapids couple is in their 80s, so they were among the first groups to be eligible, because people their age are at the highest risk of serious illness or death from the virus.

They took the COVID-19 threat seriously. But they also weren’t venturing out of the house much during the pandemic, so they didn’t feel a sense of urgency to get the shot.

“I was kind of waiting to see how it transpired at first,” Elaine Fautsch said. “Being that we’re this age, we just thought, ‘Well, we’ll just wait and see if it was safe.’ ”

“We stretched it out as long as we could,” Florian Fautsch said.

That hesitation to get vaccinated is common in rural Minnesota. As of April 20, just 32 percent of eligible residents in Benton County, where the Fautsches live, had received a dose of the COVID-19 vaccine, according to data from the Minnesota Department of Health. It’s one of the lowest percentages of any Minnesota county, well below the statewide number of 53 percent.

Just two months ago, health care providers were struggling to procure enough precious vials of vaccine to quench the seemingly limitless demand throughout the state. The state, in turn, implemented a phased distribution rollout to make sure the most vulnerable populations could get it. And people eager for immunity spent hours scouring pharmacy websites for appointments and driving hundreds of miles to get one of the scarce doses.

But as that problem has abated thanks to an increase in available vaccine, a new one has risen to replace it.

“We’re at this shift, where in some communities, the supply is no longer the problem,” said Carrie Henning-Smith, deputy director of the Rural Health Research Center at the University of Minnesota. “It’s really a question of demand, and making sure that people want to get the vaccine.”

So now, public health officials in Minnesota and around the country are trying more creative ways to convince people like the Fautsches to get vaccinated. If they fail, levels may fall short of the 70 to 80 percent vaccination rate they say is needed to reach herd immunity, the point at which so many people are protected that the virus is unlikely to spread.

Without herd immunity, the virus will continue to circulate and may mutate in ways that render the vaccines less effective over time. That could lead to more infection, death and disruption.

Nationally, a recent survey from the Kaiser Family Foundation found about 1 in 5 rural residents say they definitely will not get vaccinated against COVID-19. That number hasn’t changed much in recent months, even though more than half of Americans have received at least one dose of the vaccine, with few reported cases of serious side effects.

The Republican president repeatedly downplayed the seriousness of COVID-19 during his final year in office, incorrectly likening it to the flu, resisting mask use, promoting quack cures — and even contracted the disease himself.

“We’ve also seen COVID be really politicized, really in very harmful ways,” she said. “As COVID was moving through the country and moving into rural areas, we were getting very mixed messages.”

People with conservative political beliefs were more likely to buy into the idea that the coronavirus wasn’t a real threat and they weren’t at risk,  Henning-Smith said.

“This reasoning that COVID isn’t that serious,” she said, “leads people to feel like they don’t need to take the vaccine, without thinking of it as a collective responsibility.”

Henning-Smith worries that attitude could prolong the pandemic.

Health officials say there are other reasons why people in rural areas may not be getting vaccinated, including a lack of transportation, access to technology to make online appointments and — as was the case with Florian and Elaine Fautsch — concerns about the vaccine’s safety.

As the months went by, Elaine Fautsch grew tired of depending on her daughter to deliver groceries. Finally, in early April, she went to a St. Cloud clinic to get her first dose of vaccine. But Florian Fautsch doesn’t like going to the doctor.

So a couple of days later, the family found a place he was more comfortable getting his shot. Elaine Fautsch took her husband to Foley, a rural farming town a 20-minute drive from their home in Sauk Rapids.

He received his shot in a room with thick red carpet and a wooden cross on the wall. For a few hours, the First Presbyterian Church in Foley was converted into a mobile vaccination clinic run by CentraCare, the region’s major health care provider.

“When they’ve been here before, it’s been a very comfortable place to be,” said their daughter, Jill Emery, who is a member of the church. “It’s not the antiseptic smell, sights, etc., that a hospital or or even a doctor’s office has.”

Health officials say that providing vaccinations in familiar and trusted places could help their efforts to widely distribute the COVID-19 vaccine, especially in parts of the state where hesitancy toward vaccination is stronger.

Debbie Corrigan, a CentraCare nurse and vaccinator, is also a longtime member of the close-knit congregation at First Presbyterian, where large families sometimes fill three or four pews.

Corrigan said she knows quite a few people who are still not convinced that they want the vaccine, but she said that seems to be changing. All 50 of the available vaccination appointments at the church filled within a couple of days.

“If there’s people who are maybe on the edge about getting vaccinated, this might just be that one piece that engages them and brings them to us,” Corrigan said.

Beverly Brock, the lone pastor of the 130-member church, said some in her congregation are still nervous about getting the shot.

“Some folks have clearly said they don’t trust it and they’re not going to get it, and it’s a mixed bag within families,” she said. “I tell them, ‘I’ve had mine. I feel safe about it.’ ”

Health officials say that type of testimonial is key to encouraging more people to get the vaccine — especially in small towns, where the voice of a neighbor or trusted community member carries a lot of weight.

CentraCare is using a similar approach to reach other populations that might be less likely to get the vaccine, such as communities of color. The health provider recently held a vaccination event at a St. Cloud mosque just before the start of the Muslim holy month of Ramadan.

“I don’t want to pressure people into getting the vaccine, if that’s truly their core belief that they’re never going to get it. That’s their right, absolutely,” said Ashley Jude, who coordinates CentraCare’s mobile vaccination team. “But if there are people that are somewhat open minded or they have questions, I am not one to say, ‘Let’s give up.’ “

4 weeks left and $1 billion to bridge for Minn. lawmakers

By Brian Bakst, Minnesota Public Radio News This time of year at the Capitol is typically when top lawmakers strain... read more